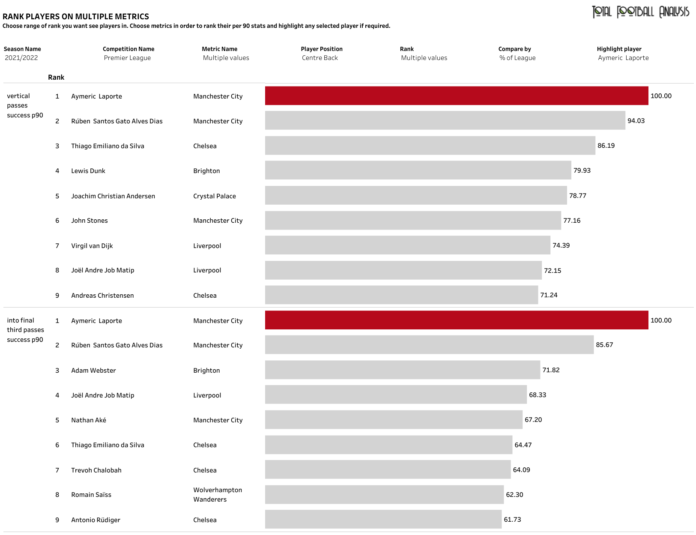 Aymeric Laporte is having one of the best seasons of his career with Manchester City this year, and he is in great form as his team is nine points ahead of second-placed Liverpool going into the international break. Laporte was not a regular starter for Manchester City last season and was left on the bench 13 times by his manager. He only made 16 appearances in the 20-21 season and also faced several injuries.

Following an excellent start to life with the Spanish national team at the Euros, Aymeric Laporte was said to be the best partner for Ruben Dias for Manchester City. Although John Stones had an excellent comeback season for the Cityzens, he was shaky at times toward the end of the season, while Laporte looked increasingly comfortable when fully fit. Laporte never fell behind in the pecking order due to poor performances, but rather due to lack of fitness and repetitive injuries.

The centre-back has worked his way into the starting XI this season and has already made 19 appearances, being the first choice centre-back for his manager. The Spanish international has also scored three goals in the season and recently scored a goal for his team which helped Manchester City earn a point against a very stubborn Southampton side.

Let’s take a look at his stats so far this season and how he has cemented his place in Guardiola’s starting XI: 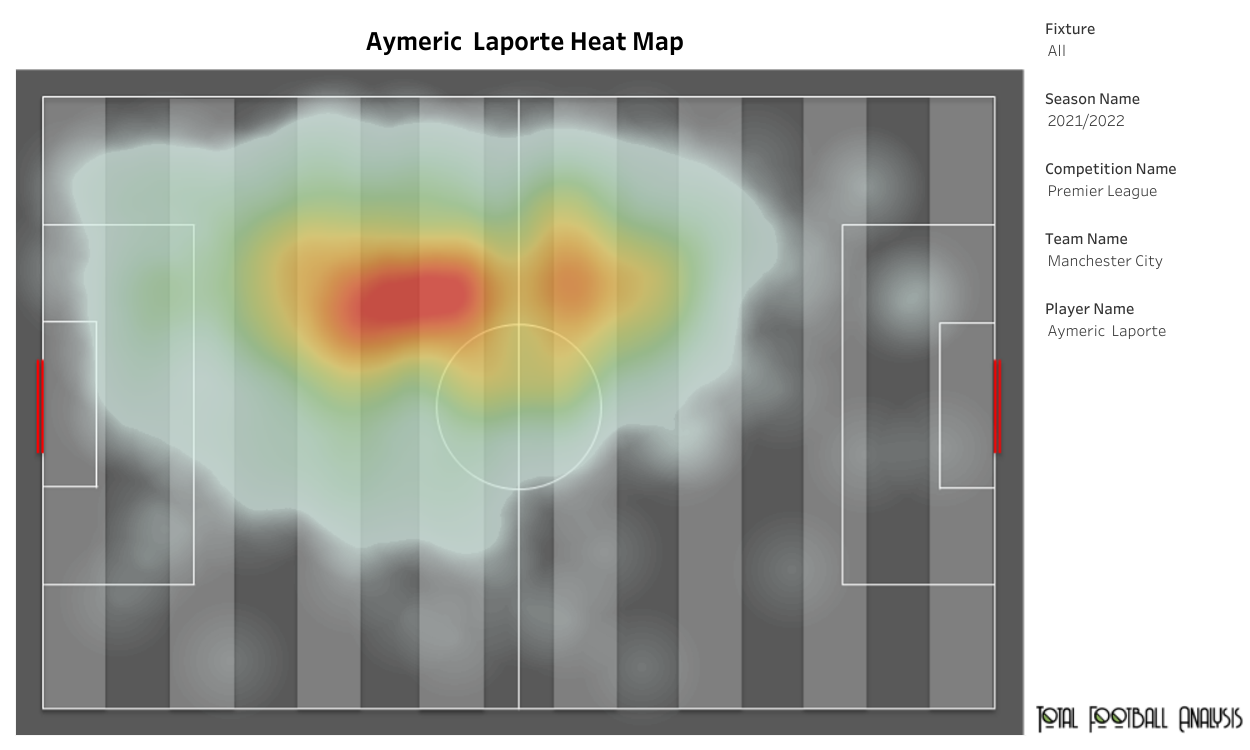 Laporte is a left-footed player who likes playing as the left-sided centre-back. He is extremely versatile and can also play at full-back if required. As the heatmap suggests, Laporte has started as the left centre-back for City alongside Ruben Dias, and they have formed one of the best defensive partnerships in Europe. The centre-back has amazing game sense and can read the game well from behind. Moreover, he is superb on the ball and helps in building play from the back. 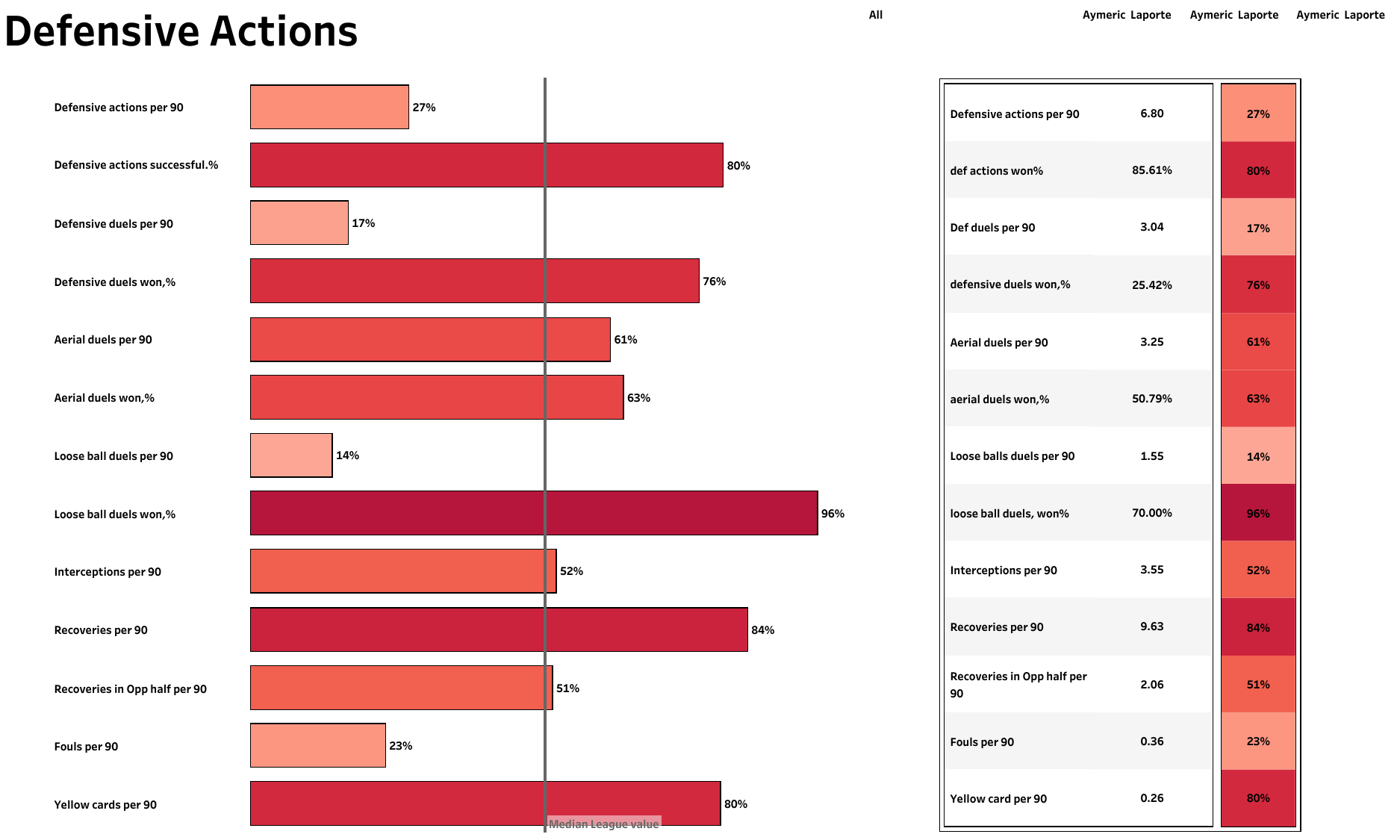 Laporte has helped his team keep nine clean sheets so far in the Premier League, and City have only conceded 11 goals when they have had Laporte as their centre-back. He has had a very impressive record so far. The above visual shows us the defensive metrics for Laporte from the 2021-22 season. Laporte has attempted only 6.80 defensive actions per 90 minutes as City haven’t faced many attacks from the opposition due to the way they press their opponents in the opposition half. But from the limited defensive actions Laporte has attempted, he has been able to win 85.61% of those duels. He has the highest success rate in winning loose ball duels and helping his team recover possession of the ball. 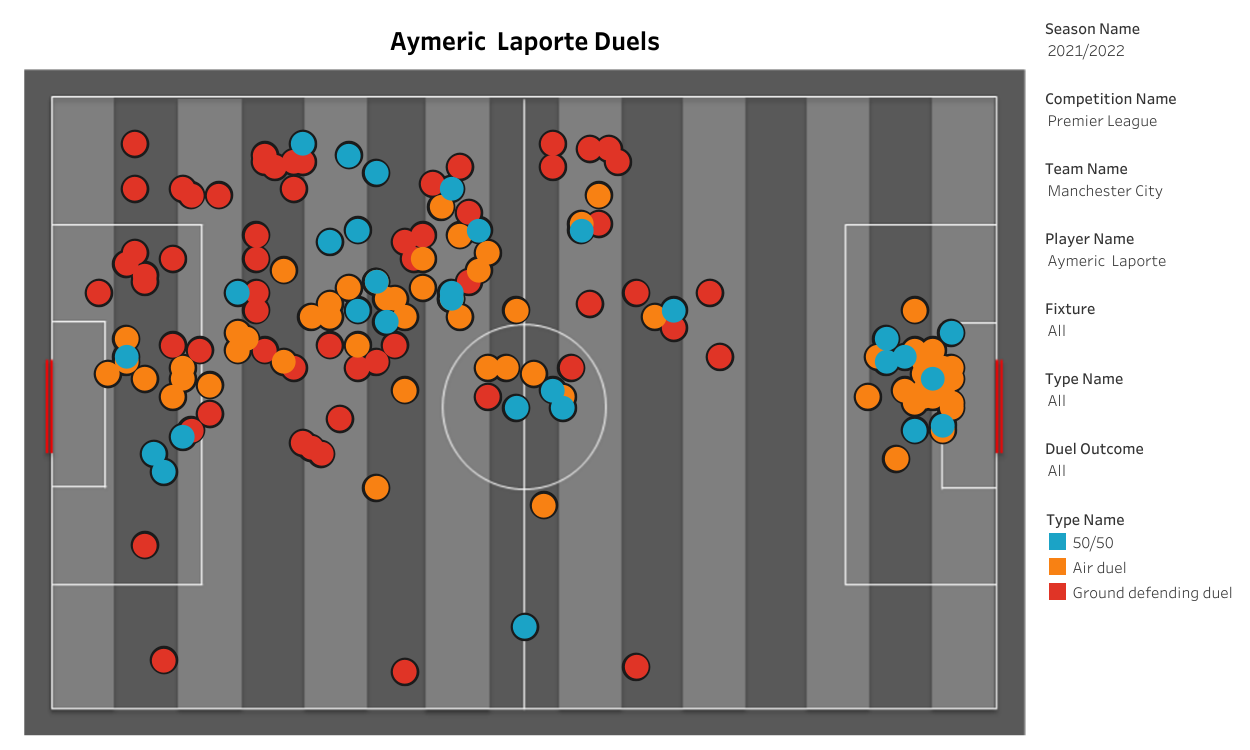 Manchester City look to dominate games through possession and having a high defensive line to be able to counter-press after. This indicates why Laporte has attempted so many duels higher up the pitch near the halfway line. Laporte has a great sense of understanding of how the opposition attackers are trying to play, and he positions himself accordingly to defend against them. He has won most of the defensive and aerial duels he attempted. Laporte is also a huge threat in the opposition’s half and can score goals from set-piece situations as he did against Southampton on the weekend. 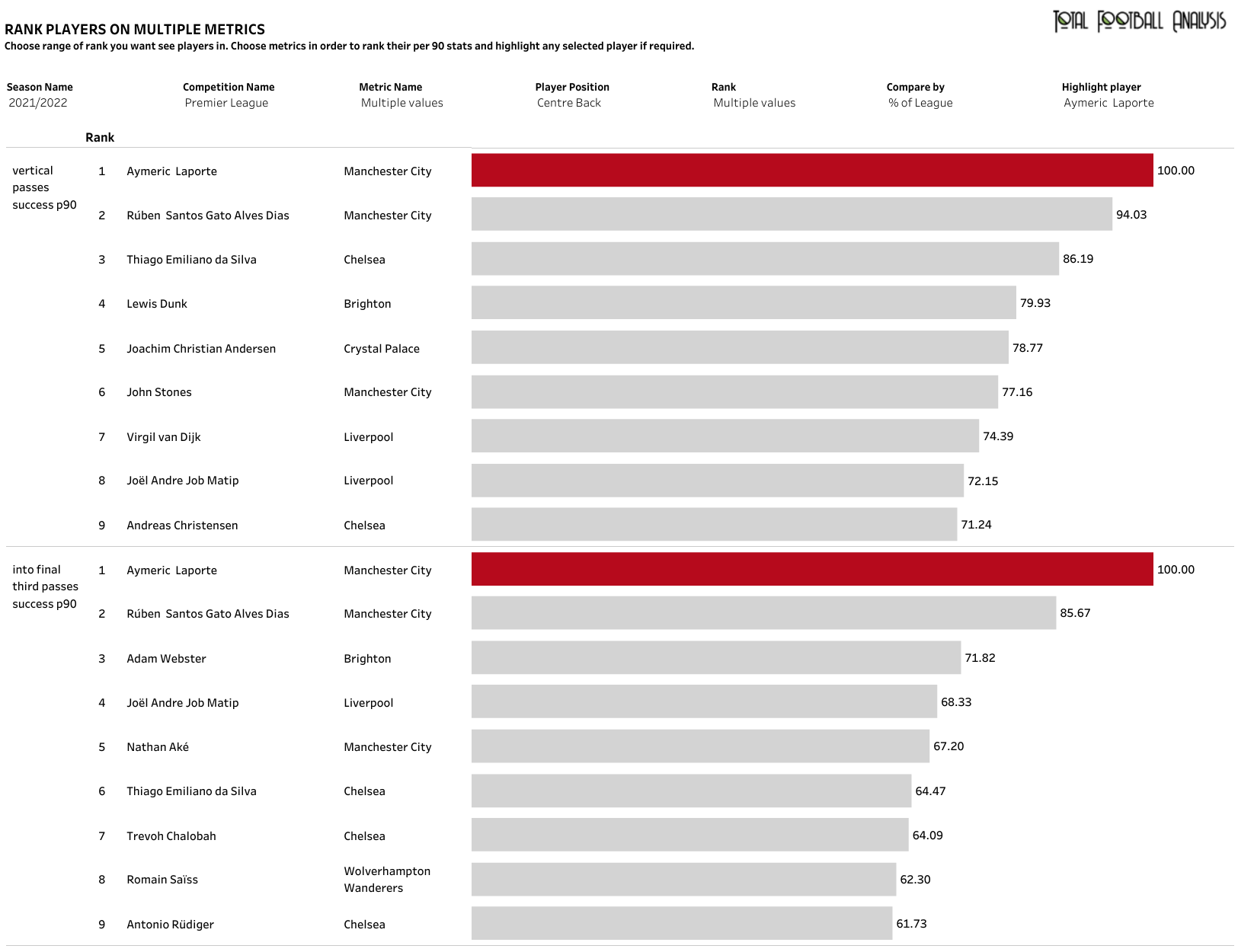 Since City usually dominate possession, the build-up has to start from the centre-backs. He is very composed on the ball and can even gain a few yards with the ball at his feet. City normally plays with two centre-backs. Given how good he is with the ball at his feet, he is influential during build-up phases and can take responsibility for bringing the ball out of defense and passing it to midfield. He’s not a defender who just passes the ball from side to side; instead, he’s always looking for a way to get the ball to a more forward teammate and move the ball forward. He is very calm on the ball and always tries to find the right progressive pass so that his team can build an attack. The above visual indicates that Laporte ranks the highest for successful passes into the final third per 90 and also vertical passes per 90. This proves how influential Laporte is for City’s style of play as he is the one who initiates the attack from the back.

Overall, Laporte is the ideal man for Manchester City and Pep Guardiola. He is an elite player who fits perfectly into his manager’s system. Over the past few months, there have been rumors that Barcelona are interested in signing the centre-back, but Pep Guardiola will try to keep the defender at City as he is an influential figure in the squad and also a very important player for his team moving further into the season.

Statistical Analysis: Manchester City back on top after win over Brighton

Under the microscope: Erling Haaland – The Norwegian superstar ready to...