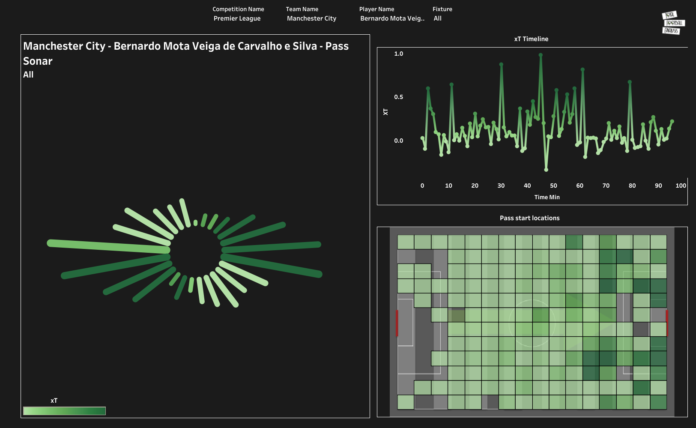 Manchester City completed their 11th consecutive and 17th win of the season against Arsenal to maintain their lead in the Premier League. It was Bukayo Saka who struck for Arsenal first, but a penalty from Riyad Mahrez and a late strike from Rodri sealed the victory for the Cityzens. It was Bernardo Silva, who was playing a much deeper role for City, who created several chances for City and was an influential figure in their starting XI.

Bernardo Silva has been Manchester City’s best performer this season, as they sit on top of the Premier League and are safely through to the last-16 of the Champions League. He is the top goal-scorer for Manchester City in the English Premier League 2021-22 season. The Portuguese was hailed by Pep Guardiola as the best player in the league after his sparkling performances in the season so far. It was rumored in the summer transfer window that Bernardo Silva might opt to leave Manchester City, citing game-time issues. Luckily, nothing worked out at the time, and things have drastically changed for the Portuguese this season.

Bernardo was at the same level in 2018-19 when City fans wondered how they would work out the gap of losing Kevin de Bruyne, and Bernardo stepped up to show he is on the same level as the brilliant Belgian. A loss of form the following season, amid unhappiness in his personal life, saw him ask for a transfer to leave, and he was not guaranteed a place in the side. His return to his best coincided with City’s surge to the title last season. Bernardo was a key man in that run to the title and the Champions League final, barely missing a game, and he has moved up another level again this season. 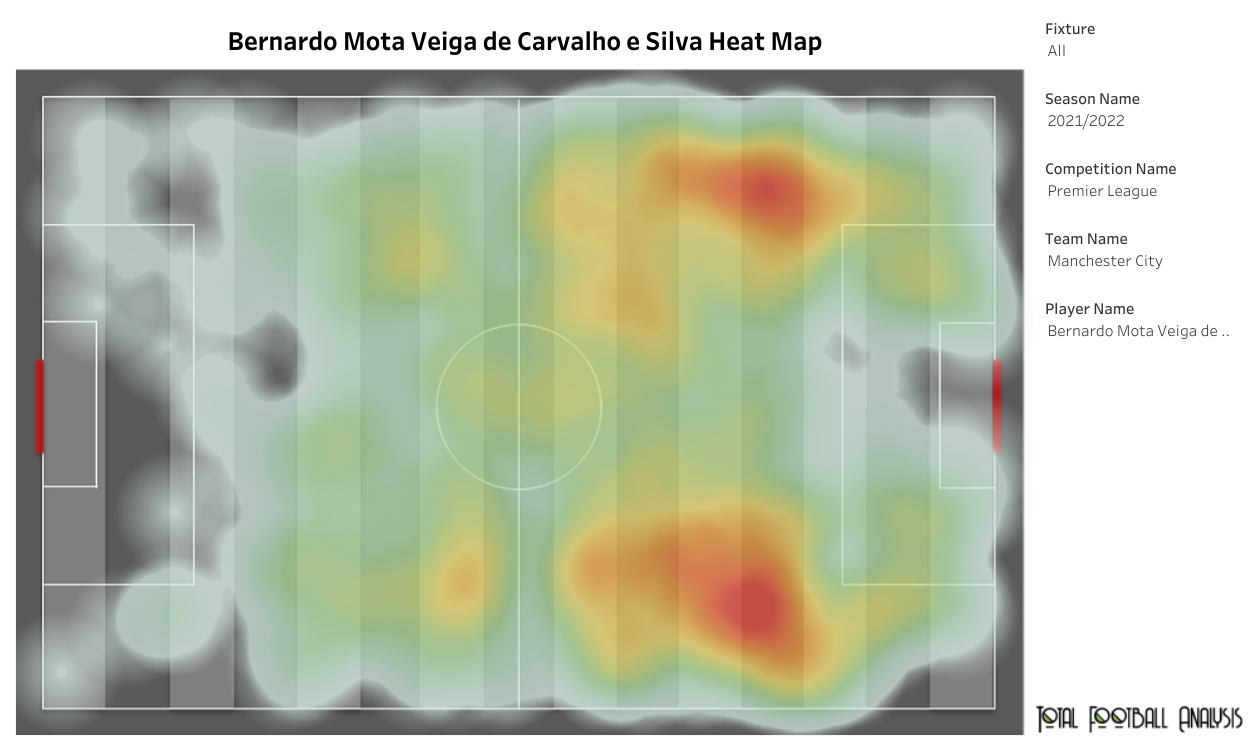 The above visual shows us the heatmap for Bernardo Silva. The viz indicates that Bernardo has had a high work rate and had played in different positions. The fact that he plays in six different positions, from defensive midfielder to false nine, and excels in all of them, gives you an indication of his all-round football ability. As seen in the above visual, Silva has played in various positions, which includes playing as a wide forward in the front three or even in a deeper role in the midfield. The Portuguese midfielder has been very lively in midfield and has done well with his high work rate. 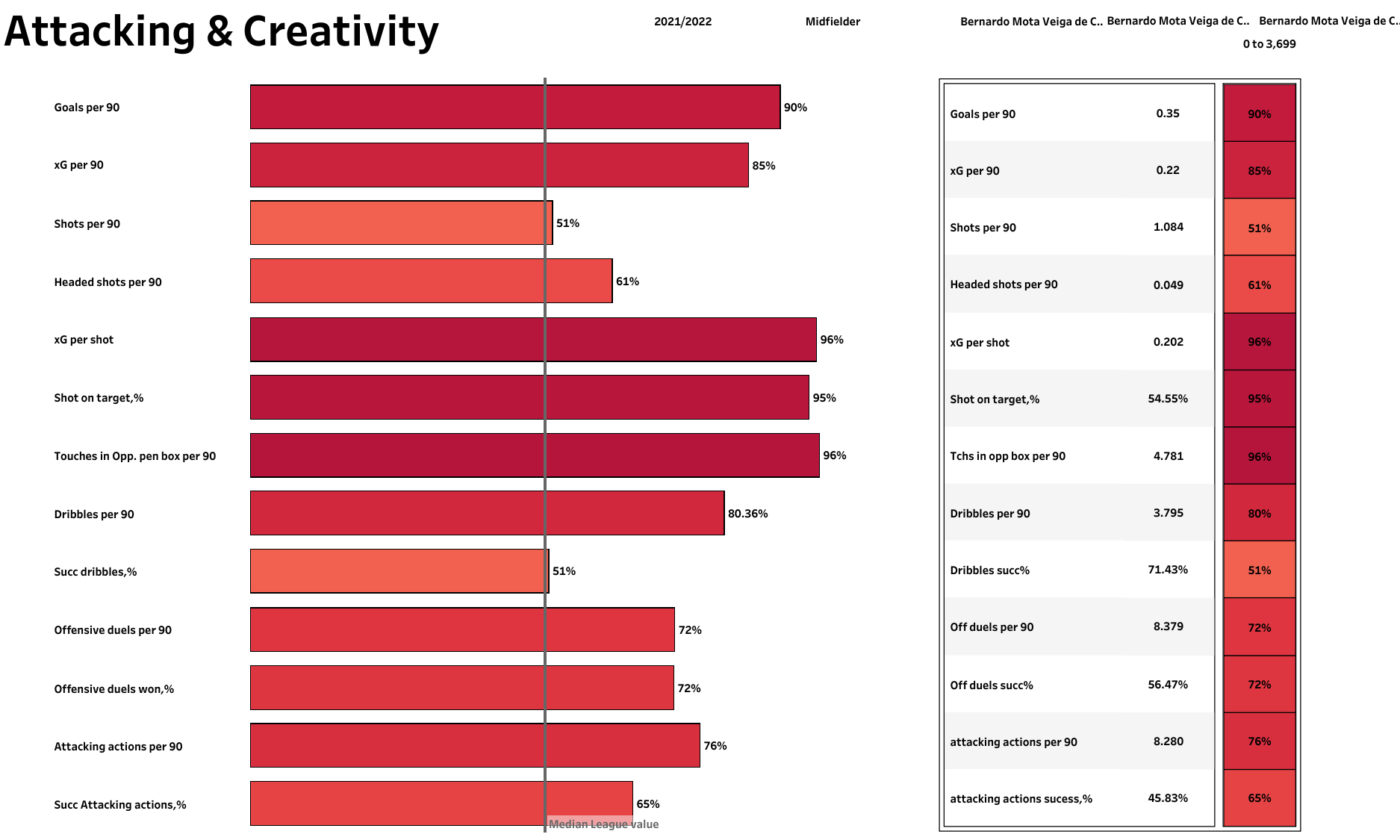 The 27-year-old has been sensational this season, scoring seven goals and providing one assist in 20 appearances for the Sky Blues, outnumbering his previous season stats of two goals and six assists in 26 matches. Silva has attempted 8.28 attacking actions per 90 minutes and has been able to complete 45.83% of these attacking actions. He has a high shot on target percentage of 54.55% and also has attempted 3.795 dribbles per 90 minutes. He has completed 71.43% of the dribbles he has attempted and can get into threatening positions. Dribbling past players 55 times this season, he’s one of the best in doing so. His ability to carry the ball with speed and be creative at the same time has proved to be a blessing for Pep Guardiola. 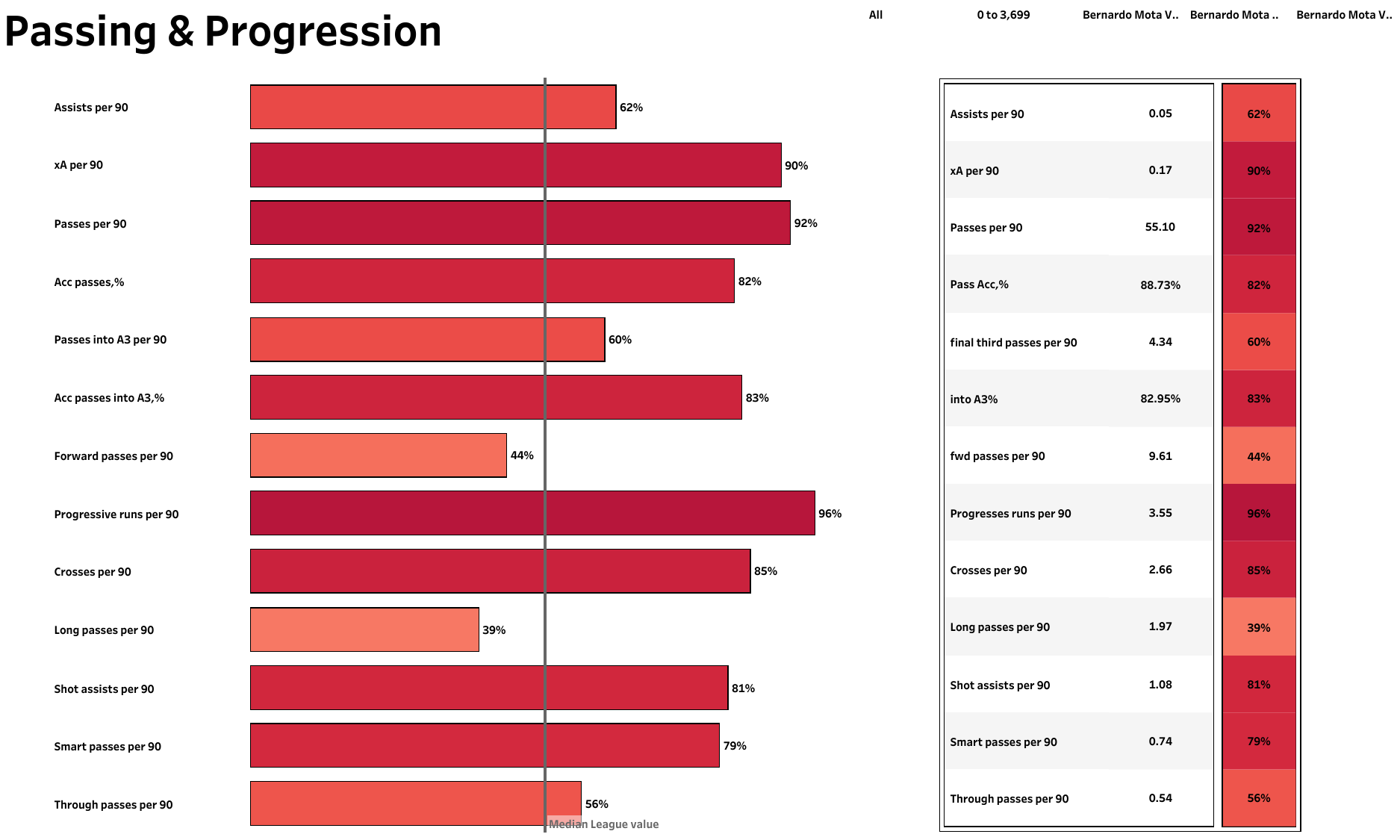 Silva has attempted 55.10 passes per 90 minutes and has completed 88.73% of these passes. He is highly effective in the final third with the ball and can play defense-splitting passes to his attackers. He has a brilliant left foot and can play a wide range of passes depending on the position that he is playing in. He has attempted 3.55 progressive runs and is better than 96% of the players in the league for the same. 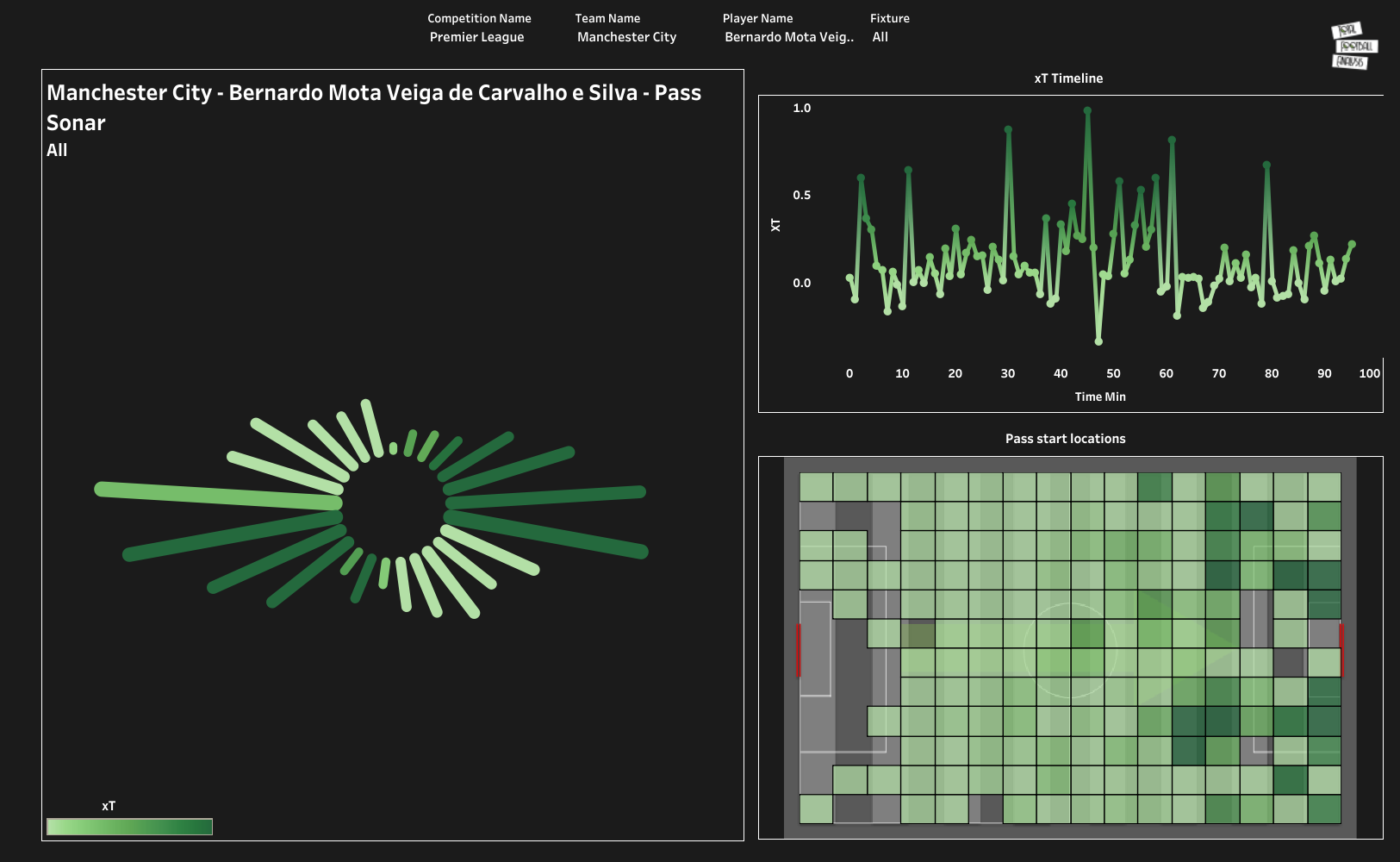 The above visual shows us the pass sonar for Jota. It also indicates the pass start locations and the xT these passes have generated. From the visual, we can see that as Silva has played on both flanks, he has played many passes towards his right as well as left, and these passes have generated a high xT. The pass start locations indicate that he loves playing in wider areas and can put great crosses into the penalty area. The xT timeline indicates that he has an average xT of above 0.5 and is a constant threat throughout the game and can change the result of a game within seconds. 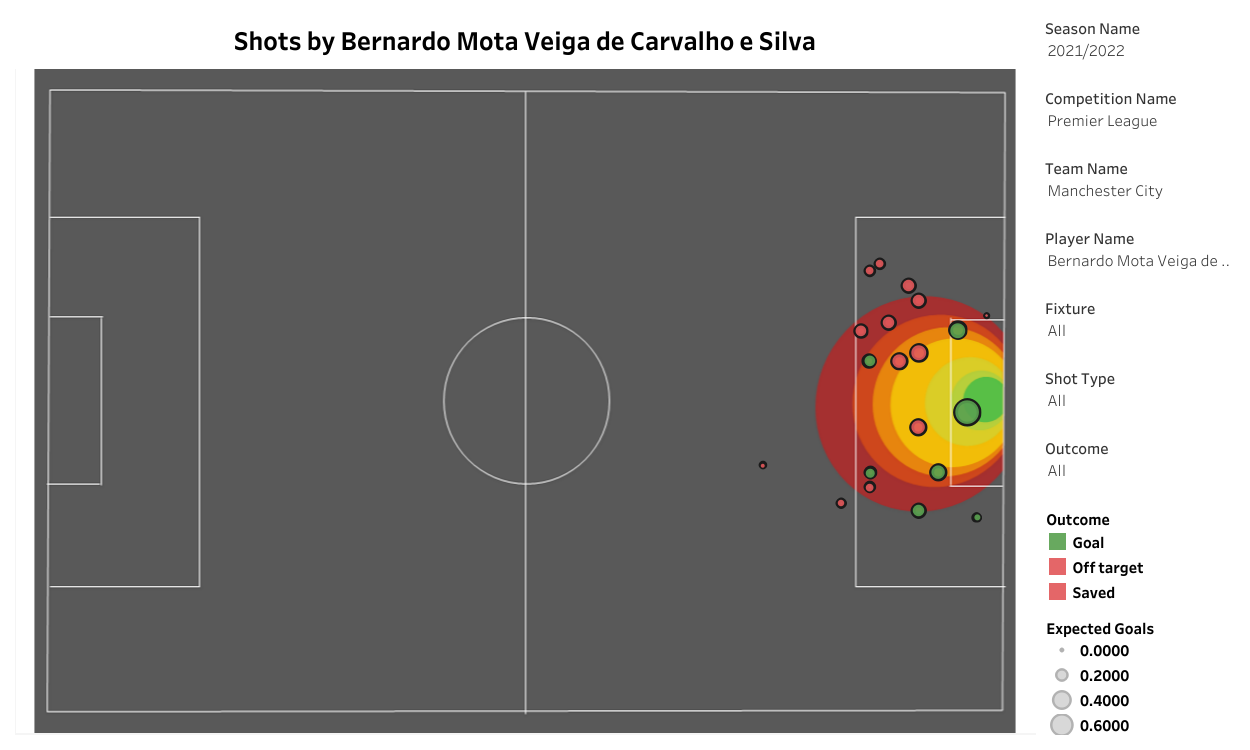 Bernardo Silva has surely cemented a place in the starting XI this season and will be looking to continue with the same form in 2022. Silva has simply been the best player on the pitch for Guardiola and a transfer is unlikely to happen, at least in foreseeable future, with Manchester City expected to be a bit more cautious this time around with the Portuguese’s future at the Etihad.

Hit or Miss: 4 of Guardiola’s Biggest Calls as Man City...

Let him go: Why Man City should accept an offer for...