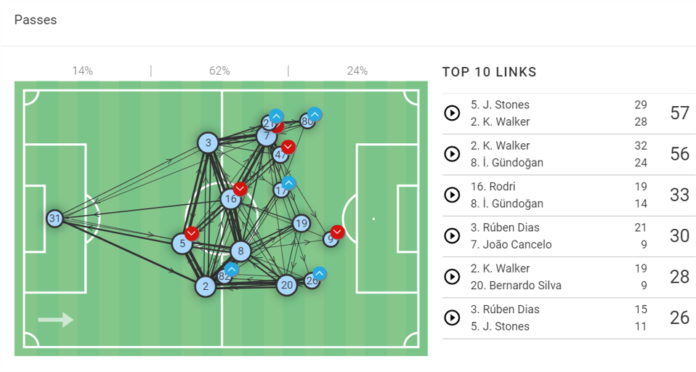 Manchester City travel to Villa park to face Aston Villa in the English Premier League. The defending champions are behind Arsenal in the league table and will look to put pressure on them. Aston Villa, on the other hand, are on a poor run and sit in the relegation zone.

Aston Villa have just earned three points in the first five games. They have lost four games, including the last three, and are struggling for points. Steven Gerrard’s men have struggled to find the back of the net. They have just scored four goals but conceded nine. Their struggle to attack is the main reason behind their poor position in the league table.

Manchester City are looking like a team to beat this season. They are undefeated, with four wins and a draw in five games. They are getting past the opposition defence easily and have scored 19 goals. Their defence has leaked five goals, with three conceded against Newcastle United and two against Crystal Palace. Pep’s men netted six goals in their last match against Nottingham Forest and will look to carry this momentum into this game. Based on the stats, we look at 3 things that could affect the outcome of this encounter. 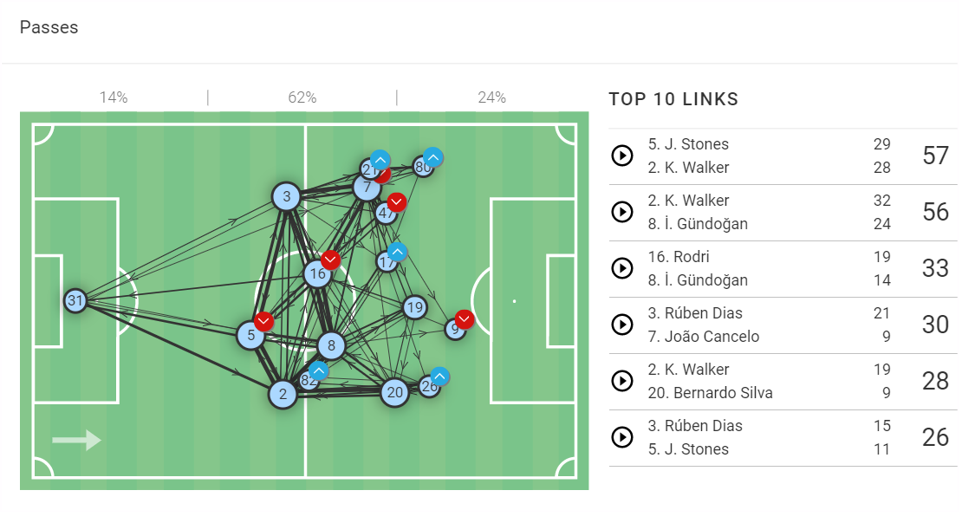 Manchester City have attempted the most passes this season. They average 730 passes per match with a high accuracy rate of 91.8%. The average possession rate for Pep’s men is 71.53%, and this shows that Aston Villa might find it hard to keep the ball. In the last match, they played with two strikers. There are more chances that Pep will start with an additional midfielder against Aston Villa to add more creativity. 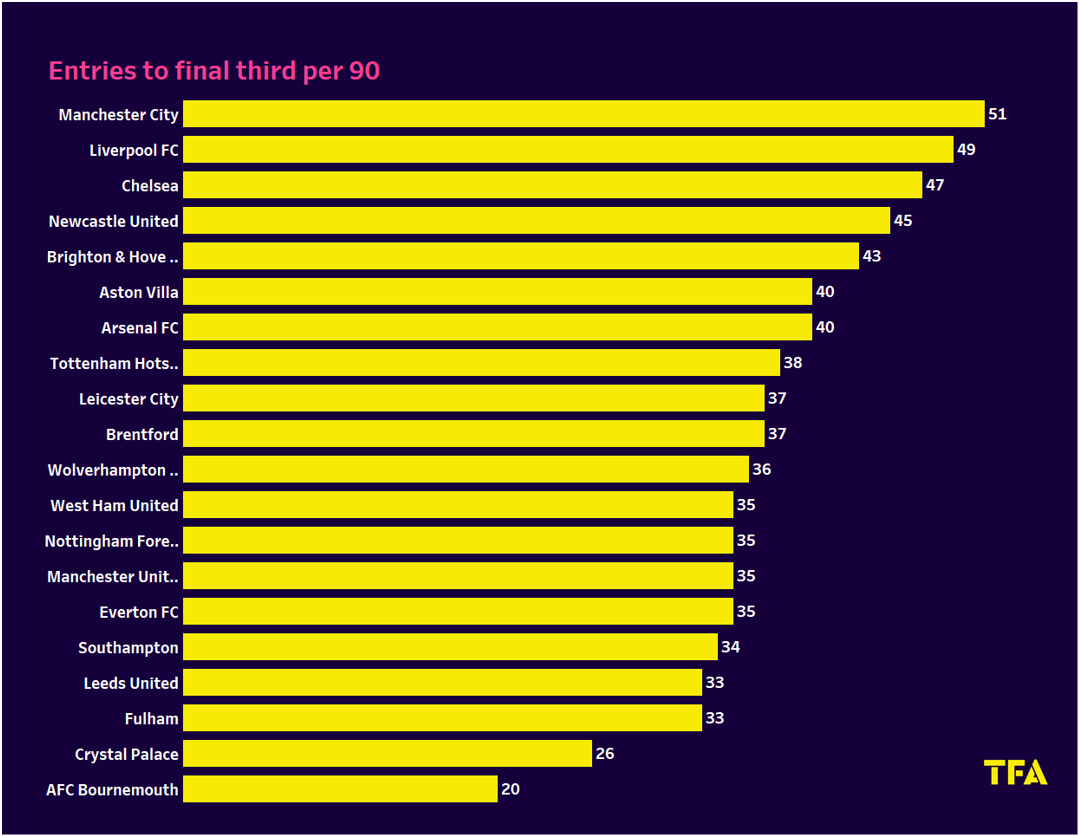 The Cityzens average 36 positional attacks per match and nine shot attempts from these attacks. They have also attempted 17.4 shots per match with an accuracy rate of 40.2%. The above viz shows that Manchester City players make a lot of runs into the final third. This season, they are ranked at the top in this metric. City players will once again try to enter the final third and put continuous pressure on Villa’s defence. 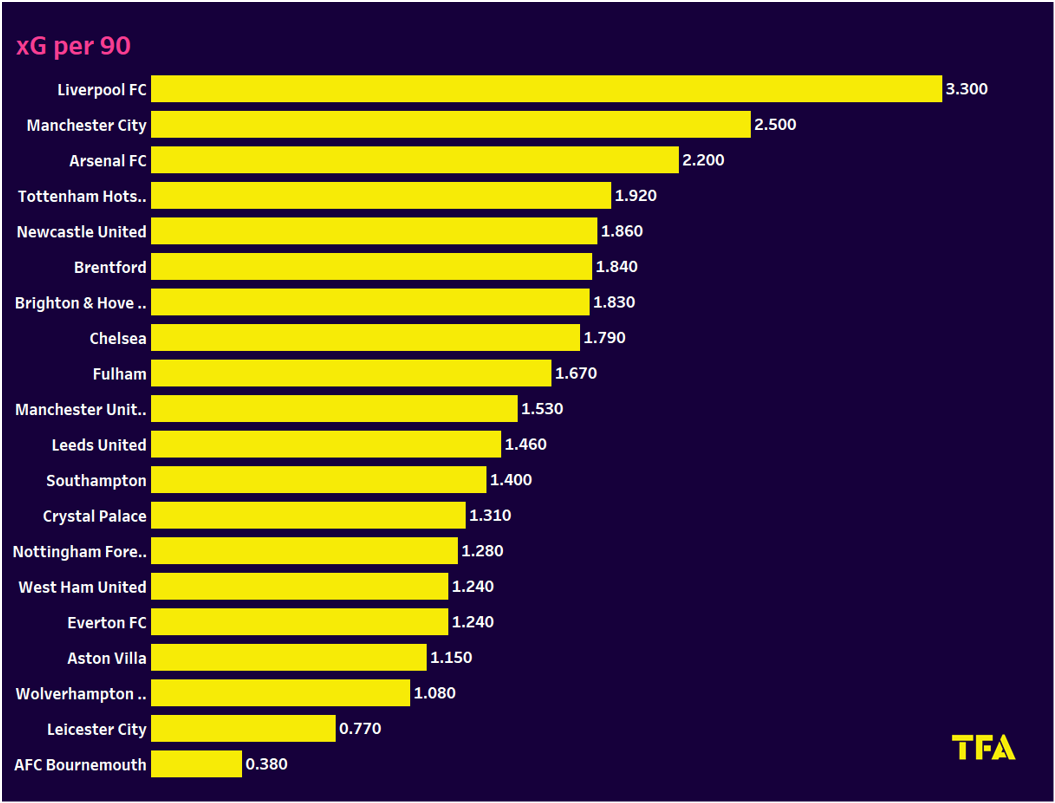 Aston Villa have played decently this season, but they struggle to create threats and score goals. They average 30 positional attacks per match and 10.6 shots per match, with an accuracy rate of 28.3%. The above viz shows that Villa are ranked low for xG per 90 minutes and this is a big concern for Steven Gerrard. Their defence has been decent, and they have won 60% of their defensive and 50% of their aerial duels. Gerrard will look for more efficiency in attack and a goal against this City team could boost his confidence for the next match.

The home team has no new injury concerns with two players in contention to make their debuts. Leander Dendoncker and Jan Bednarek were signed on deadline day, and they might get a few minutes for their new team.

Kevin de Bruyne will return to the starting XI after coming off the bench in the last match. Pep is likely to go with only one change in the team.

Manchester City are the clear favourites to get a win against Aston Villa. Erling Haaland’s addition has brought more fire to the attack, and they are a force to reckon with this season. Aston Villa will also find it hard to break down City’s defence, and they need to take their chances in the match. It is a must-win game for both these teams.

Talking money and loyalty: Why Manchester City star is stalling on...

Statistical Analysis: Manchester City back on top after win over Brighton

Bernardo Silva’s contribution in City’s four consecutive wins – what do...