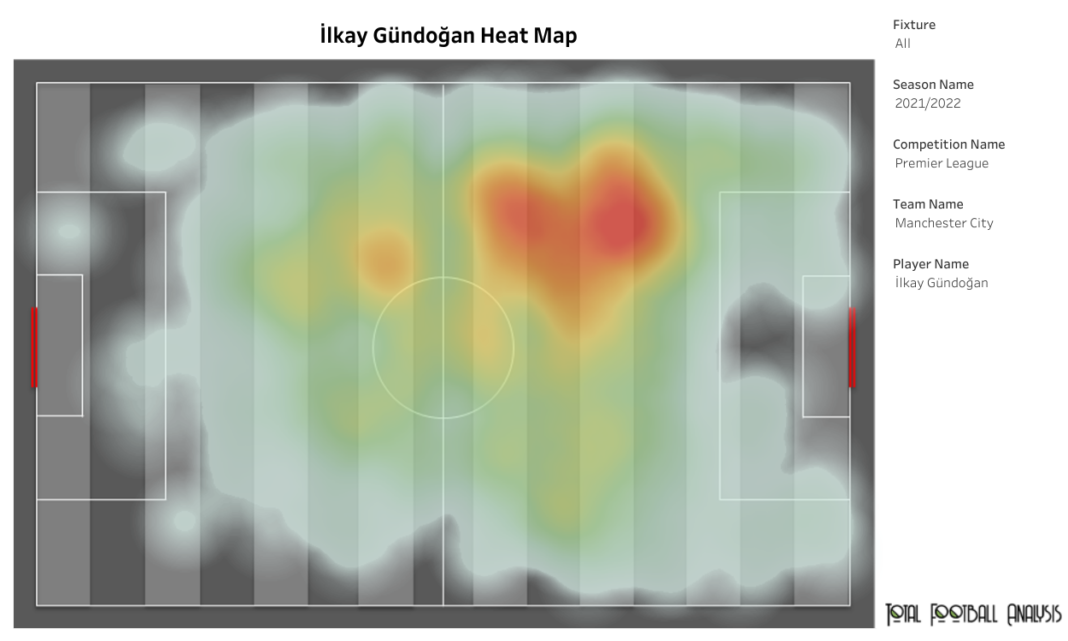 When Manchester City signed İlkay Gündoğan from Borussia Dortmund in the summer of 2016, it was expected that he would add versatility to the midfield, with the ability to play centrally in a deeper role as well as in an advanced position. And he definitely showed his spectacular versatility. In the stacked Manchester City squad, he had some great moments, including the League-winning goals scored as a substitute last season in the final matchday against Aston Villa. However, his contract is expiring in 12 months’ time, which means Manchester City will have to decide whether to renew or cash in on the midfielder this summer. 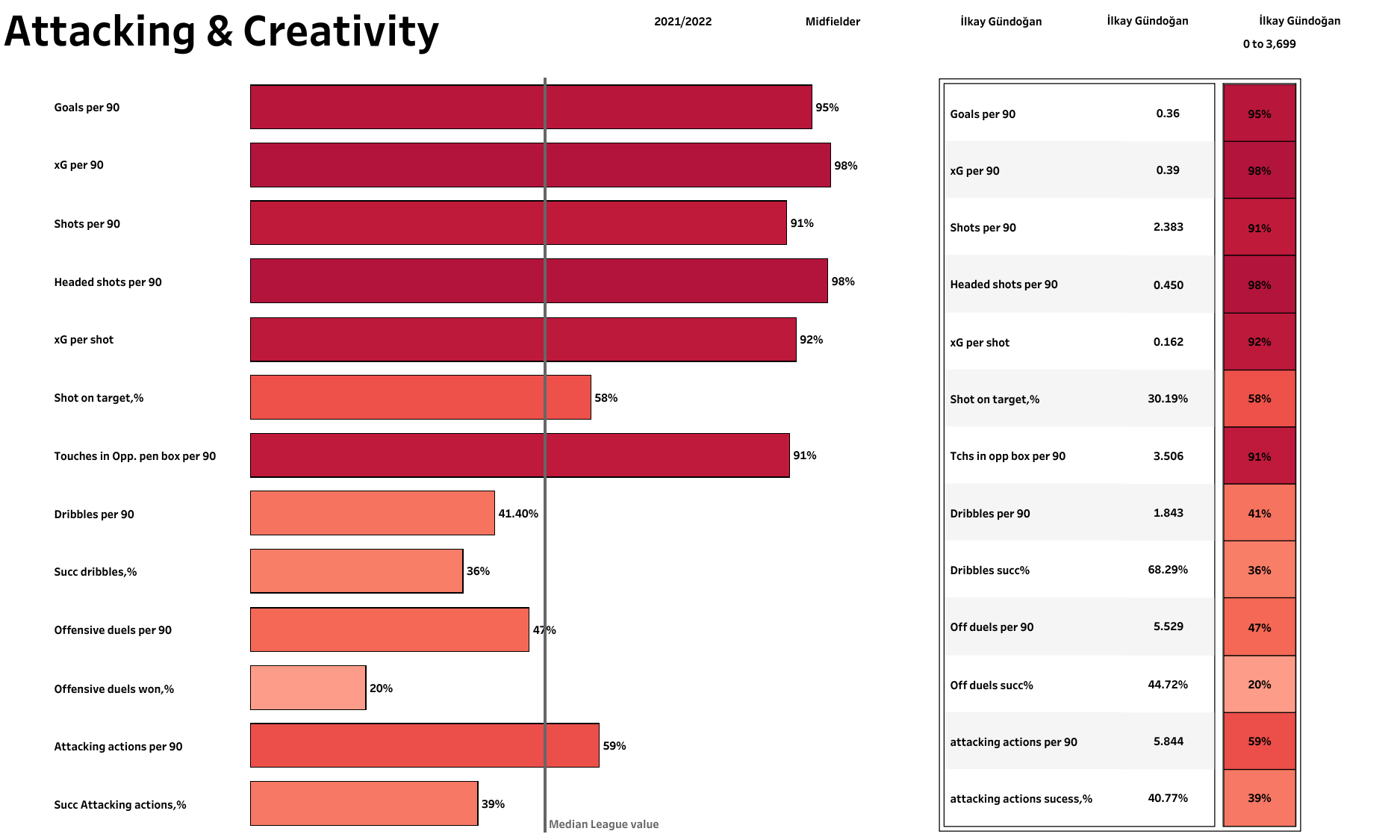 Gündoğan played 43 games in all competitions for Manchester City last season, 27 of which came in the Premier League. He spent 1,854 minutes on the pitch where he scored eight goals at a rate of 0.36 goals per 90 – among the top 5% of midfielders. His 0.39 xG per 90 put him in the upper 2% of midfielders. The German international fired off 2.4 shots per 90 and generated 0.16 xG per shot despite hitting only 30% of his shots on target. He registered over three and a half touches per 90 in the attacking penalty area, good enough for the 91st percentile among midfielders.

Gündoğan had only 0.04 assists per 90 in spite of xA per 90 estimating him to provide 0.16 per 90. As with a Pep Guardiola team, he was a pass master, completing 92% of his attempted passes. He attempted over 55 passes per 90. His ball progression was also good as he found his teammates in the final third 86.6% of the time. The former Borussia Dortmund man provided 1.17 shot assists per 90, comfortably placing him in the upper quintile. He also made 1.93 progressive runs per 90, which was good enough to be ranked near the upper quartile. 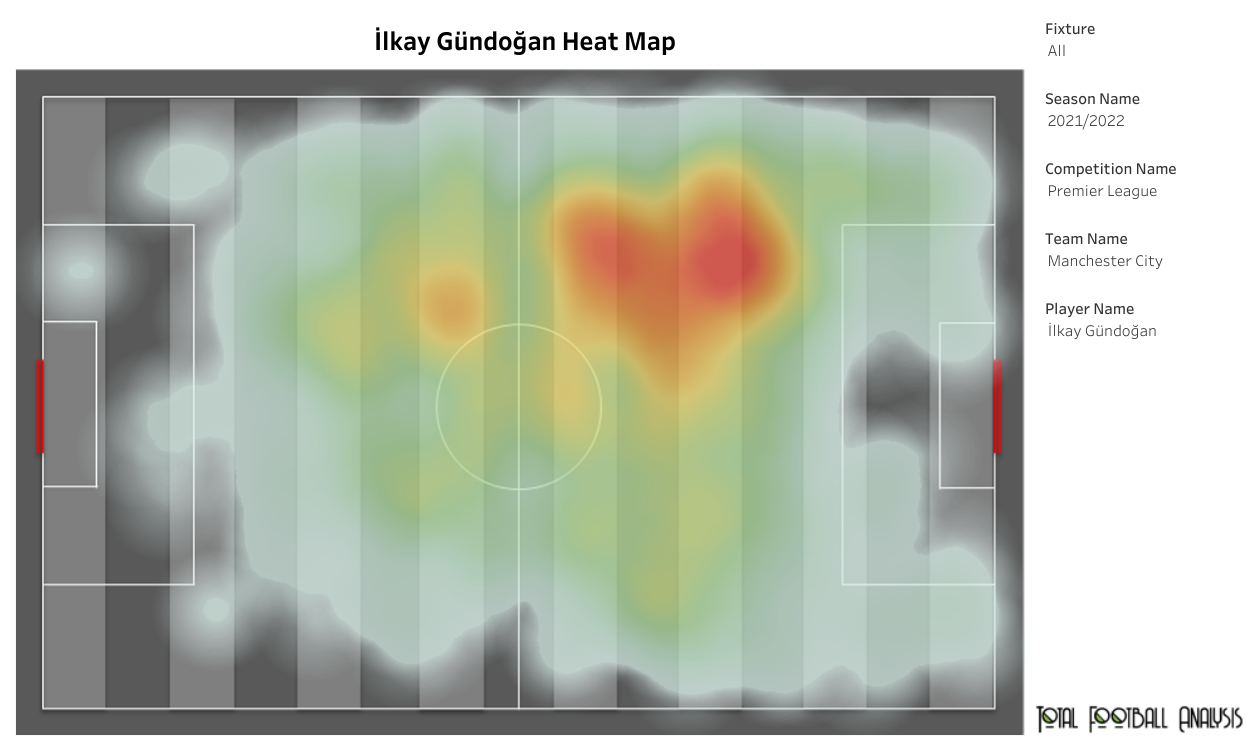 Gündoğan primarily operated on the left-hand side of a midfield three, as seen in the heat map above. He easily linked up with the forwards and created dangerous situations for the opposition teams near the penalty box. He completed 4.08 progressive passes per 90, 3.79 balls into the final third per 90, 1.8 key passes per 90, 1.31 passes into the box per 90, 6.41 progressive carries per 90 and 2.33 carries into the attacking third per 90. 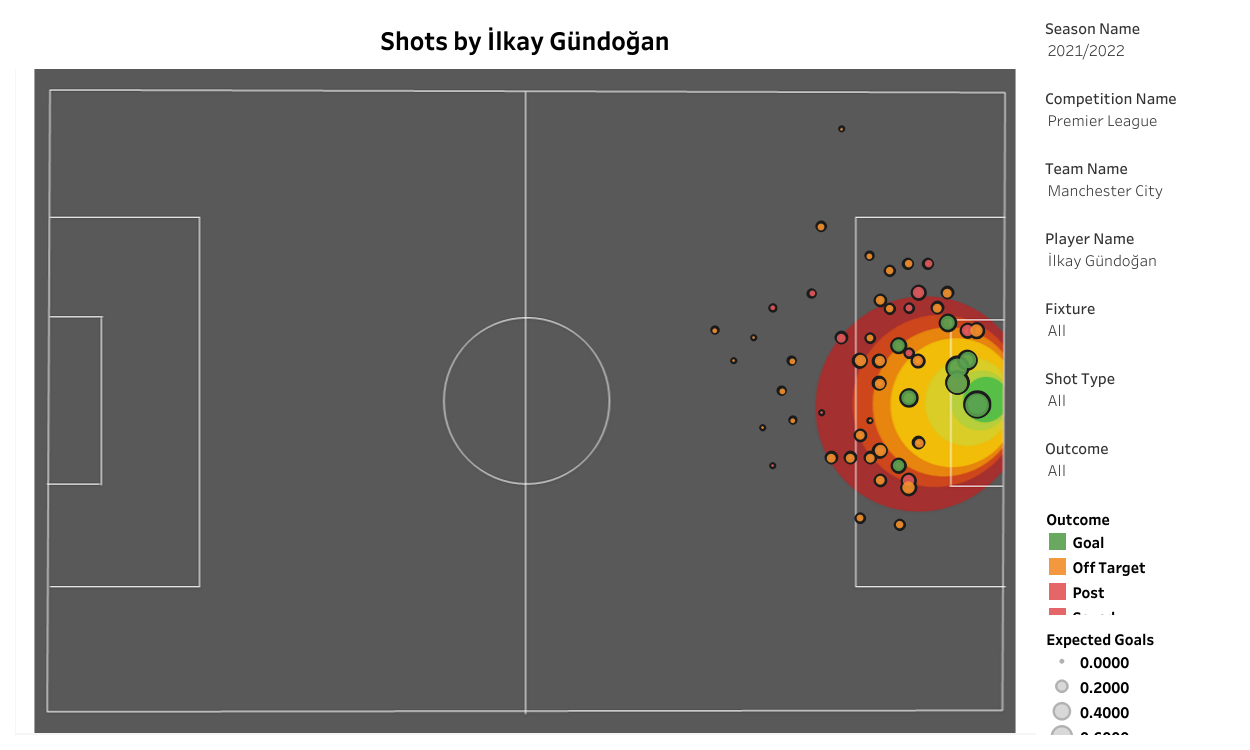 Gündoğan took the vast majority of his shots from inside the box. All of his eight goals came from inside the penalty area and none of them from the penalty spot. He rarely missed any big chances last season. The German international took 55 shots, which meant that he needed 6.87 shots to score one goal.

İlkay Gündoğan netted the crucial title-winning goal last season against Aston Villa in the last match of the season. However, he will turn 32 by the end of the season and a contract extension may do more harm than good for the club. So, Manchester City can either cash in on the experienced midfielder or let him run down his contract next summer.