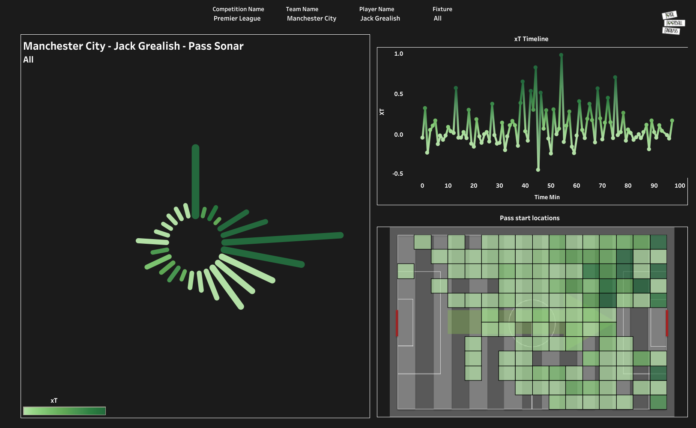 Jack Grealish arrived as a record £100m player, ready to push Manchester City to another level. Grealish, 26, was one of England’s stars at the Euros, becoming a national favorite as it felt the whole country was pleading with Gareth Southgate to put him in the starting line-up. But six months into his City career, Grealish looks to be a player weighed down by the hype and expectation that goes with his price tag.

Despite the disappointing result in Southampton on Saturday, the performance of Jack Grealish was certainly a bright spark which showed us his undoubted potential in a blue shirt. When comparing his current stats to last year, it would be easy to argue that he has dropped off in performance this campaign. Grealish has a tally of two goals and two assists so far for City in 16 appearances in the Premier League. Last year at Aston Villa, he scored six goals and provided 10 assists in the 26 games he featured in. But these stats can create a misleading picture as to how his first few months at the blues have gone. 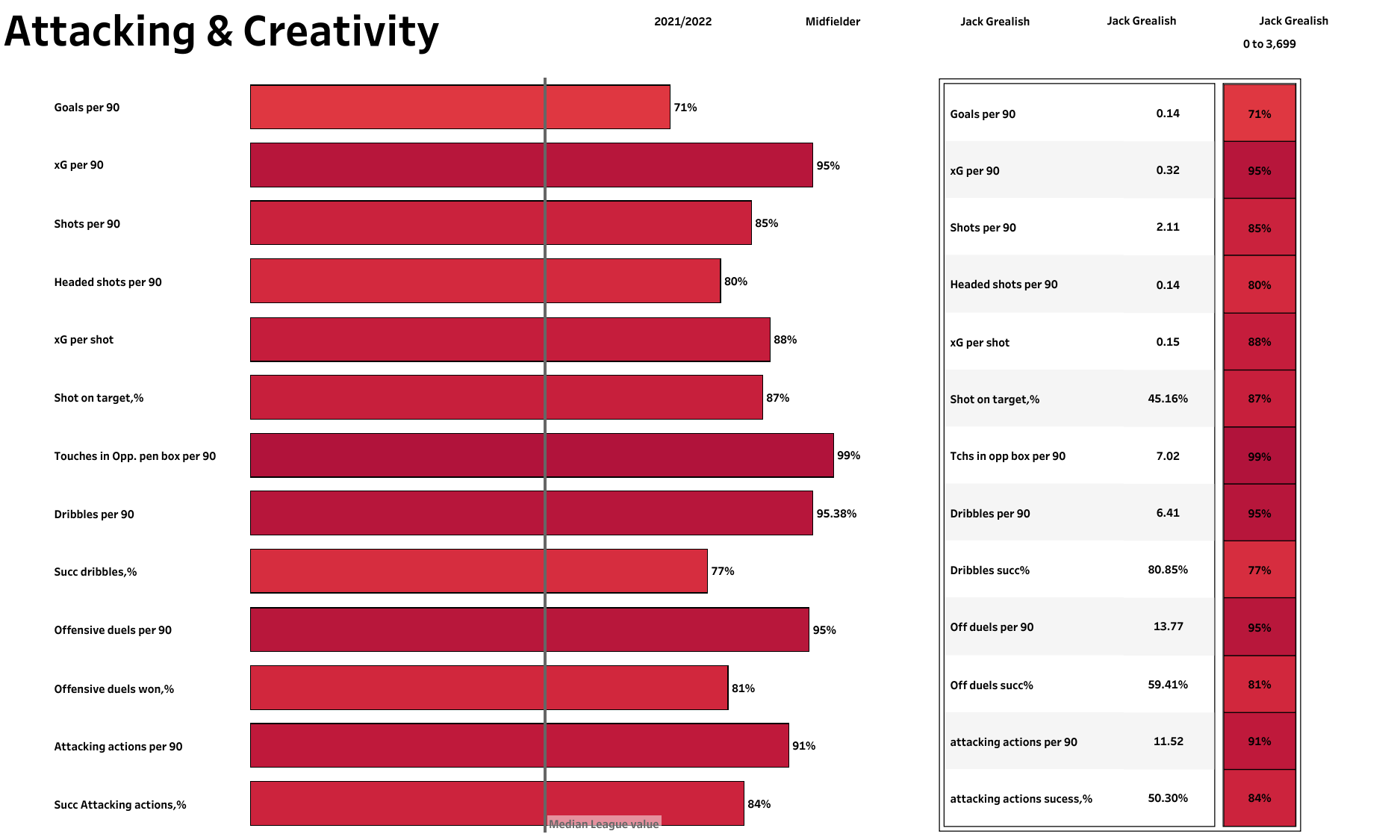 The above visual shows us the attacking stats for Grealish from the 2021-22 Premier League season. The player carries an expected goal rate of 0.32 per 90 minutes and has attempted 2.11 shots on an average with a shot accuracy rate of 45.16%. Grealish has attempted 11.52 attacking actions per 90 minutes and has been able to complete 50% of these actions. Grealish’s movement to create space for his teammates, along with his ability to involve other players in attacks, cannot be understated. Against Southampton, Grealish could be seen using his skill on the ball to beat defenders and create attacking opportunities. He was playing as a false nine against Southampton, and the movement that he has implemented off the ball into his game has fitted into a system where more space needs to be found due to the lack of a striker. 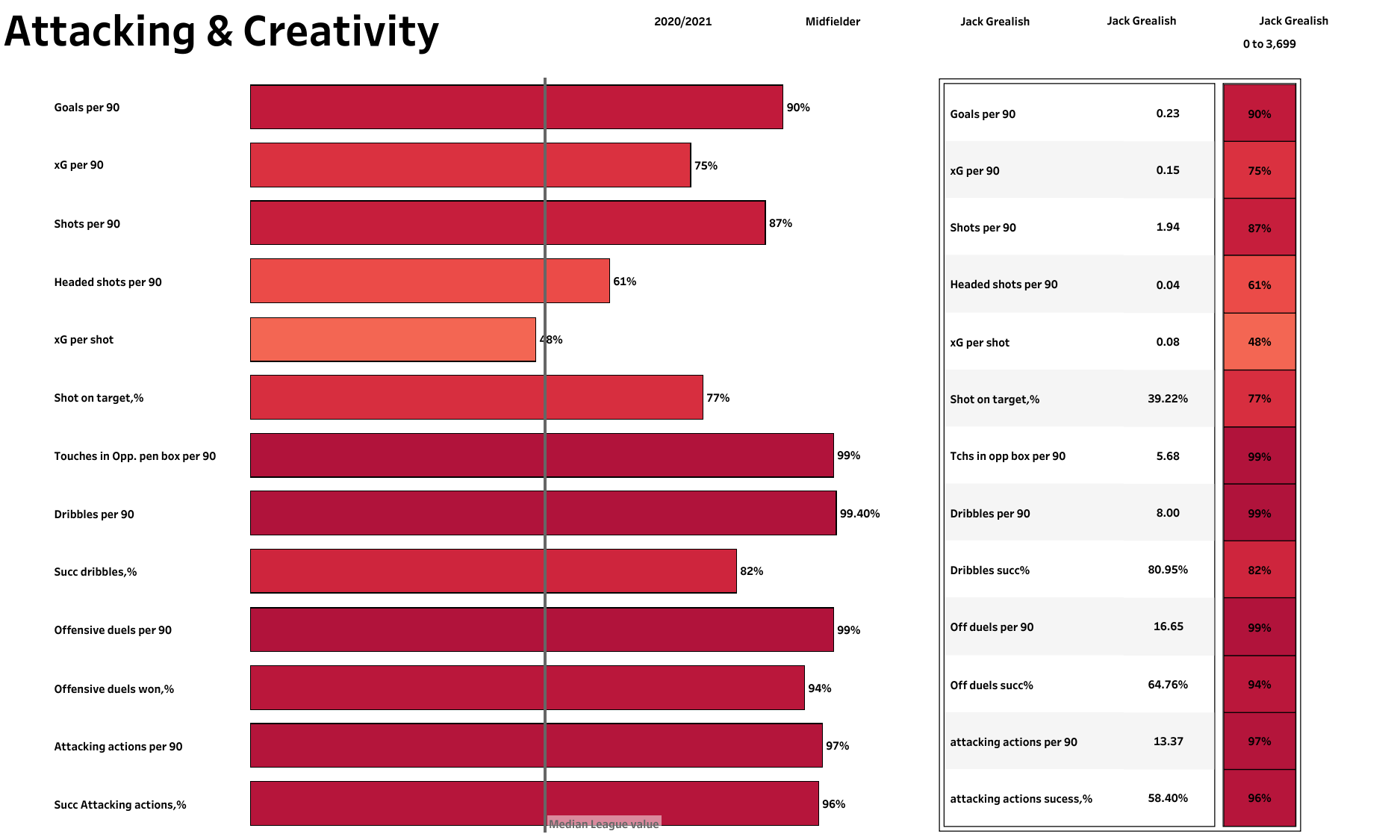 The above stats are from the 20-21 season when he played for Aston Villa. The stats indicate that he had better attacking metrics at Villa and was more efficient in the final third. He attempted more offensive duels and had a better success rate with these duels. At Aston Villa, he often would have had far more space to run into and attack the opposition defenders. Not only this, but at Villa, the team relied on him to be the focal point of their attack, but at City, Grealish must share the ball more widely with his teammates. Grealish thrives when he is given the freedom to move into whatever position he is most likely to find space and receive the ball. But at City, he cannot do so because Guardiola has a different plan for him and wants him to adapt to that plan. Adapting his style to play in this new situation is difficult and often leads to fewer goals. This, however, does not mean that he isn’t impacting games like he used to, instead he is helping out City in a different way by passing around the ball more. 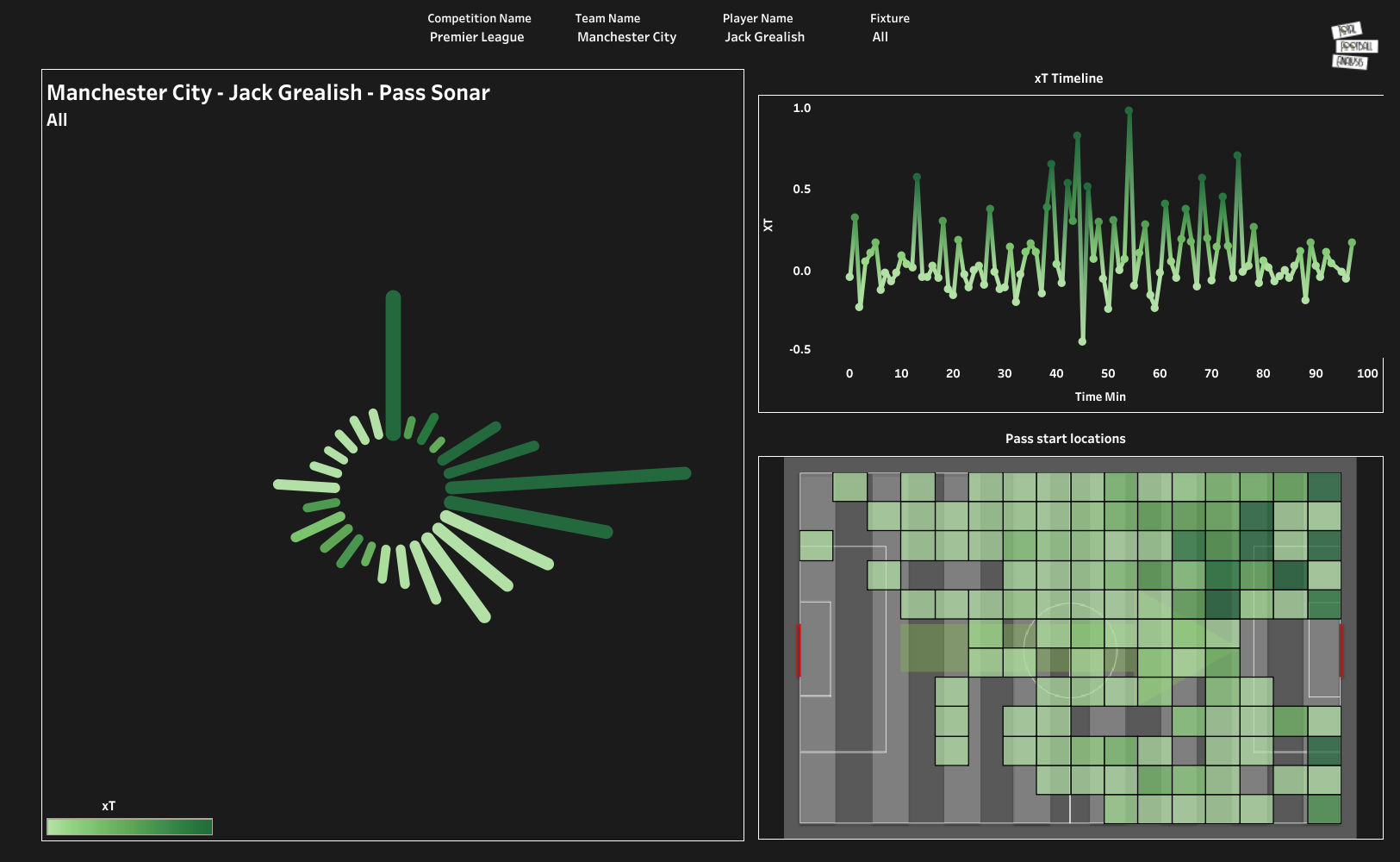 Grealish has largely been involved in Man City’s build-up towards the goal as he has played a wide range of passes. His pass sonar indicates most of his passes have been from the left wing, and he has also put in several crosses into the penalty area, with these crosses generating a high xT. His pass start location indicates how much of a threat he is on the left flank with the number of xT creation zones he has on that side of the pitch. The xT timeline indicates that Grealish is a huge threat to the opposition defense throughout the game and can use his skill to get into great positions to find a teammate in the final third. Even though Grealish has only recorded two assists so far, he has several pre-assists to his name, which indicates that he is involved in many goals for City. 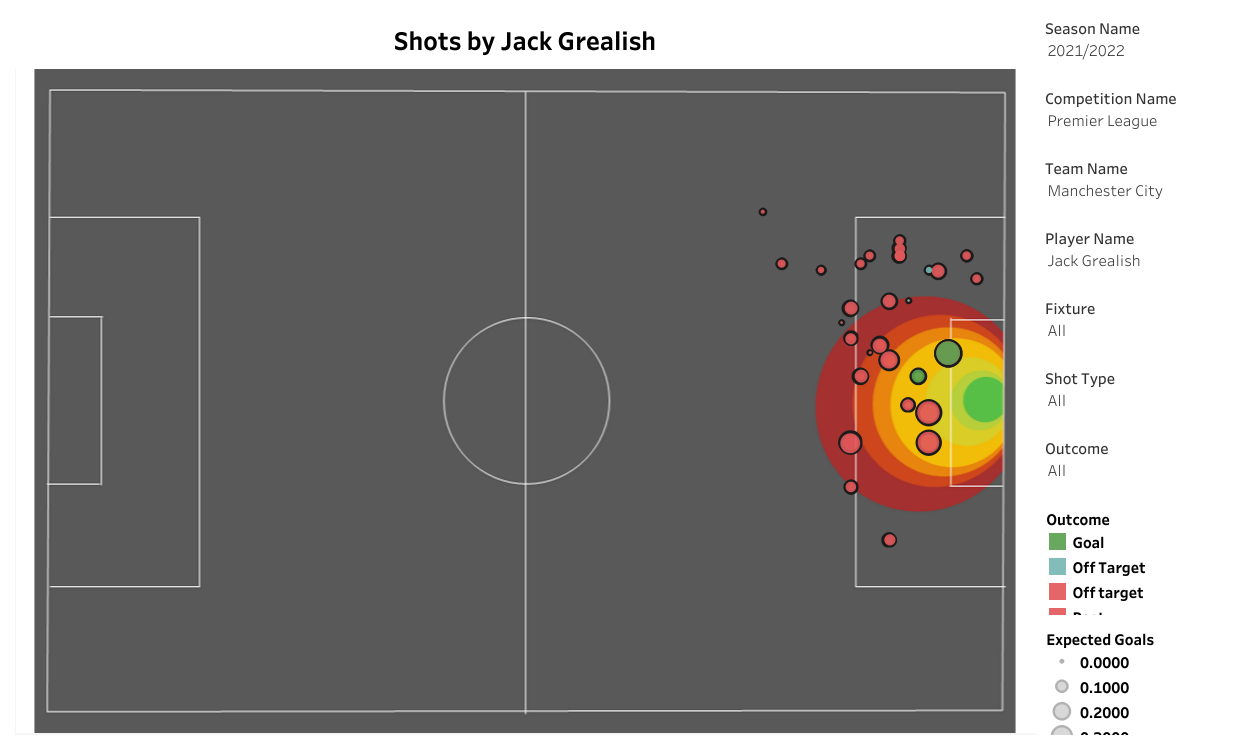 He is one of the best dribblers in the Premier League, and he has a low centre of gravity and technique which means he is perfectly balanced as he moves the ball with his right foot and is, therefore, able to move away from his marker. This enables him to create a yard’s space to take a crack at the goal. As seen from the above visual, he has attempted several shots from the left flank.

Grealish’s situation is similar to that of Riyad Mahrez. After joining from Leicester, Mahrez didn’t seem to be the same player that City signed. Pep’s style of play is very complex and demanding on the players, so it is only expected that it can take a while to get up to speed with his playing style. With age still on the side of the 26-year-old, Grealish still has a long way to go. Grealish has made a bright start to his City career despite having the weight of the £100m-price tag on his shoulders.