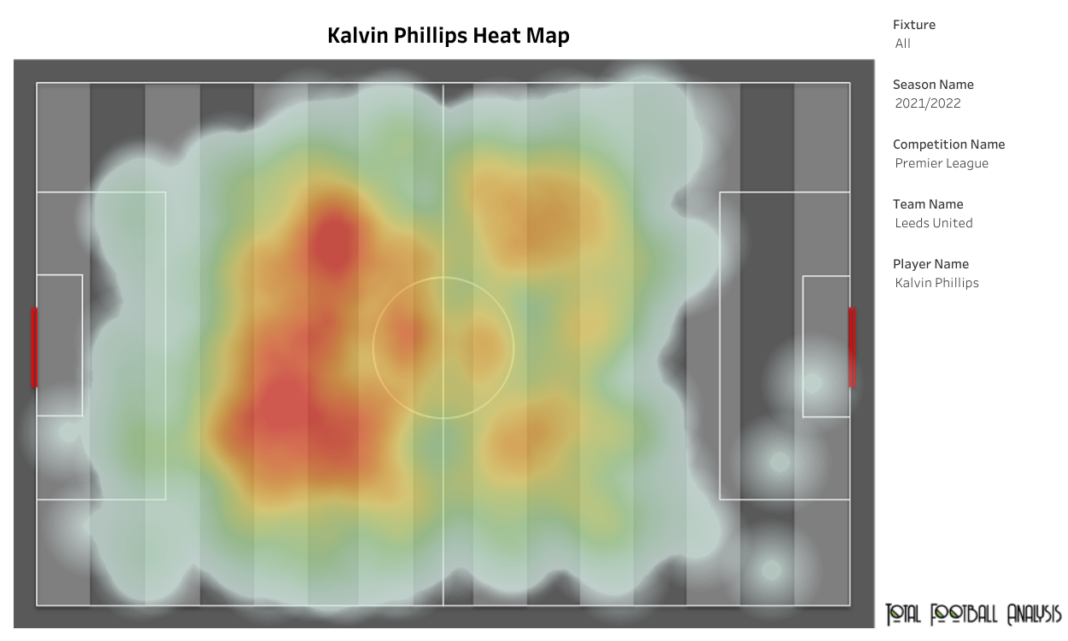 Manchester City thrillingly won the Premier League title on the final matchday of the season. But at the other end of the table, Leeds United barely escaped relegation. Last season (2020-21), the Whites finished in the top half of the table. One of their key men was Kalvin Phillips, the defensive midfielder. This season due to a hamstring injury, the 26-year-old midfielder missed four months, and Leeds nearly paid the price. His previous season’s heroics seem to have convinced many clubs who are pursuing the midfielder, including Manchester City. In this article, we will dissect Phillips’ performances and see if he would be a good option to add in the Manchester City midfield. 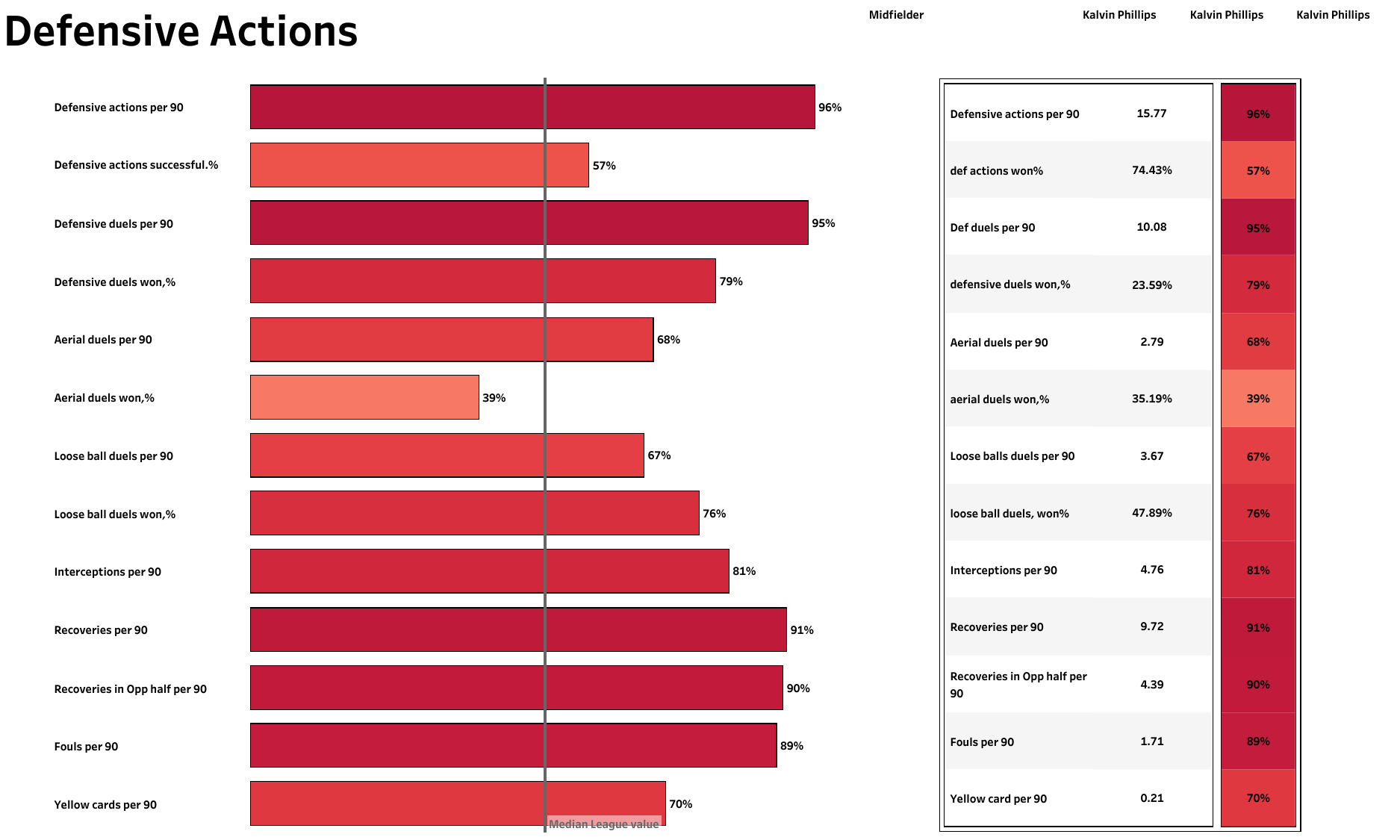 Phillips played only 20 games this season for Leeds United due to the aforementioned hamstring injury. But whenever he was on the pitch, he played well. The defensive midfielder attempted 15.77 defensive actions per 90 with a success rate of 74.43%. Phillips attempted 10 defensive duels per 90, putting him in the top 5% for this category. The 2020-21 England Player of the Year also attempted 3.67 loose ball duels per 90 and won nearly 48% of them. One area he needs to improve on is his fouls making. He committed 1.71 fouls per 90, which was in the top 11%. 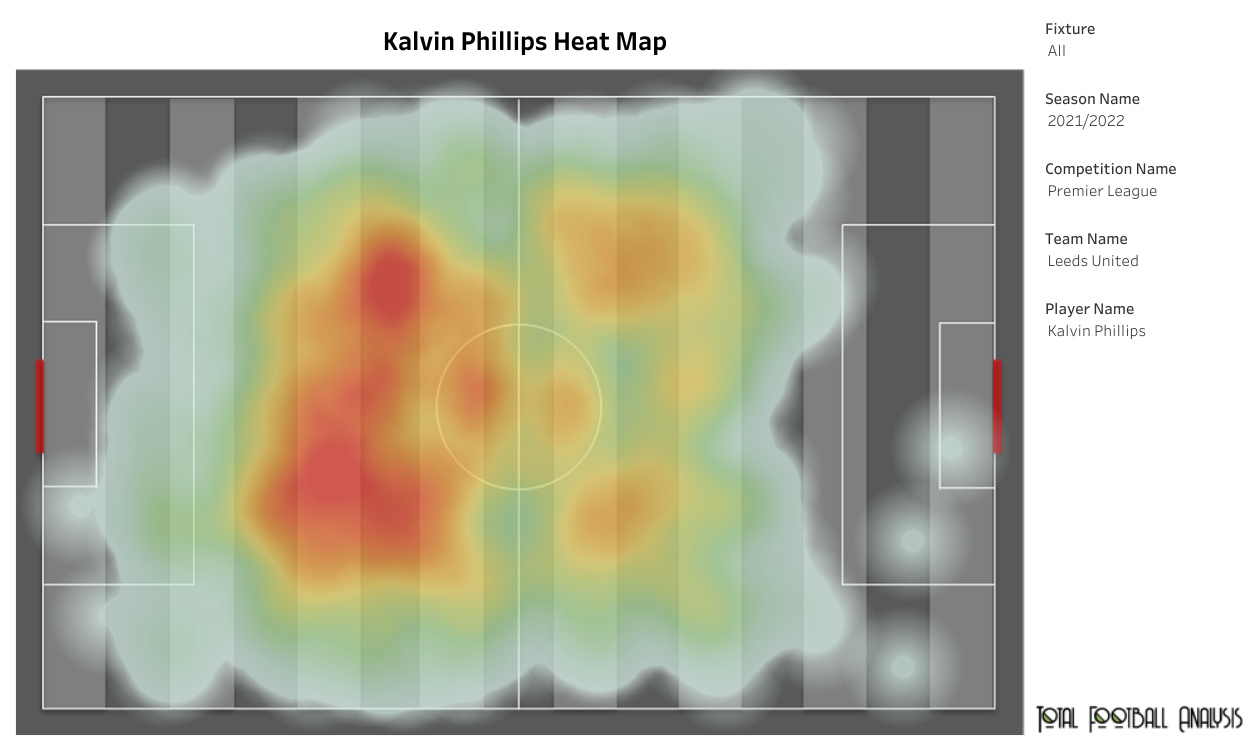 Shown above is the heat map of Kalvin Phillips for Leeds United in the Premier League season gone by. Defensively, the Englishman attempted 28.5 pressures per 90 (8.42 of which were successful), 5.59 tackles and interceptions per 90, 2.37 blocks per 90 and 1.69 clearances per 90. Except in clearances, Phillips bettered his performances from last season in every other defensive stat. The only difference was the cumulative numbers, which were affected entirely due to the major injury he suffered. 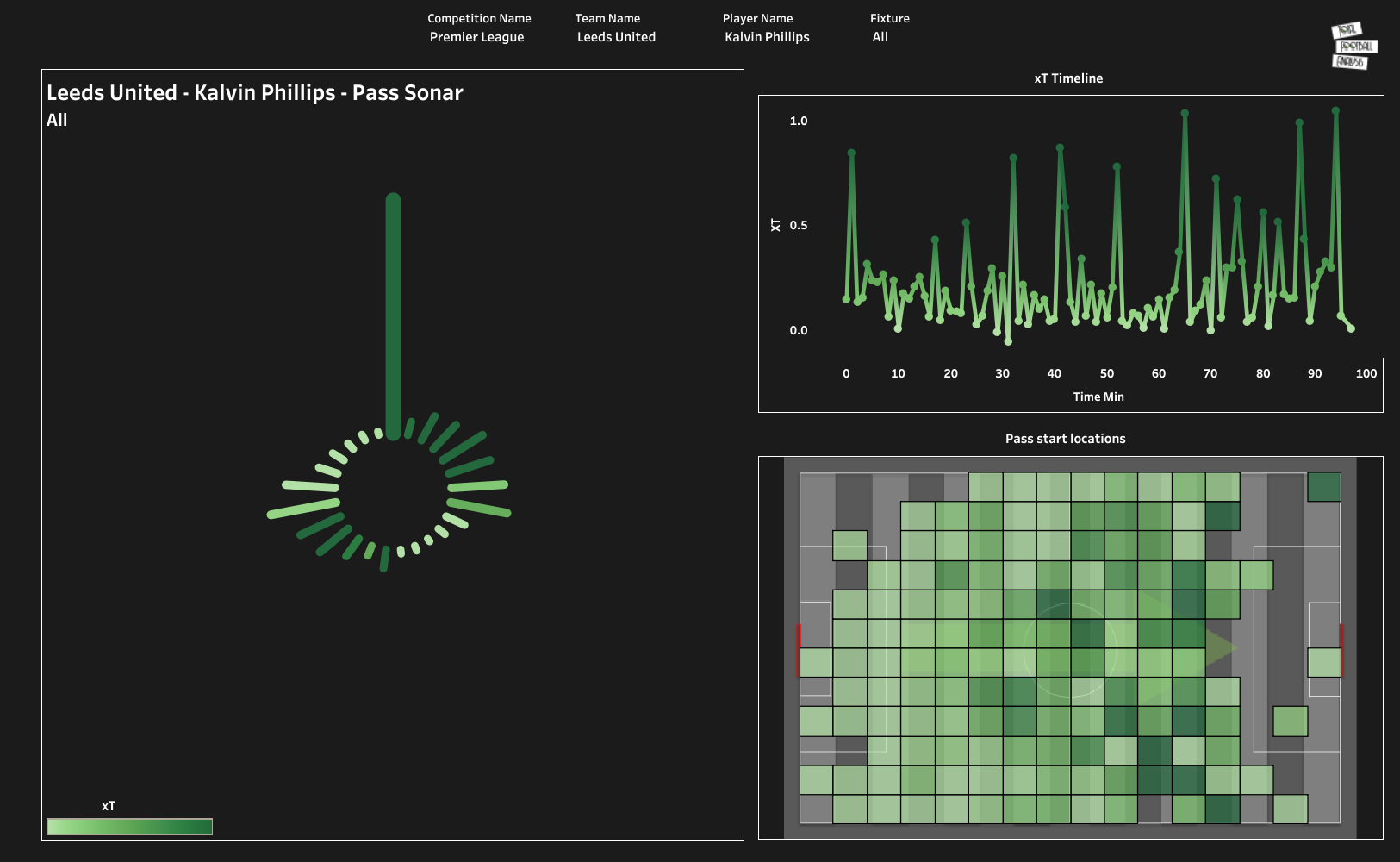 Seen in the above visual are the pass sonar, xT timeline and xT map of Phillips for Leeds United in the 2021-22 Premier League. The Englishman regularly produced an xT score of 0.5 or higher. Phillips completed 4.12 progressive passes per 90 and 4.41 passes into the final third per 90. On the ball, he also completed 1.53 progressive carries per 90. Most of the threat he generated came from the progressive passes and balls into the attacking third.

Kalvin Phillips was sorely missed for four months by Leeds United as in his absence, the Whites lost 10 games, which nearly cost them the Premier League status. Having escaped relegation, Leeds have put a higher price tag on Kalvin Philips for potential suitors, including Manchester City. However, if he signs for the Cityzens, he could provide competition to the existing midfielders at Manchester City.