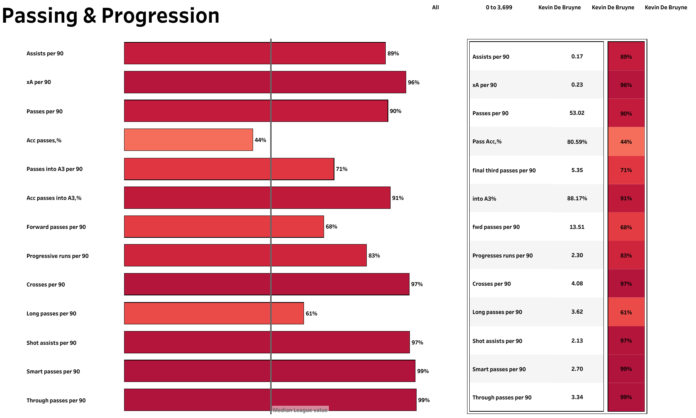 With a comfortable 4-1 win against local rivals Manchester United, Manchester City ensured they did not lose any ground to Liverpool in the title chase. Just under five minutes into the game, Kevin De Bruyne scored his 50th Premier League goal after calmly connecting on to Bernardo Silva’s inviting pass. The Belgian found himself in enough space inside United’s penalty box to slot his shot between Harry Maguire’s legs and past David de Gea. United equalized in the 22nd minute thanks to a superb Jadon Sancho curler that hit the post and went in. For only five minutes, the sides were level before De Bruyne netted his second to restore City’s lead. City’s third goal came from Riyad Mahrez midway through the second half, as City asserted their control over their biggest opponents. In second-half stoppage time, he added a brace to guarantee the result was beyond their neighbor’s reach.

Kevin de Bruyne gave a majestic performance and was the standout player as Manchester City thrashed Manchester United 4-1 during Sunday’s derby at the Etihad Stadium. The Belgium international yet again delivered when it mattered most for his side to continue his run of bagging goals in the biggest games. 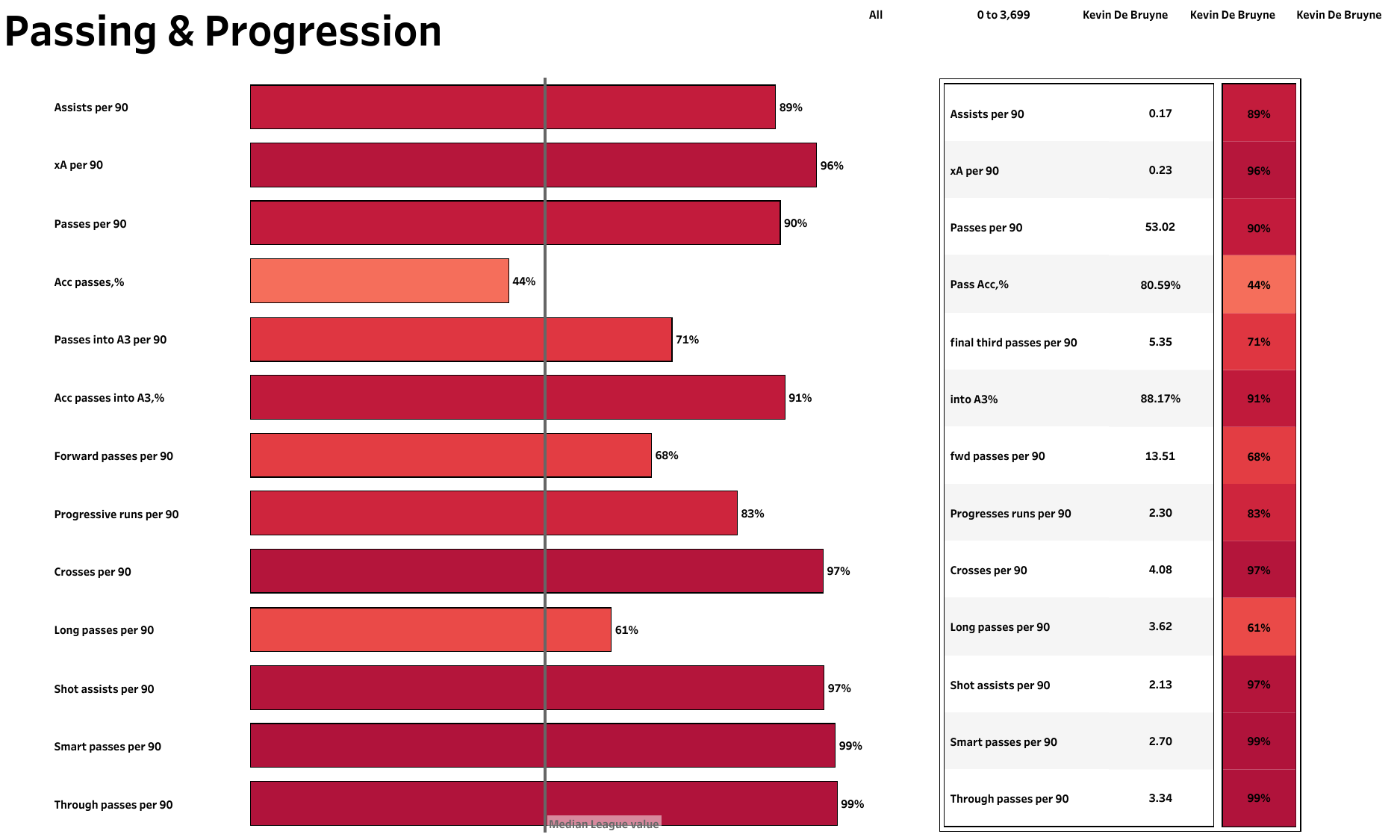 The above visual shows us the passing and progression stats for Kevin De Bruyne from the 21-22 Premier League season. His passing metrics in the league indicate that his stats are significantly higher than the league median value. KDB has an expected assist rate of 0.23 per 90 minutes. He has played 53.02 passes on an average in each match and has a high pass accuracy rate of 80.59%. Most of KDB’s passes are in the final third, and he has completed 80.17% of these passes. KDB ranks highly for the number of smart and through passes he has played per 90 minutes. 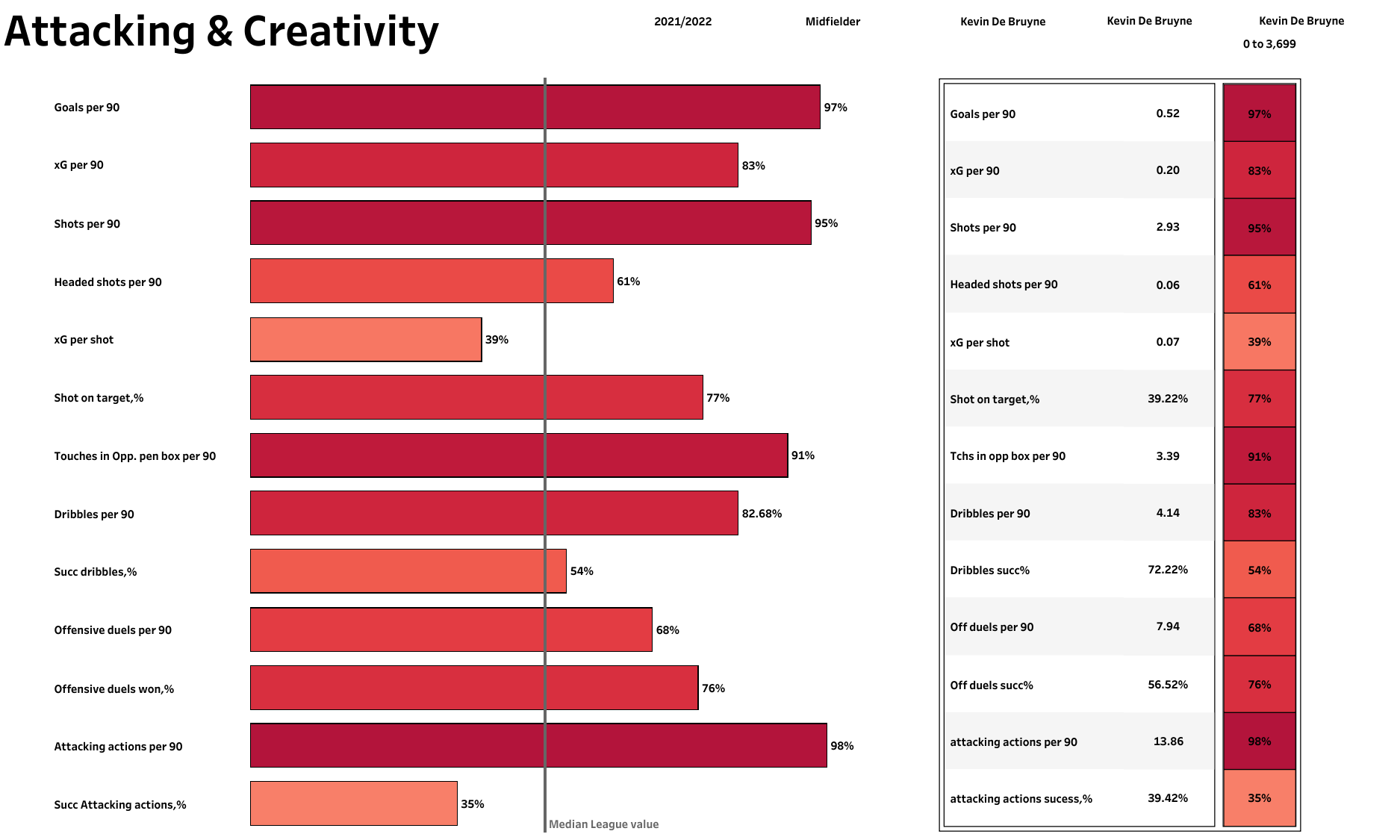 The current formation that Pep Guardiola has mastered, wherein Joao Cancelo comes in as a second midfielder alongside Rodri, helps Kevin De Bruyne push higher up the pitch and be more involved in the final third. KDB was inside the penalty area for most of City’s crosses, and since they don’t have a proper number nine, this has benefitted them. De Bruyne has attempted 13.86 attacking actions per 90 minutes and has completed 40% of these actions. He also has 40% of his shots on target. 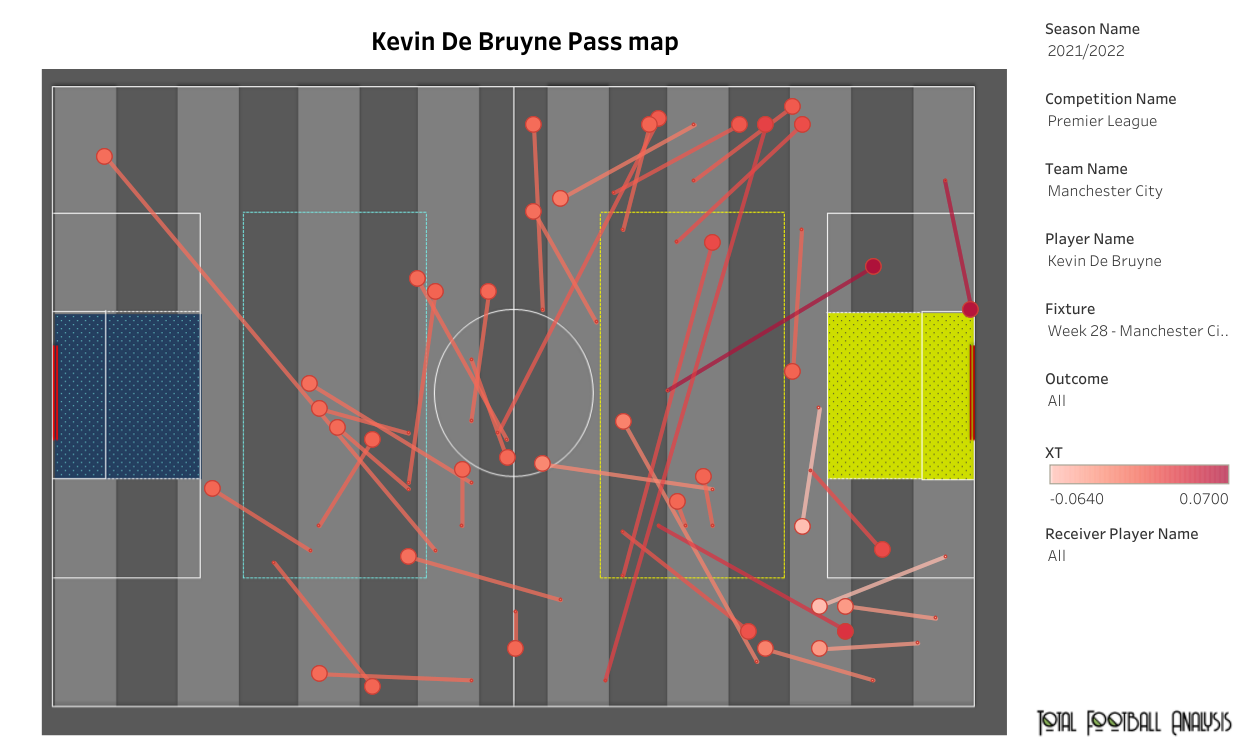 The Belgian midfielder was a constant threat throughout the game, and his smart positioning allowed him to score two goals in the first half. He also provided an assist for Mahrez’s goal in the 68th minute as the Algerian winger scored a left-footed half volley from the edge of the box. The above viz shows us the passes that De Bruyne played in the game against Manchester United. He completed 41 passes with a pass accuracy rate of 87.8%. He generated a very high xT from the passes he played into the final third and also provided the final ball for the second goal. De Bruyne also attempted six shots on goal and had four of these on target.

De Bruyne enjoyed a free role on the pitch against Manchester United, and that is the position where he has always excelled in. Manchester City are at a very crucial stage in the Premier League race right now, and their best player needs to be in top form and help them get through the remaining games.

Guardiola says that Man City fans are his football family

The Manchester City Problem: Things that have affected the club’s title...

Should City Prioritise The Champions League This Season?