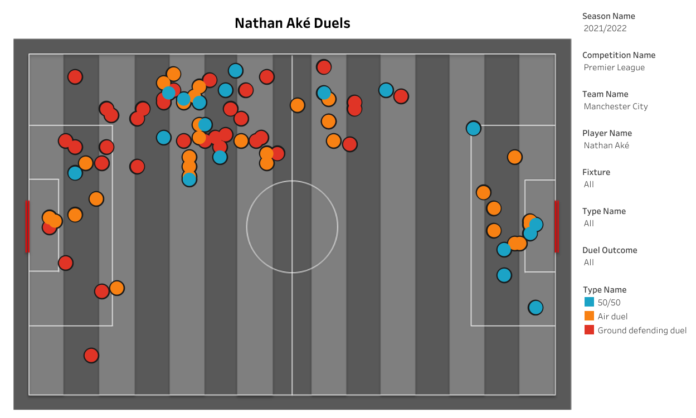 Manchester City have one of the best back lines in the Premier League, with the likes of Kyle Walker, Ruben Diaz, Aymeric Laporte, and Joao Cancelo being almost impossible to breach at times. The Skyblues have conceded a mere 13 goals in their 21 league fixtures, which speaks volumes about their defense.

There are rumors that Spanish heavyweights Barcelona are interested in signing their centre-back, Aymeric Laporte. Barcelona recently completed the signing of versatile attacker Ferran Torres, signing him in a big-money deal, and are now considering a move for Laporte to strengthen their central-defensive options.

Laporte, who joined City from Athletic Bilbao in 2018, was heavily linked with an exit from the Etihad Stadium during the summer, with his opportunities significantly decreasing. However, he has forced his way back into Pep Guardiola’s plans in recent weeks and has established a strong partnership with Ruben Dias in the heart of the defense.

Having established himself as a key individual in recent weeks, City will be reluctant to lose the Spain international, despite John Stones and Nathan Ake offering alternative options at centre-back. But in the event of Barcelona lodging a concrete offer for Laporte, City will want to think of all possible situations and analyze which player will be best suitable to play as their second centre-back with Ruben Dias.

John Stones’ career at Manchester City has been full of ups and downs. After a massive move from Everton with his £47.5 million price tag, he never quite established himself as one of the world’s best.

During the 2017-18 Centurion season, Stones was excellent and featured regularly during the first half of City’s 2018-19 domestic treble-winning year. Things went bad when he became injured and then dropped for captain Vincent Kompany during City’s famous 14-game winning streak to win the title in the Belgian’s final year at the club.

From that point, an injury-riddled 2019-20 campaign, which saw City’s defense crumble after losing Aymeric Laporte to a knee injury. Stones featured only sparingly for the rest of that season, leading to a summer of intense transfer speculation. But this season, Stones has impressed whenever he has played for City. He has featured in six games for the Cityzens, keeping four clean sheets and also scoring one goal. 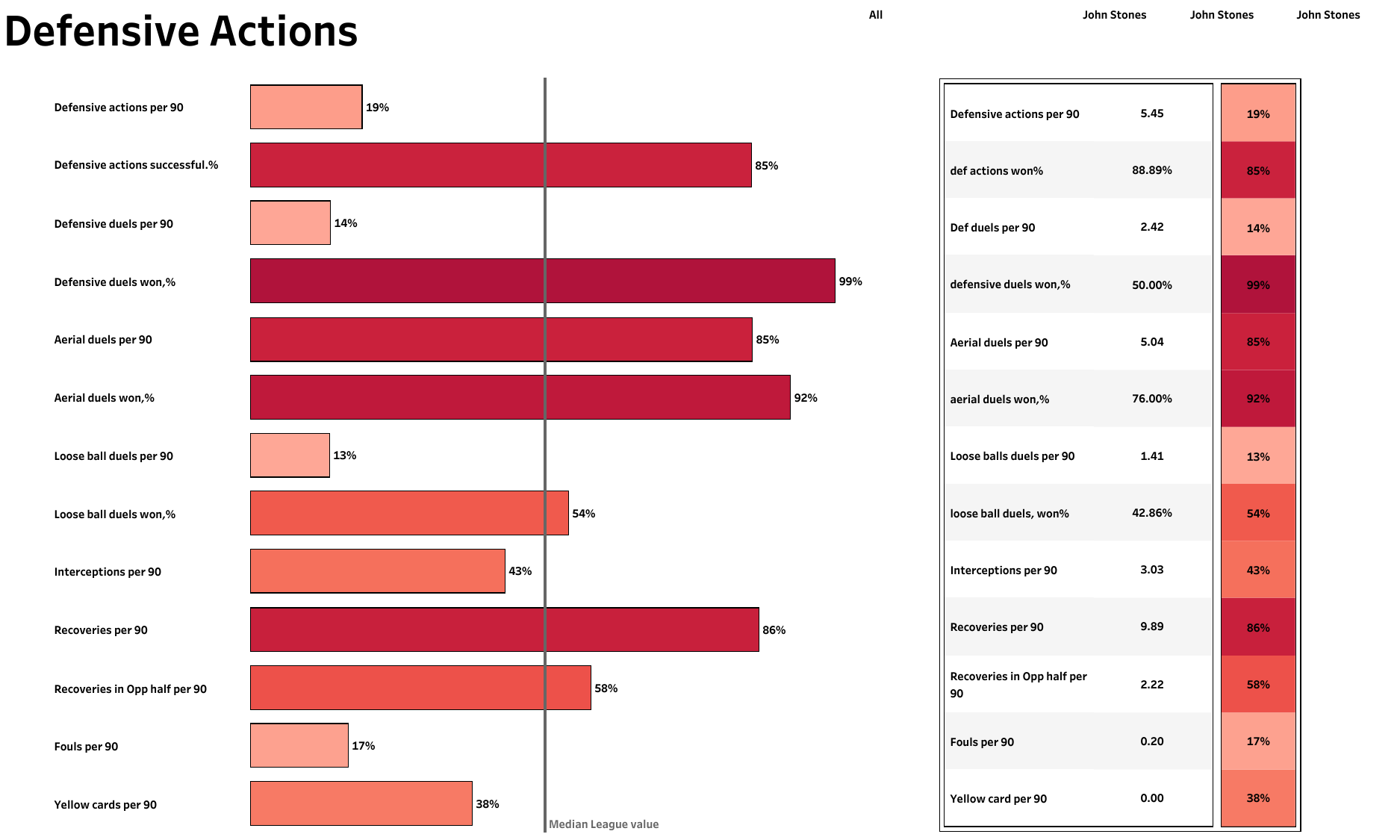 John Stones has not featured in many games for City this season, and the games that he was a part of were mostly comfortable wins. He did not get to face many attacks from the opposition, which is why he has a low number of defensive actions per 90 minutes. The important stat here is that he has been able to win almost 90% of the defensive actions he has attempted. 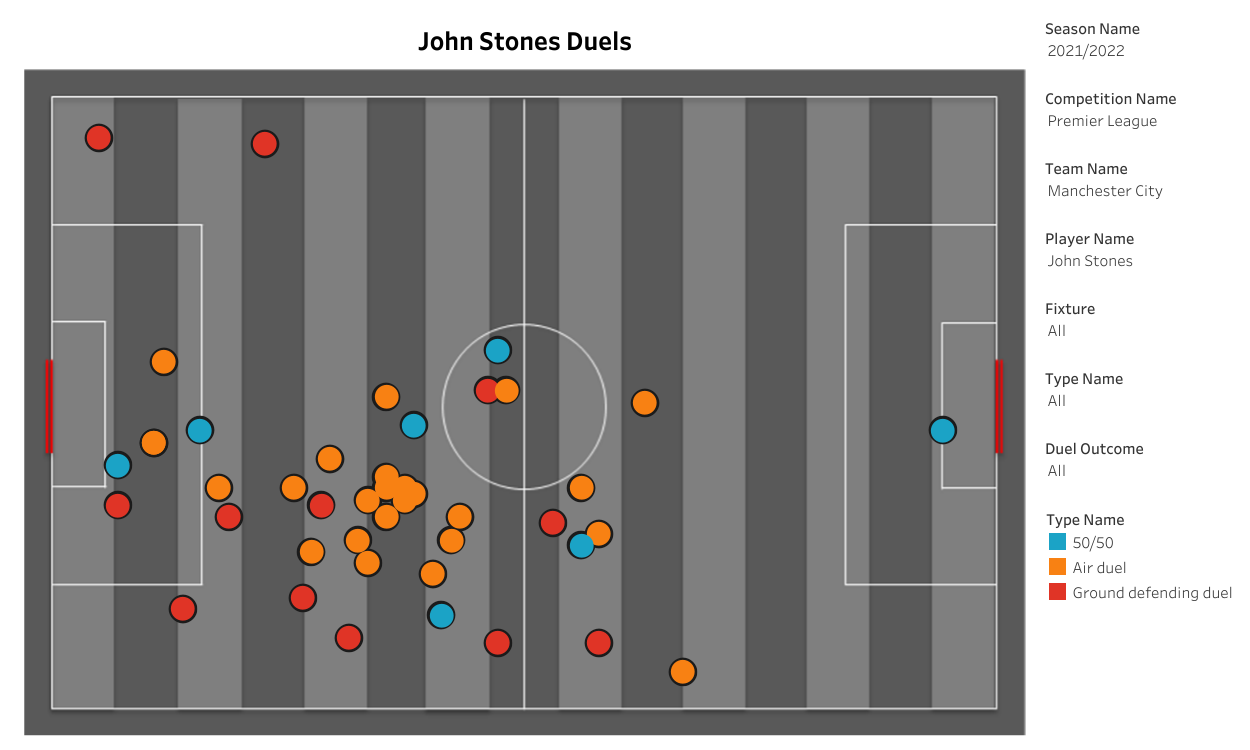 He has a high winning percentage in defensive as well as aerial duels. As seen in the above visual, Stones has won most of his aerial duels a bit higher up the pitch as City try and push their opponents behind.

At £40 million, Nathan Aké seems a great value signing for Manchester City and looks poised to play a major role during his first season at the club. Given the team’s defensive issues a year ago, as things stand today, the Dutchman is City’s second-best option in central defense after Aymeric Laporte.

Despite West Ham United’s interest in City centre-back Nathan Ake, Guardiola has made his intentions clear by denying any interest from the fellow English club. Ake, 26, hasn’t hit the ground up and running this year with just eight appearances in the Premier League. He has helped his team keep three clean sheets in those eight games and has also scored a goal. The Dutchman has been unable to get ahead of players like Ruben Diaz, John Stones, and Aymeric Laporte to feature in Pep’s defensive line consistently. 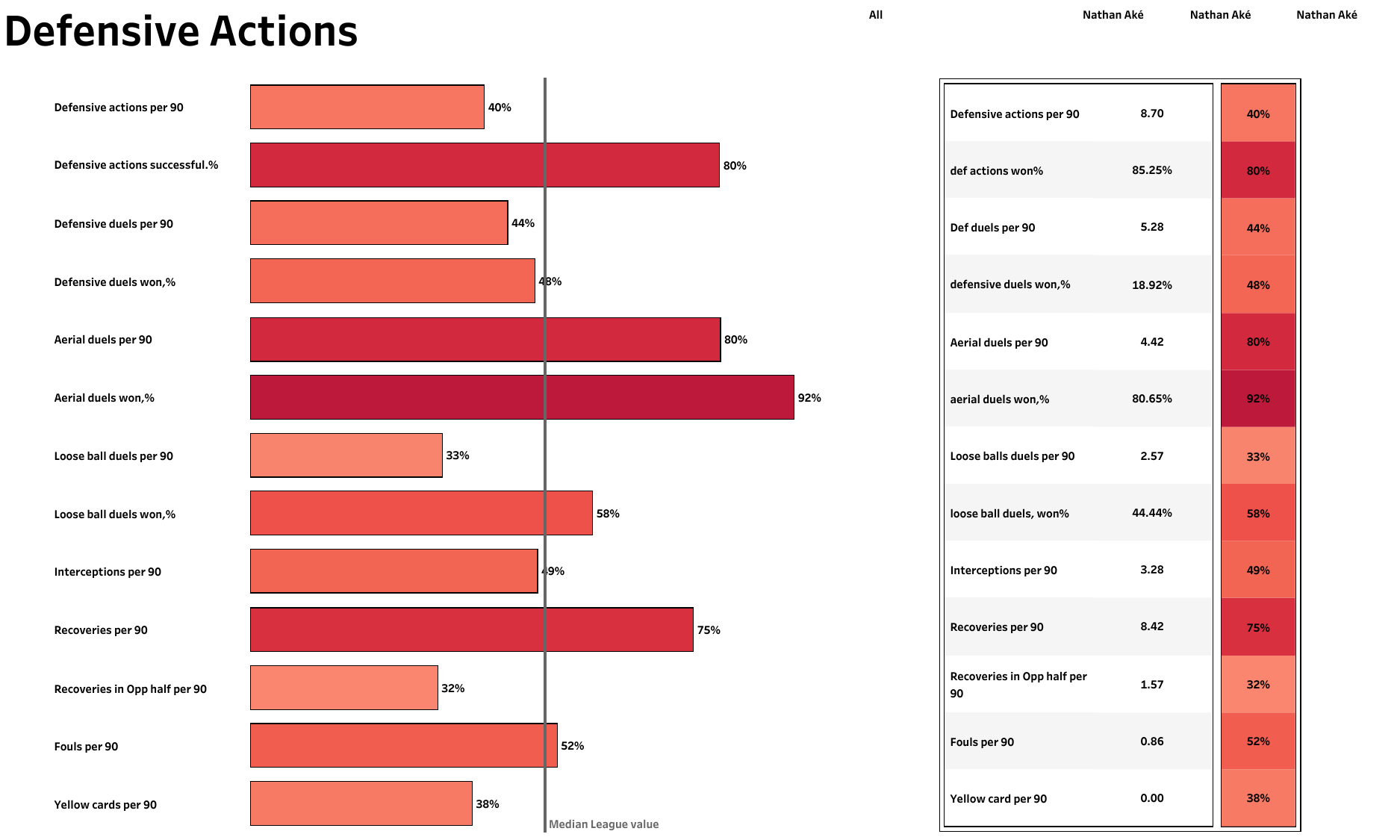 Nathan Ake has impressed in the games that he has played for City since he arrived from Bournemouth. He has attempted 8.70 defensive actions per 90 minutes and has won 85.25% of these defensive actions. He is very strong in the air and has won 80% of the aerial duels he has attempted. Ake has committed only 0.86 fouls per 90 minutes, which indicates that he does not give away silly fouls and that is something a manager will want in his centre-back. 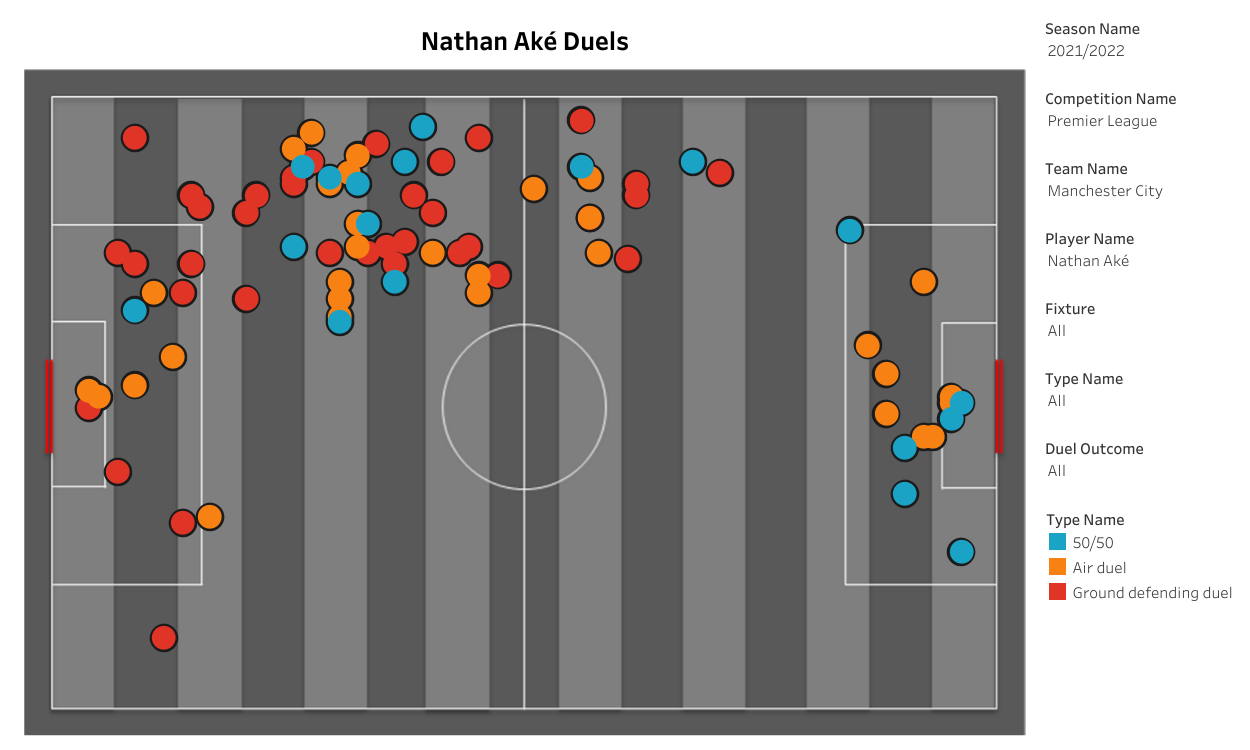 The former Bournemouth man who arrived at the Etihad in 2020 is a versatile player who can switch positions in the defensive third with ease. He has played as centre-back as well as a left back for Guardiola whenever needed. He has won most of the duels he has attempted in both positions. He is also a huge threat in the opposition’s box and can prove to be a big menace in the opposition’s penalty area. Ake is a left-footed player and can be the perfect partner for Ruben Dias if Laporte leaves for Barcelona.

While it is not confirmed if Laporte will leave for Barcelona in this transfer window or the next, it is highly critical for City to analyze their options just in case the transfer goes through. Pep has two brilliant centre-backs as options, with each one of them having their own set of strengths through which they can contribute to the performance of the team. They are currently 10 points ahead of second-placed Chelsea on the table, and will want to maintain this gap with the other clubs.

The Spanish Evolution of David Silva