This post initially appeared on our sister site totalfootballanalysis.com by the excellent David Sellini

Few expected Fulham to upset the reigning Premier League champions at the Etihad and despite a good effort Manchester City were head and shoulders above the Londoners. In this tactical analysis we look at how Pep Guardiola defeated Slavisa Jokanovic’ men to keep the pace with Liverpool and Chelsea.

Pep Guardiola has a reputation as a tactical mastermind who tweaks his side in previously unseen ways. Against Fulham, however, he set City out in a classic 4-3-3. The back-four picked up fairly standard positions and the wingers hugged the touchline. In midfield, Fernandinho sat deep with the two Silva’s, Bernardo and David, played in each half-space. 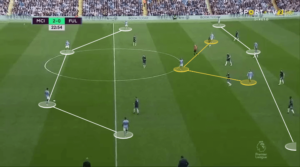 This setup gave City perfect coverage of the five vertical lines in the final third. Sterling and Sane played in the wide spaces, Aguero in the central space, David Silva in the left-sided half-space and Bernardo in the right-sided half-space. The fullbacks, Fabian Delph and Kyle Walker, positioned themselves slightly inwards when attacking to provide a diagonal passing option to the wingers and to guard against counter-attacks. One example of this can be seen below with Delph on the ball centrally and Sane wide. The front five of City create width and central options across the frontline. 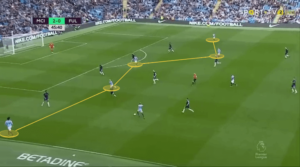 David Silva’s movement was an integral part of City’s attacking system when trying to break Fulham down. He frequently found space behind Jean Michael Seri in the left-sided half-space. One such example is the image below. 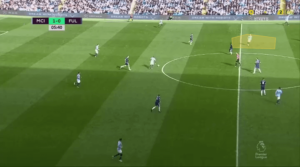 Below is another example. As Sane (white) drifts inside he occupies the right-back Cyrus Christie. Silva uses the wide space to become a free man by drifting wide to receive the ball with plenty of time to pick his pass. 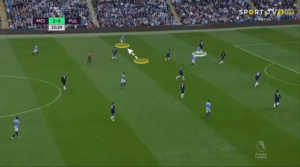 Silva’s movement was key and it was no surprise to see the Spaniard involved in so much of what City created. His performance against Fulham oozed intelligence and class.

Fulham were confident and really tried to play their way forward. Unfortunately for them, they lost the ball when trying to build an attack after just 75 seconds and City countered to score the opening goal. City routinely pressed high, as seen below, but often left space behind the initial press and Fulham did break the press on a number of occasions. 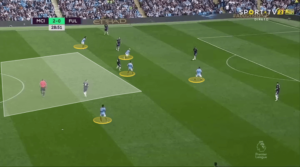 Fulham’s three man midfield of Seri, Stefan Johansen and Kevin McDonald always looked to take the ball even in tight spaces and their confident led to Fulham having more attacks and more possession than if they simply would have kicked the ball long. They took risks, got some rewards but was also punished.

The sheer pace of Sterling and Sane down the wings in attacking transitions were a threat when Fulham lost the ball in their attacking shape. The full-backs Christie and Ryan Sessegnon were high and City’s wingers could then attack the space between Fulham’s centre-backs and full-backs. One example is below. 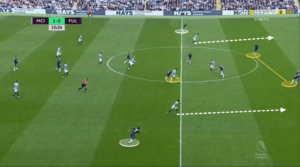 Fulham had evidently been inspired by Wolverhampton’s pressing schemes against Manchester City as they too set out to win the ball in central areas and counter through a centrally positioned front-three. The defensive shape of Jokanovic’ side was 4-3-3 with Luciano Vietto and Andre Schürrle starting just slightly off the striker Aleksandar Mitrovic. The aim was to prevent City from playing through the middle and steal the ball to counter 3 vs 2 against City’s centre-backs. 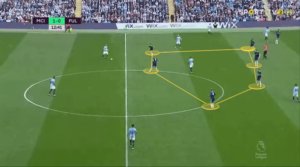 You can see the setup in the image above and how narrow the front three was. In the image below, Fulham have just won the ball in midfield. Vietto and Schürrle immediately looks to make runs forward. 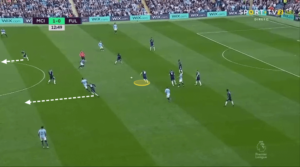 Fulham lost 3-0 and therefore failed to score. They did, however, create chances and their defensive setup might be something more clubs will take note of. Manchester City’s ability in possession was demonstrated again and again though, and never more so than in the build-up to their second goal. In the below image we see how Fulham press City very high. There’s five Fulham players in and around City’s penalty area. Ederson remains calm, finds Fernandinho who turns out of pressure and continues the attack. A few seconds later Bernardo has time and space in midfield and at the end of the attack, David Silva has made it 2-0. 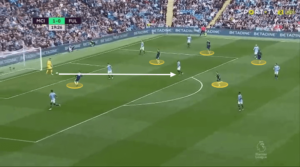 Fulham gave it their all and made a strong effort away at Manchester City but City’s quality was too much to handle. If they continue with that attitude and belief then Fulham will have a great season. As for City, they need to keep racking up the wins given the relentlessness of Liverpool and Chelsea so far this season. This was a good win, but they can still improve as Fulham did cause them quite a few problems.

Transfer Talk: Alejandro Grimaldo – Is the Benfica man the long-term...

Transfer Talk: Sergio Reguilón – A left-field option at the left-back...

Transfer Talk: Could Aubameyang be a temporary solution to City’s number...