The Premier League clash between Manchester City and Wolverhampton Wanderers – and their respective master tacticians – was supposed to provide endless analysis. In the end, however, it was a rather disappointing game for football fans. You could blame the early red card received by Willy Boly for the notable superiority of Manchester City.

The reality is that up to the 19th minute, the hosts were in total control of the game, with Wolves showing absolutely no response to Guardiola’s domination. An easy 3-0 win for Manchester City keeps them closely trailing Liverpool, hoping for the league leaders to stumble before the end of the season.

Although Manchester City’s possession was high at 74%, it wasn’t far from their average. In the last calendar year, they boasted 64%, according to Wyscout. Wolves only had two shots in the whole game, both of them off target. This resulted in a very low xG figure of 0.05, way below the Wolves average of 1.43.

It was the lowest of a Manchester City opponent since the Carabao Cup game against third-tier Oxford United last August 2018. Despite averaging 460 passes per game in the last calendar year, in the game against Manchester City Wolves only attempted 238 passes, with 78.6% successful compared to an average of 84.5%.

This brief introduction tells a lot about a one-sided game that didn’t leave much for the analysis. Guardiola seems to have found a tactical set-up he feels comfortable with. Although he tends to change the tactical approach depending on the rival, we have seen some stability in the latest games in both the tactical disposition and the names chosen.

This is what Guardiola has felt more comfortable with historically since his Barcelona spell: two central defenders, two wing-backs that play high up the pitch, one central midfielder, two inside midfielders and three players in the forward line, two wide open and one centralized.

As Manchester City positioned themselves high up in the pitch, they focused their offensive movements on the left flank with Sane as the main weapon. At some points, there were almost five players high up the pitch.

Wolves showed a surprisingly passive defensive attitude, with their players not tightly marking Manchester City players and rather marking spaces over players. This is a crucial mistake considering not only the very high individual quality of City’s players, but also how high they play. These areas are where you should avoid giving them manoeuvrable spaces. 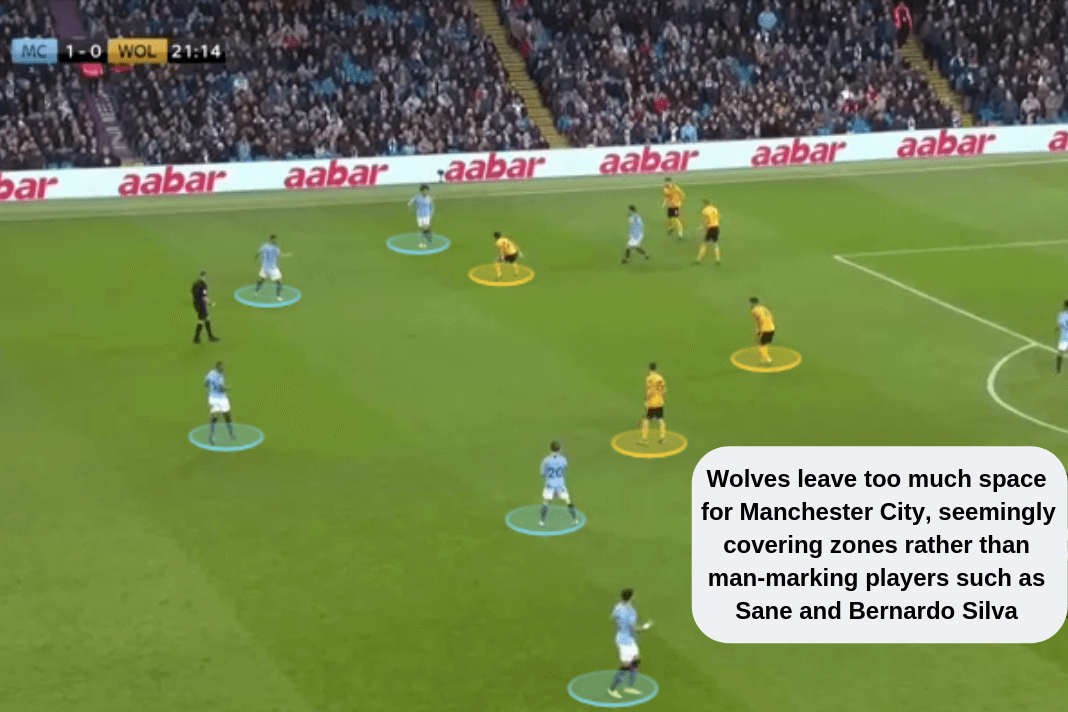 Fernandinho did a good job in anticipating Wolves players, but he was surprisingly imprecise when passing the ball. While we are used to seeing the Wolves play with three central defenders, we saw Nuno Santo play with five defenders trying to put a wall between their goal area and Manchester City’s attack.

This resulted in fewer players in the middle of the pitch, allowing David and Bernardo Silva to position themselves closer to Gabriel Jesus. The two wing-backs, Danilo and Kyle Walker, acted as inside midfielders next to Fernandinho. The first goal came from an excellent pass from Laporte to Sane, accelerating the pace of the play by increasing the ball speed rather than the player’s speed. Such a sequence usually surprises the rival more than a 1v1 duel.

One goal and one player advantage too much for Wolves

Being one goal and one player down became a too big an obstacle for Wolves to overcome. They receded and focused on containing the result and not suffering a big defeat. They kept the line of five defenders and left Raul Jimenez and then Adama as lonely offensive players fighting against the City defence.

On the other side, Guardiola’s team made some interesting attacking movements that puzzled Wolves’ defence. At times, they had as many as five players in the offensive line. They also made some very interesting positional swaps to pull defenders out of their line or lose their markers by dropping back and receiving with wide spaces in the middle. 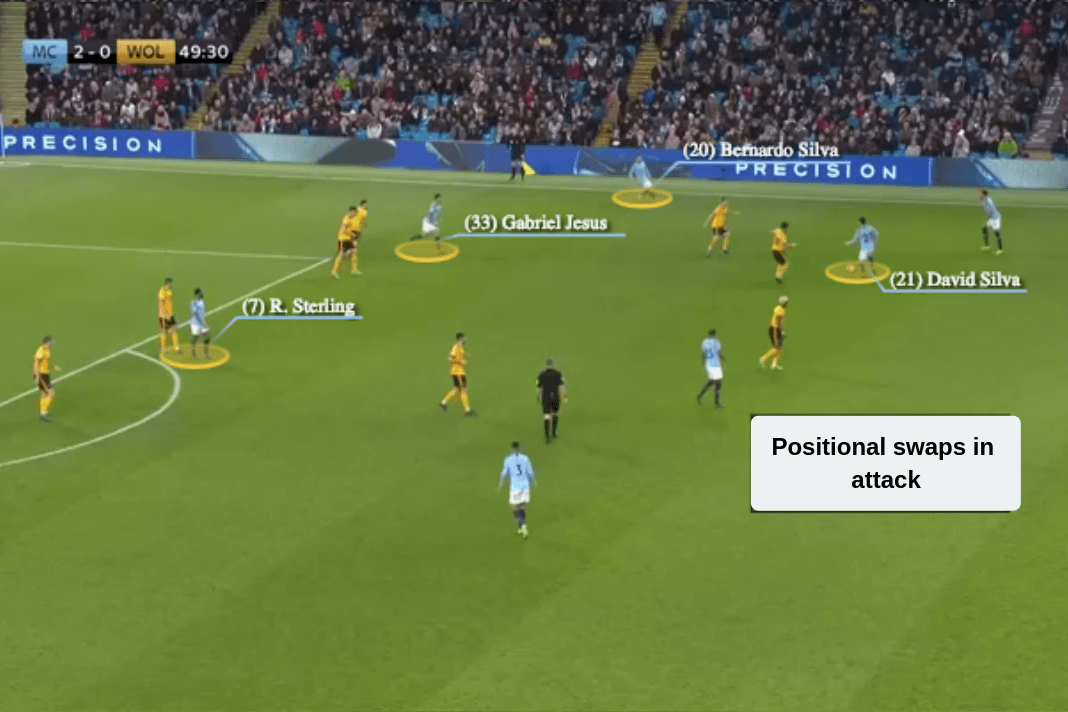 This allowed them to receive, turn around and have a wide-open pitch in front of them to progress. The subsequent open spaces helped Manchester City to perforate Wolves’ defensive line. For example, at some points you saw Sterling positioning closer to Gabriel Jesus when the attack was on Sane’s side, leaving the right wing open for Bernardo Silva. 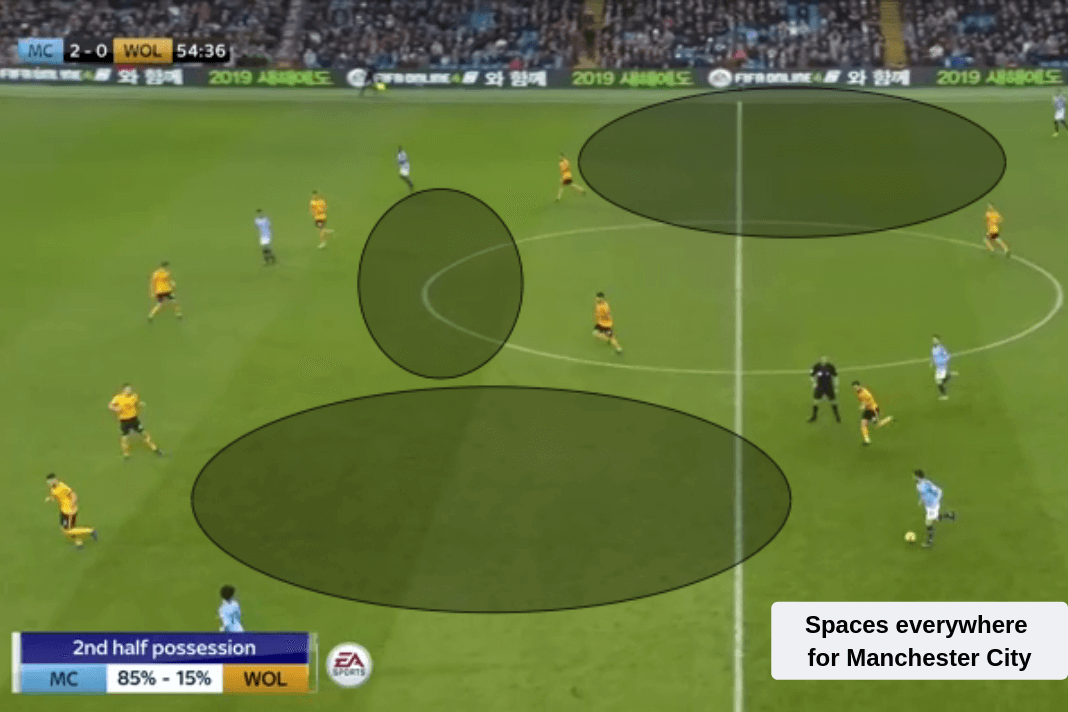 Also, Sane did move back closer to Fernandinho while David Silva was playing wider. This movement generated more spaces for Gabriel Jesus, as defenders moved wide and forward. As a result, the Brazilian was able to participate more in the build-up of City’s attacks. The more centralized position of Sterling, as seen in the picture below, allowed him to connect more with the attacking phase as his team opted to attack more on the other side.

David and Bernardo Silva again put in good performances, which raises the question: what will happen with Kevin de Bruyne? Once irreplaceable in the starting XI, he is slowly coming back after several injuries. Coaches usually say it’s a good problem to have good players fighting for a spot. Having players that are used to being in the starting line-up, however, may turn into a more complicated situation.

So far it’s a non-issue, but Guardiola should be careful. This is particularly true when the forward players are also performing well, giving him less space to change the tactical approach. We have to remember that Guardiola has tried Bernardo Silva as a right winger, but this performance as an inside midfielder was far superior, while Sterling is also playing at a high level.

Manchester City had an easier than expected game against Wolves. It was a disappointing performance by Nuno Santo’s team, even before the red card suffered in the first half. The race for the Premier League title is still long, with a newly relevant factor: Manchester United seem to be back in the hunt. Both Liverpool and Manchester City have to play against Solskjaer’s team, one of the few that could outplay the Premier League’s two top sides.

If you love tactical analysis, then you’ll love the digital magazines from totalfootballanalysis.com – a guaranteed 100+ pages of pure tactical analysis covering topics from the Premier League, Serie A, La Liga, Bundesliga and many, many more. Pre-order your copy of the January issue for just ₤4.99 here, or even better sign up for a ₤50 annual membership (12 monthly issues plus the annual review) right here.

Under the microscope: Kevin De Bruyne running the show for Manchester...

From One De Jong To Another