The race for the Premier League title was almost over a few weeks ago when Manchester City lost to Newcastle. A few weeks later, everything looks different. Pep Guardiola’s team are back on top, although they have played one game more than Liverpool. On Sunday, Liverpool hoped that the Citizens could struggle facing Chelsea and Maurizio Sarri.

However, Liverpool were left disappointed. Manchester City demonstrated their attacking strength and effectiveness by destroying Chelsea 6-0 at home. At this point of the season, City look like the most efficient attack in the whole of Europe. Besides Agüero’s miss from about eight yards, Pep Guardiola’s side used more or less every chance.

We have analysed Manchester City multiple times this season and are also uploading an analysis of the game from Chelsea’s point of view. Considering that Pep has experimented less this season I decided to analyse a few details to give you more insights into the strengths of the Citizens. 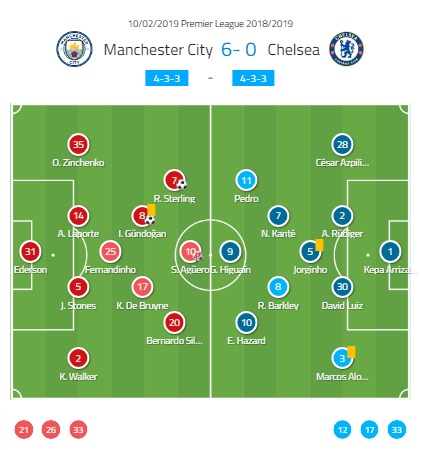 The role of Gündogan

Looking at Guardiola’s teams in Barcelona and especially Munich, you notice that the Catalan coach changed formations and roles more often. At City, he has decided to stick to his 4-1-4-1 most of the time.

How does Rice compare with Fernandinho after impressive City performance?

Under the microscope: Jack Grealish – A disappointing first season at Manchester City

Raheem Sterling getting loads of interest from multiple clubs

Under the microscope: Phil Foden – A statistical review of the Premier League Young Player of the Season