This tactical analysis focusing on Pep’s Man City in their trip to Anfield originally featured on totalfootballanalysis.com

Prior to this match in the English Premier League, the narrative was firmly set that the Manchester City coach Pep Guardiola was very much coming up against an opponent, in Jurgen Klopp and Liverpool, who had figured out how to combat the Spaniard’s tactical approach. The tail end of the 2017/18 season saw the two sides meet on three separate occasions, twice in the latter stages of the Champions League and once in the Premier League with Manchester City failing to overcome their opponents in any match.

This season sees the two rivals from the North-West of England going step by step at the top of the Premier League table as they race to become champions. It is hard to look beyond one of these two sides finishing at the top of the table at the end of the season in May, despite the form of Chelsea under Maurizio Sarri and Arsenal under Unai Emery. These factors combined to make the first meeting of these two sides and these two coaches all the more interesting as the story lines continued to build around them.

When Guardiola was first appointed as coach of Manchester City back in 2016 there were concerns raised amongst the English media that the Spaniard was too set in his own style of football to be able to adapt to the English game and indeed in his first season this was borne out to an extent as sides were able to disrupt the tactical system of City through physicality and direct play. Last season, we saw clear signs that Guardiola was more than capable of adapting aspects of his tactical approach if not changing his overall ideals. Indeed, last season saw City blow away the majority of their opponents in some style – not Liverpool though.

That brings us to now and Guardiola’s third season in charge of Manchester City as we wait to see which small amendments he has planned to this City side. In his third season in charge at Bayern Munich in Germany, we saw the culmination of his approach at the club as Bayern played some of the best football seen in Europe for some time, or probably since Guardiola’s Barcelona side. Will we see something similar this season for City, and more importantly have they found the answer for Liverpool?

In terms of the team news from City, there were a couple of small surprises sprung by Guardiola prior to the match with the Portuguese international midfielder Bernardo Silva and the Algerian international Riyad Mahrez in the lineup. With Raheem Sterling also in the side from the start, this gave City three players who had at some point played wide on the right of the attack for Guardiola this season.

In the end, we saw Sterling play predominantly from the left, despite the fact that the German Leroy Sane was on the bench, and Bernardo Silva took up a central midfield role whilst Mahrez played in his more comfortable position wide right. This was not, however, the end of the intrigue as we will see further on when we examine the midfield composition that City used.

The only other notable piece of team news saw Benjamin Mendy return to play at left back.

With the Belgian international midfielder Kevin De Bruyne still recovering from injury, we have seen a more significant role given by Pep Guardiola to the German Ilkay Gundogan as one of the two ‘8’s in the coaches preferred 4-3-3 system. In recent weeks, however, questions have been raised regarding the level of performance from Gundogan and this match saw a reaction from Guardiola as he installed Bernardo Silva into the starting lineup.

The expectation from most when the team news was released was that Bernardo Silva would play as one of the ‘8’s alongside David Silva. Instead, as the match went on we saw a change in system from Guardiola with Bernardo Silva playing centrally alongside Fernandinho as a double pivot at the base of the midfield. 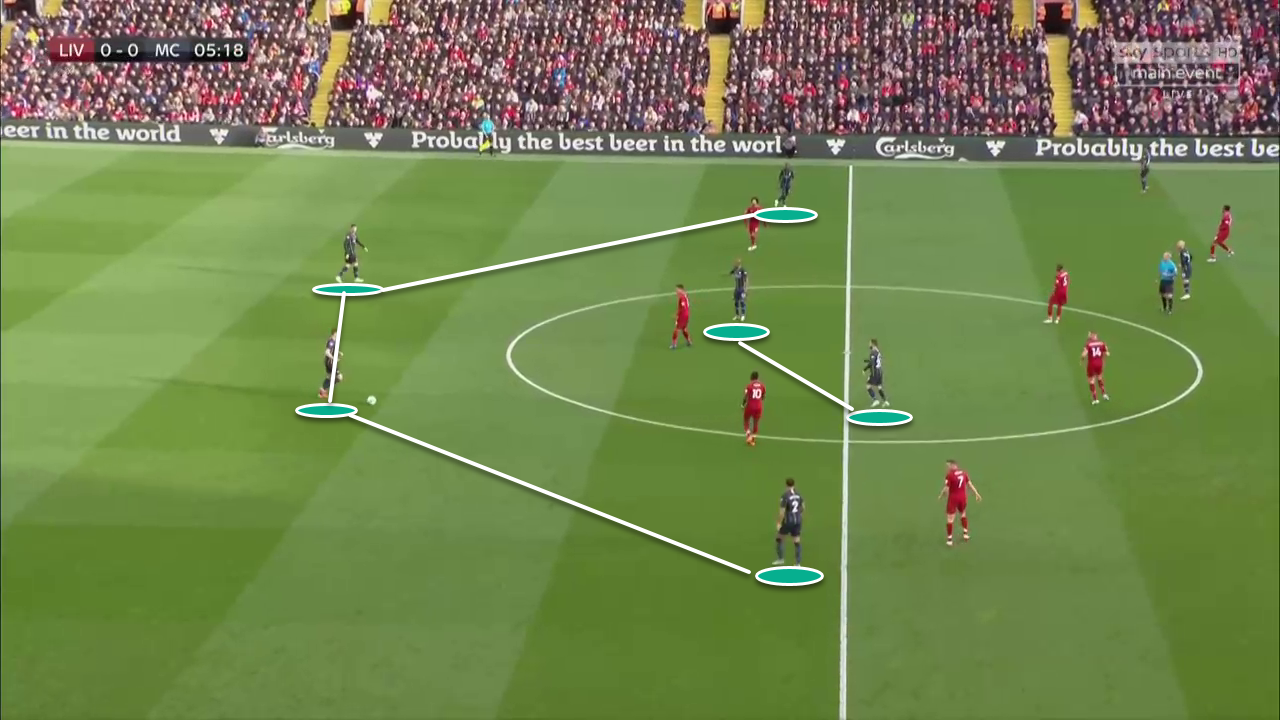 Here we see City as they build up from the back. Both central defenders John Stones and Aymeric Laporte are comfortable in possession and that allows the fullbacks to progress to the same line as the controlling midfielder or the ‘6’. In this match, though we saw Bernardo Silva more and more into the double pivot position. This move was designed to increase the security that City had on the ball as they looked to progress their attacking phase forwards. Having two deep-lying central midfielders gives different passing angles and passing lanes as the ball is moved forward. 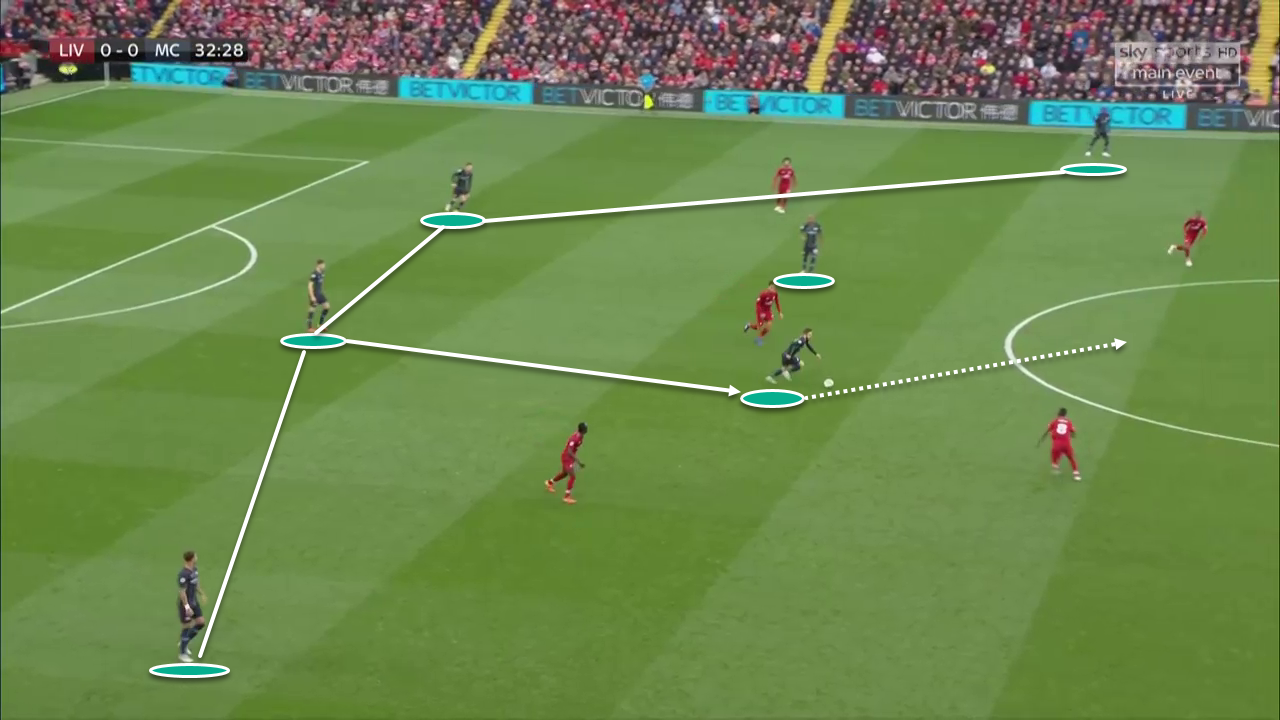 Again in this example, we can see the back four for Manchester City with Bernardo Silva and Fernandinho as the double pivot at the base of the midfield. The match is relatively simple, Liverpool press in the first instance with their three forwards and then with one midfielder moving to join them. The back four with Fernandinho and Bernardo Silva give then a 6v4 advantage in the build-up phase. Here Stones plays a simple forward pass into Bernardo Silva who is then able to turn and burst immediately into space as he bypassed the initial press from Liverpool.

Having a player with the ability on the ball of Bernardo Silva playing deep in midfield gives an extra dimension to the attacking build-up from Manchester City. His ability to receive the ball facing his own goal before turning and driving forward into space. The positioning of Bernardo Silva and the change from a 4-3-3 to a 4-2-3-1 structure also had a knock-on effect for David Silva further forward as he played more like a traditional ’10’. 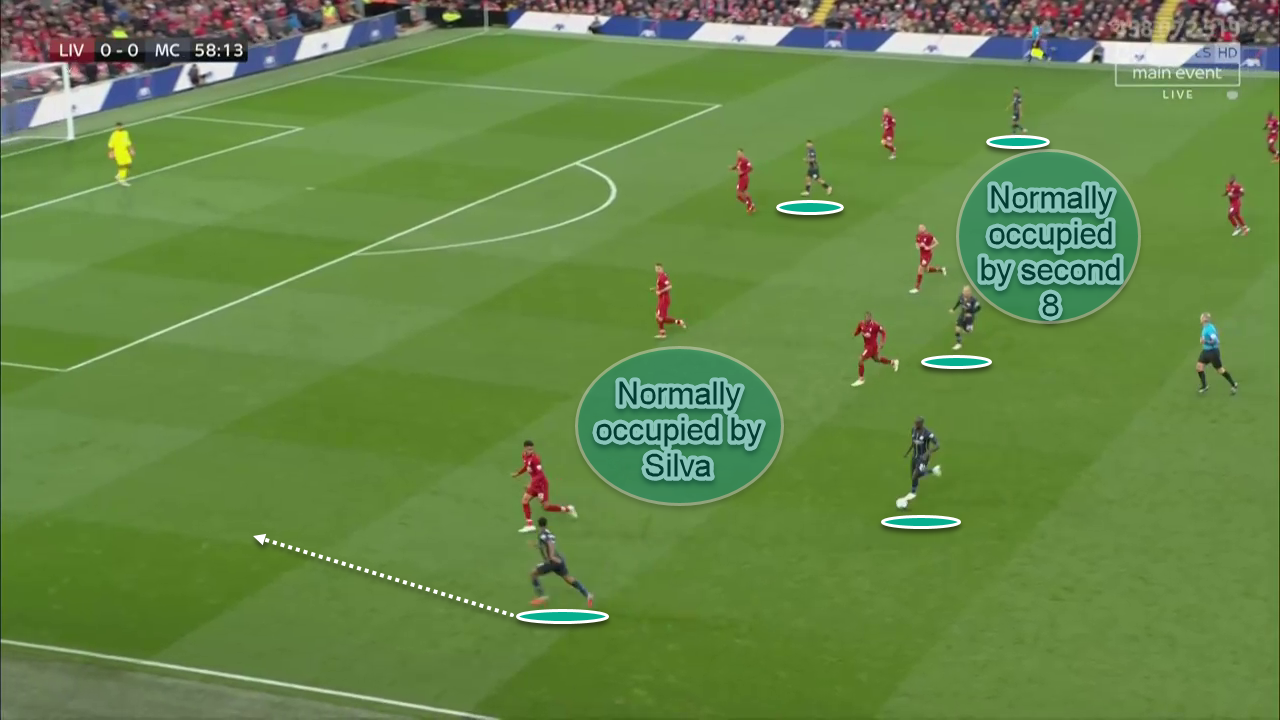 Here we see City progress the ball to the edge of the final third with Mendy currently in possession as he moves forward towards the final third. He has Raheem Sterling moving outside and distracting the Liverpool right-back Joe Gomez. You can see that David Silva is moving across to support Mendy but I have highlighted the position that Silva would occupy in the 4-3-3 structure. I have also highlighted the zone on the other side that the second ‘8’ would take up.

As such David Silva was expected to work across the full width of the field as opposed to the centre and the left side.

Traditionally under Pep Guardiola, we have seen Manchester City play with incredible spacing in the attacking and defensive phase. Their method of progressing the ball forward and of pressing and regaining possession is built upon the concept of close positioning between players that allows quick passing combinations and support when pressing the opponent.

Most of the time we see this spacing move very fluidly, especially in the attacking phase, as they move the ball forward. In this match, however, there was a clear preference from City to remain compact in both phases of the game with their transitions also being less dynamic than we are used to seeing from a Pep Guardiola team. 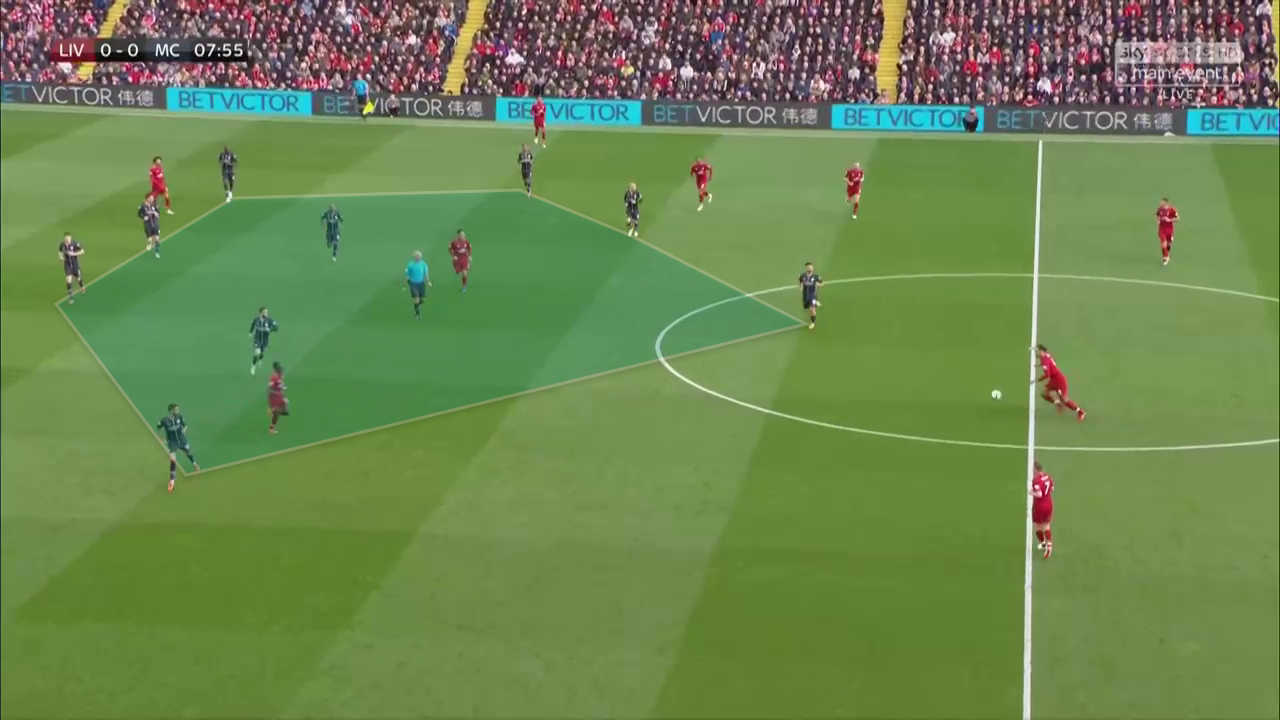 In this example, we have all ten outfield players behind the ball for Manchester City as Liverpool look to progress the ball forward. Once again there is a clear difference in the positioning of Bernardo Silva as he is deeper in the block instead of being on the same line as David Silva. If he was slightly further forward then I would have expected to see a more proactive pressing system from City.

Instead, City were content to remain compact to try to limit the spaces that Liverpool could access when they attacked, especially in more central areas. They sat deeper and waited for Liverpool to either make a mistake in the buildup or to play the ball into a tight area that then can be pressed more easily.

As well as being compact in the defensive phase there was a slight change in the way that Guardiola used his fullbacks. On the left, we saw Benjamin Mendy operate as normal varying between moving forward in the half space or the wide areas depending on the positioning of Sterling ahead of him. On the right, however, Kyle Walker was far more defensive than normal. In the attacking phase he rarely progressed further than the same line as Fernandinho and although he still offered a support option for Mahrez he did so from a deep position as opposed to moving up on the overlap as we would normally expect. 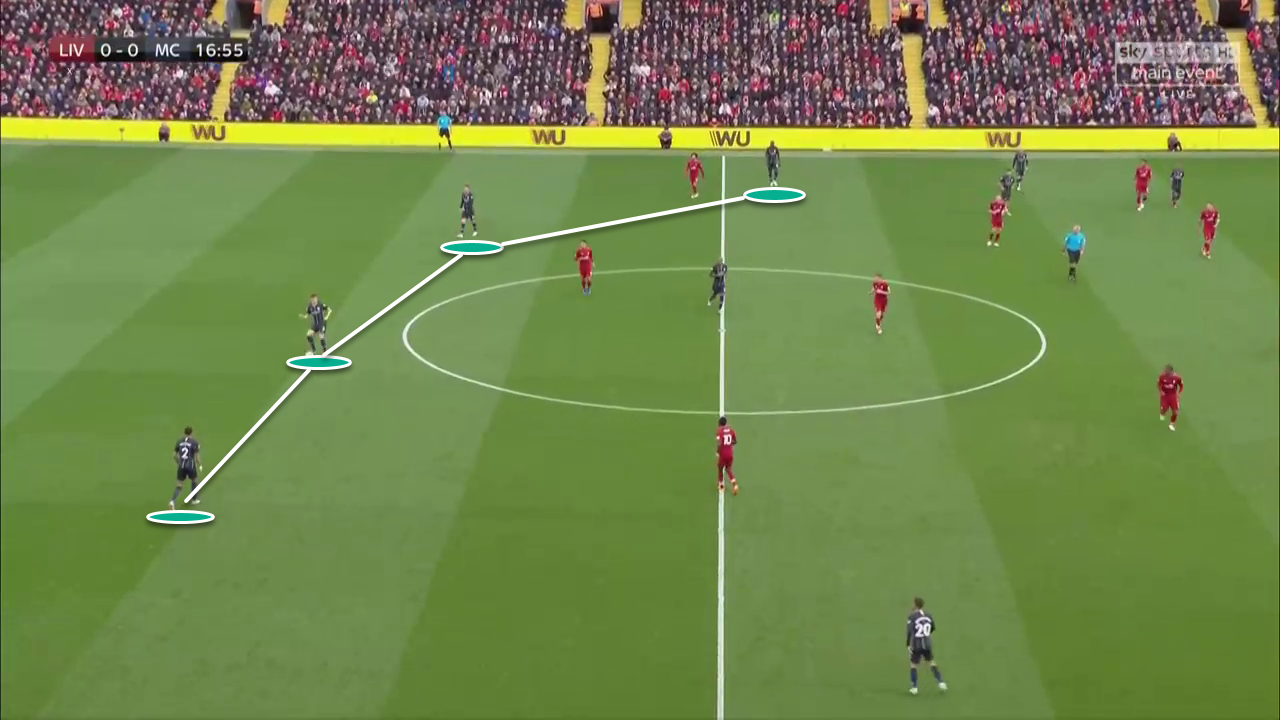 Here we see City in possession with Walker retaining a deep position on the right-hand side. City would form this back three whenever they were in possession of the ball.

The way that Pep Guardiola and Manchester City adapted their game plan to counter the attacking threat was indicative of his respect for Liverpool and Jurgen Klopp. The match was not a classic in terms of goalmouth action but the move and countermove approach of the two coaches makes it exceptionally interesting viewing from a tactical perspective.

The repeat match later on in the season with Liverpool travelling to Manchester may well have a bearing on the destination of the league title. You get the feeling that this was only part one of the story and only a brave man would bet on the outcome of the battle between the two sides in the long term.