This tactical analysis of Hoffenheim vs Manchester City first featured on totalfootballanalysis.com

The second matchday of the 2018/19 Champions League gave us the tantalizing prospect of a clash between Hoffenheim and Manchester City, or more appropriately between Julian Naglesmann and Pep Guardiola. The two coaches are known to admire one another having publically admitted to having meals together on several occasions where they would talk in-depth about the tactical side of the game. Whilst Guardiola was coaching Bayern Munich in the Bundesliga between 2013-16 the two coaches came head to head on several occasions with Naglesmann’s Hoffenheim side only gaining a single point from all their matches.

History then suggests that Manchester City came into this match with the upper hand although you cannot ignore the superb job that Naglesmann has done at Hoffenheim since taking over at the club in 2016. This is the second successive season in which Hoffenheim have qualified for Champions League football under their young coach, a record make all the more remarkable by the fact that the club had never qualified for the competition before. That Naglesmann coached the club to this achievement despite losing his best players consistently over the last two seasons to ‘bigger’ sides further strengthens the impression that Naglesmann has done an excellent job. As such it came as no surprise that in the summer the announcement was made that Naglesmann had agreed to take over as coach of RB Leipzig after the 2018/19 season. Before leaving however there is no doubt that he will be looking to maintain his impressive record and secure another top-four Bundesliga finish.

Hoffenheim, however, went into this match in the midst of something of an injury crisis with the key loss undoubtedly being their captain and key defensive player Kevin Vogt. This loss has seen Hoffenheim line up in a variety of tactical structures so far this season and Guardiola and his coaching staff would have been kept guessing right up until kick off in terms of what we would see from the German side. Manchester City, on the other hand, came into this match knowing that they had to win following their loss on the opening matchday against Lyon of France. 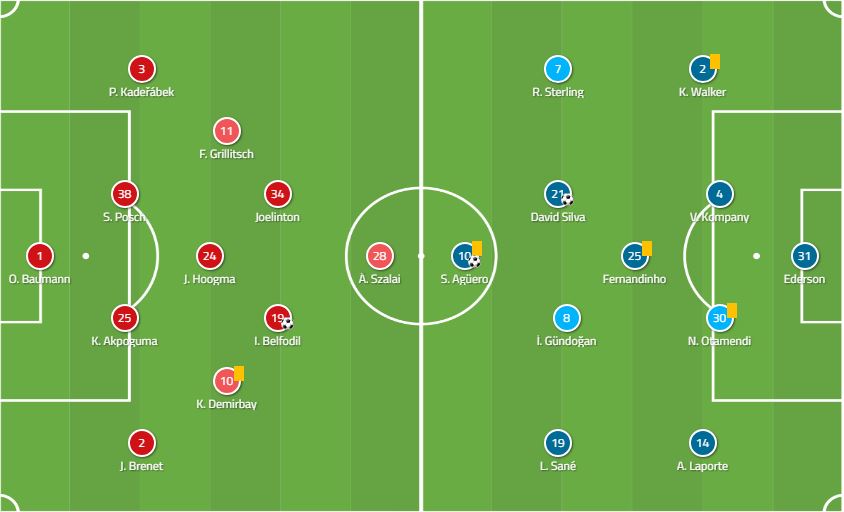 The team news for Hoffenheim was interesting with Naglesmann choosing to adopt a back four despite having a clear tendency to play with a back three. This choice was balances slightly by the fact that they took up very different structures depending on whether they had possession of the ball or not. In possession Justin Hoogma, the 20-year-old Dutchman would drop back between Stefan Posch and Kevin Akpougma to form a back three.

Hoffenheim also started with Pavel Kaderabek on the left of the defence despite him being more comfortable on the right side. The key to their attacking gameplan, however, was Kerim Demirbay who would look to collect possession in central areas before driving forward into the Manchester City half.

There was no surprise with the Manchester City lineup other than at left back where Aymeric Laporte started. The rest of the first team all but chose itself although the Portuguese international Bernardo Silva may have had an argument for starting as one of the two ‘8’s in place of Ilkay Gundogan.

Hoffenheim commit to the attack

The match started at a remarkable pace with Hoffenheim taking the lead as early as the Algerian striker Ishak Belfodil found space between City defenders in the 1st minute. After that opening goal, Manchester City were quick to assert their dominance as they played their way back into the match and went on to dominate possession from there. That does not mean though that Hoffenheim were willing to just drop back into a deep defensive block to try to negate the threat of City.

Instead, Hoffenheim were quick to move forwards as they transitioned from the defensive phase to the attacking phase, indeed they were happy to commit waves of attacking players forwards as they looked to overload the defensive structure of City. Indeed after the match, the veteran Belgian defender Vincent Kompany referenced the fact that since City defend with only two or three players they were becoming stretched as Hoffenheim flooded forwards. 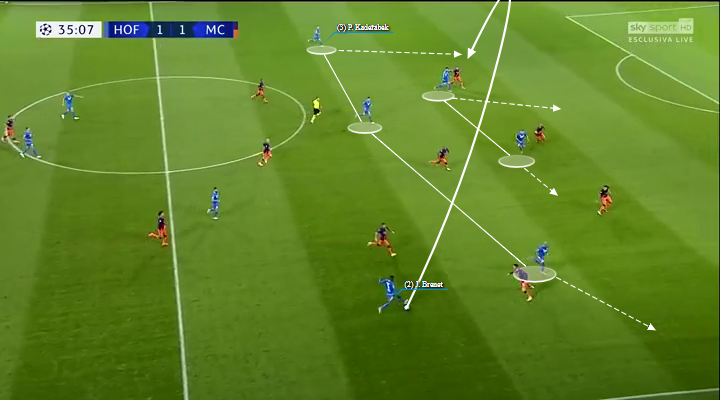 As you can see from this image taken from the first half of the match the two fullbacks Joshua Brenet on the right and Pavel Kaderabek on the left were key for Hoffenheim as they transitioned into the attacking phase as both would look to maintain the width and move high up in towards the final third. In the central areas, the attacking players would look to make runs in and around the defensive lines of City looking to pull the City defenders out of position to open up space that could be exploited. 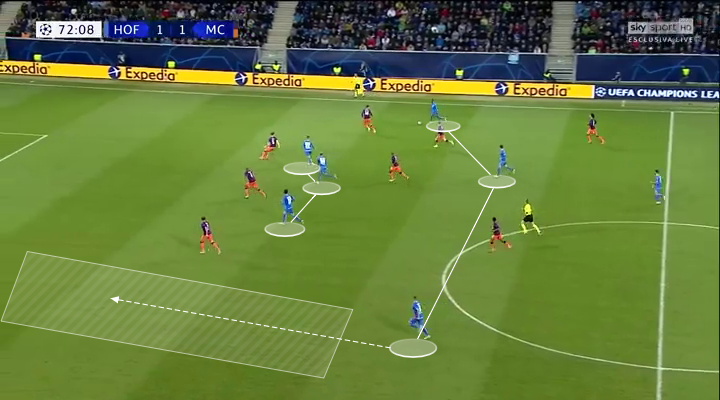 This was taken from near the end of the game with the score still tied at 1-1. Even then Hoffenheim showed no sign of retreating back into a deep defensive structure and once again they were looking to move forward to try to get the second goal themselves.

The three advanced players for Hoffenheim are compact in the central area, this forces the Manchester City defensive line to also move narrow and creates the space that can be exploited on the far side with the run of Kaderabek from left back.

City use wingers to stretch the pitch

There are few coaches who have been the subject of more tactical analysis articles in recent years than Pep Guardiola. By this point, we know the central ideas behind the Spaniards tactical structure and in this match, two key components of that structure were evident once again.

First of all, we saw the City wingers Raheem Sterling and Leroy Sane hold extremely wide positions in order to stretch the pitch horizontally and create space for the central players to exploit. 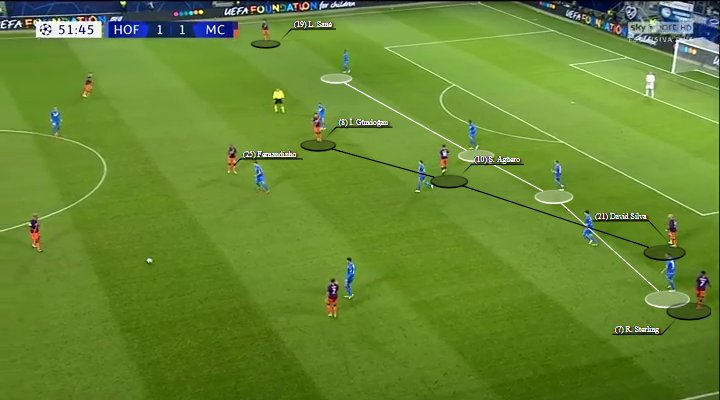 Here we see City in comfortable possession of the ball as Hoffenheim have dropped into a deeper position in order to protect their penalty area. Both Raheem Sterling on the right and Leroy Sane on the left are positioned wide in order to stretch the Hoffenheim defensive structure.

As you can see on the ball near side (right) Sterling is covered by the defending player. On the ball far side (left) though Sane is isolated in space. A quick switch of play would force the Hoffenheim defence to adjust and slide across the field, this process of movement can then create gaps in the defensive structure that can be exploited by an intelligent attacking team, like Manchester City. 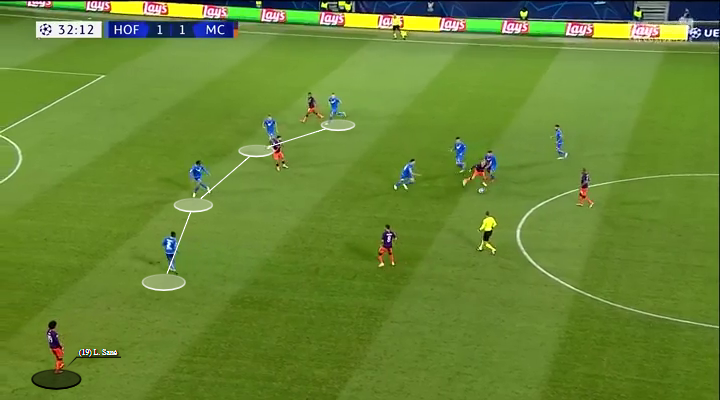 Again here we see Leroy Sane isolated in space as Manchester City look to attack and penetrate into the final third. David Silva is in possession of the ball centrally but he is being closed down by three players as Hoffenheim look to press and win the ball back. Sane maintains his wide position and does not get attracted inside to look for the ball. As soon as the ball is moved out into space and played out left to Sane he is isolated against a fullback who is already trying to recover his position having been attracted inside to look for the ball.

If overloading and isolating either side of the field is a key trait of teams managed by Pep Guardiola then using inverted wingbacks as auxiliary central midfielders is another. When Guardiola was initially appointed as Manchester City coach there was a lot of talk about whether we should see him ask his fullbacks to play inverted as he had done with Phillip Lahm and David Alaba and Bayern Munich. We have seen City play in this manner this season although not in every game, indeed in some games we see fullbacks for City play traditionally and then move into an inverted position afterwards. 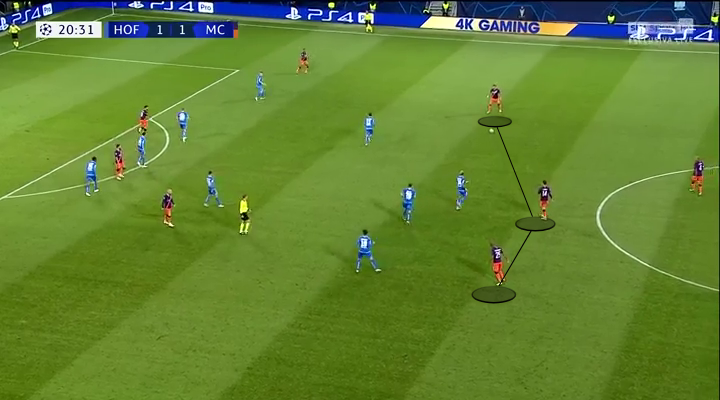 In this match, we saw both Kyle Walker and Aymerick Laporte offer options out wide in deeper areas before moving inside to firm up the interior of the field when City were in periods of prolonged possession. As you can see above Laporte is actually the central player with Fernandinho to the left and Walker to the right.

This positioning strengthens the centre of the field allowing the attacking players more freedom to move forward and isolating the wingers out in the wide areas. 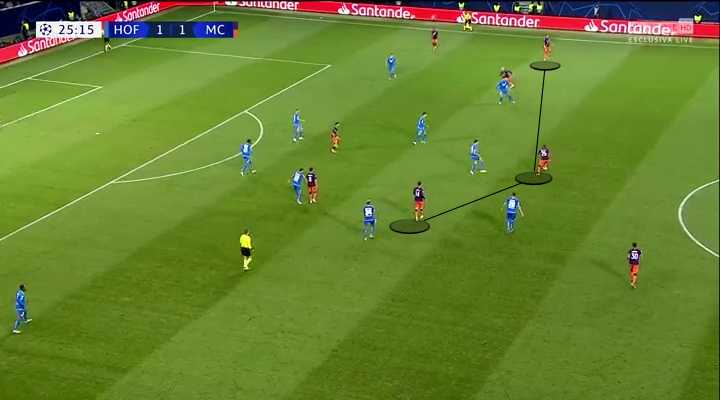 Here once again I have linked the positioning of Laporte, left, Fernandinho, central, and Walker, right, as Manchester City are in possession of the ball. With Laporte moving into a central area he forces the Hoffenheim block to become even more compact opening up space in the wide areas that the wingers can exploit and use.

In the end, a fascinating match was decided when David Silva found the space to shoot inside the 18-yard-box with minutes left to play. Hoffenheim will come away from the match disappointed that they did not earn at least a point and that in itself is a testament to how well they played over the course of the 90 minutes.