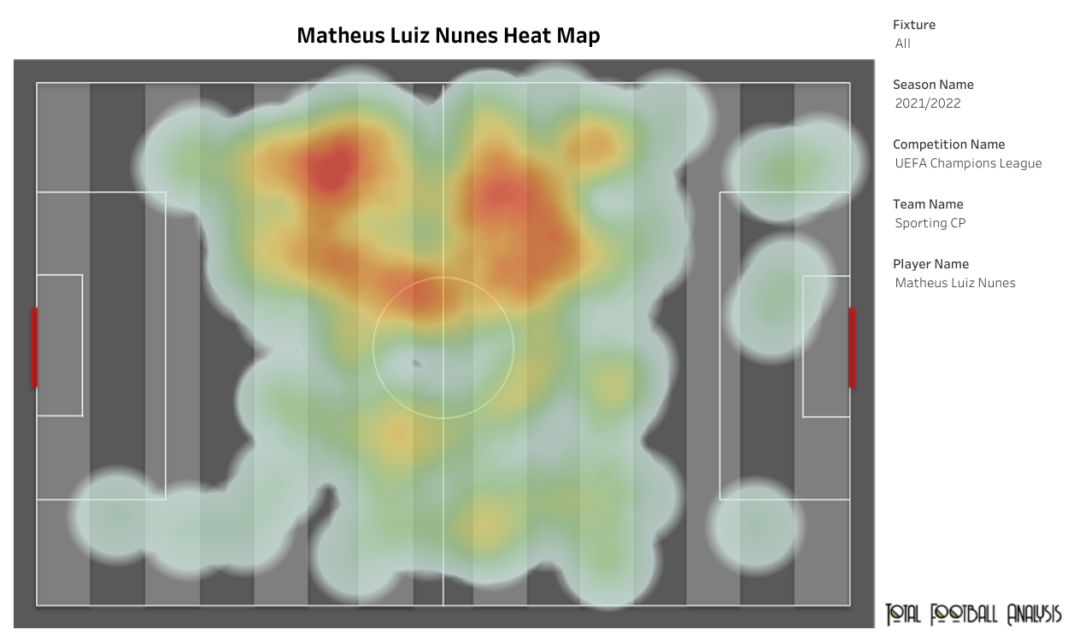 Coming into this season, Manchester City have a stacked midfield. With Kevin de Bruyne, Bernardo Silva, Phil Foden, Rodri, İlkay Gündoğan and new signing Kalvin Phillips, their midfield department is vastly better than the majority of the teams in England as well as the rest of Europe. However, Gündoğan’s contract is ending in June 2023, and there is little to no sign that he is going to extend it. If that is the case, the Cityzens will look to sell the 60 capped German international. According to reports, Manchester City are planning to replace him with Sporting Clube de Portugal’s Matheus Nunes. 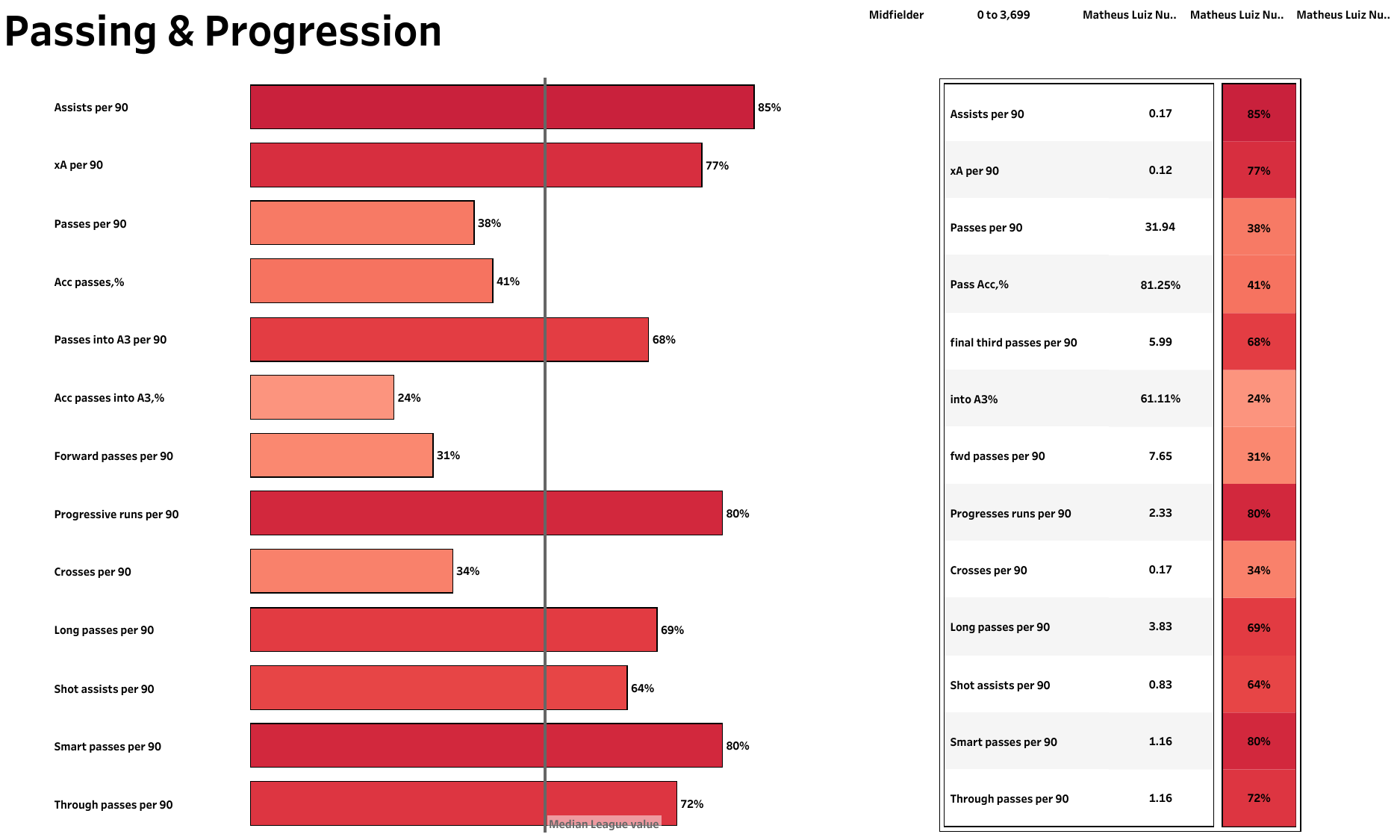 Nunes played 50 matches across all competitions for Sporting Clube de Portugal last season, including six in the UEFA Champions League. He was ever-present, playing 510 minutes in the competition. During his time, he provided two assists and slightly outperformed his xA. He was not as involved in the build-up play as he averaged only 32 pass attempts per 90 at an 81.25% accuracy. The midfielder made 2.33 progressive runs per 90, good enough for the upper quintile. He also completed 1.16 smart passes per 90 and through balls per 90 each. Nunes put up 11.3 defensive actions per 90 and had a success rate of 81%, the latter putting him in the upper quartile. He was also above average as far as defensive duels were concerned, having attempted seven per 90. However, his biggest weakness was his lack of aerial ability. Despite standing at 183 cm tall, he could muster only a 33.33% win rate in aerial duels, and he competed in only one per 90. But the Portuguese international, who was born in Rio de Janeiro, compensated for his lack of aerial prowess by contesting more loose ball duels, with nearly 4.5 per 90 to his name. He made four interceptions per 90 and five recoveries per 90 but also earned three yellow cards in the six games he played. 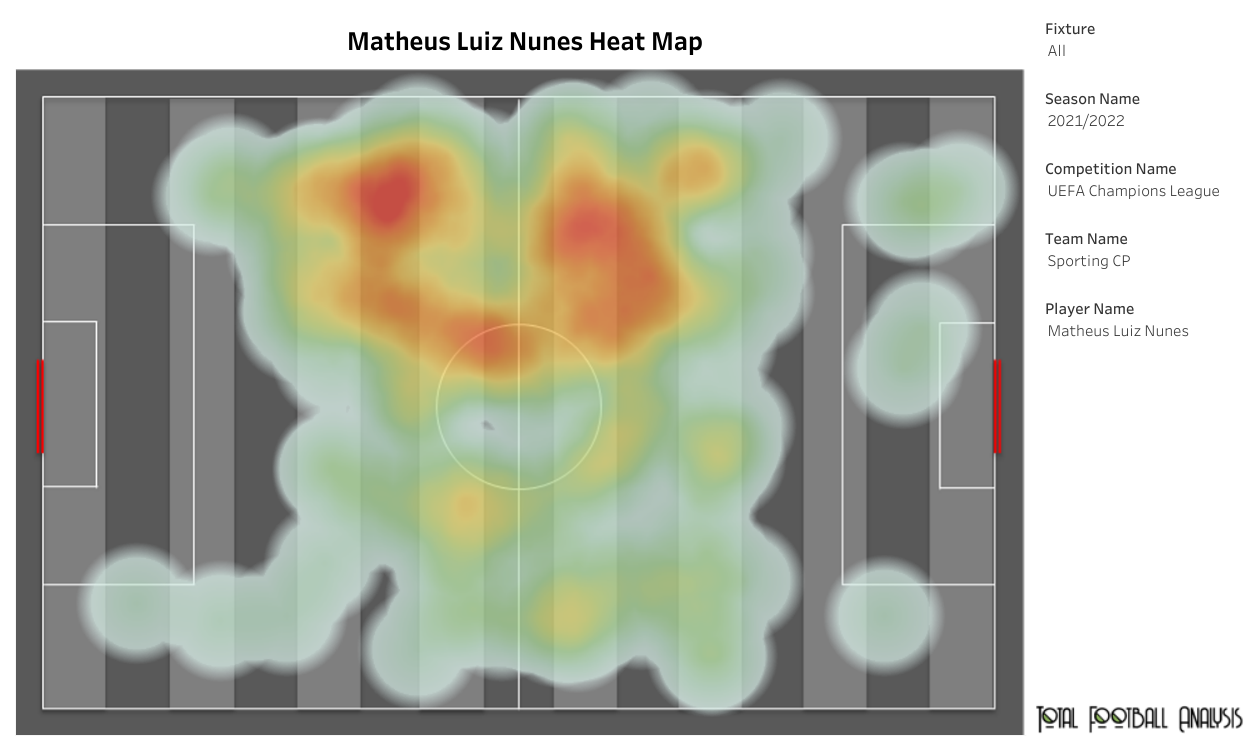 Nunes was highly involved in the midfield. He operated on and from the left-hand side, being a useful option and providing cover for other players in the team as and when needed. The numbers back this up, as he attempted 22.9 pressures per 90 (of which 6.61 were successful), 3.75 tackles & interceptions per 90, 1.61 clearances per 90 and 1.43 blocks per 90. 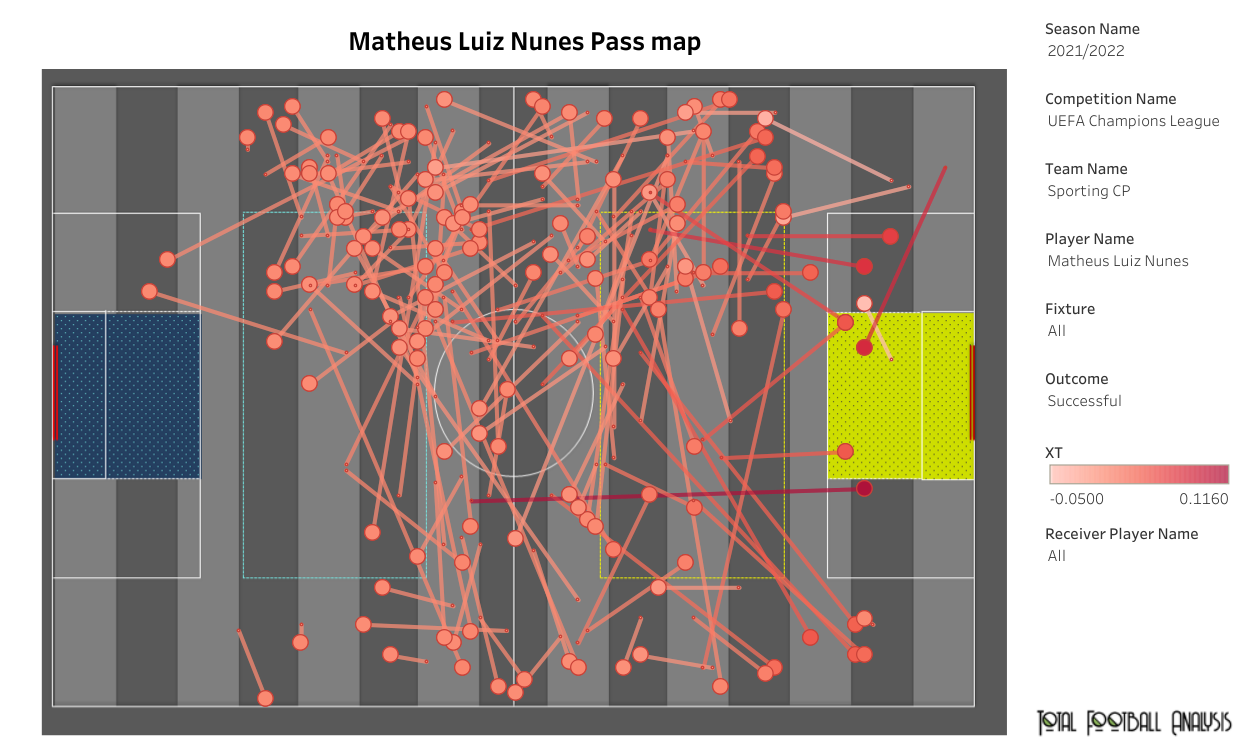 Nunes may not have been a volume passer of the ball, but that is because Sporting CP faced possession-heavy teams like Ajax, Borussia Dortmund and Manchester City in the previous season of UCL. As a result, he would not have seen much of the ball at his feet. Still, he completed 16 progressive passes, 14 balls into the final third and five passes into the opponent’s penalty box. Additionally, he made 18 progressive carries and 10 carries into the attacking third.

Matheus Nunes has been linked to a move away from Sporting Clube de Portugal in recent weeks, with several clubs vying for his services. Should Manchester City sell Gündoğan, then the club can attempt to buy the 23-year-old midfielder as his replacement.