Silva takes the ball and dribbles towards the defence. The Spanish midfielder plays a great game so far and participates at every attack of Manchester City. Consequently, Huddersfield´s defenders try to block the way towards the goal and the winger attacks Silva in order to stop him.

Silva passes the ball to the left side where it gets crossed in. Sergio Agüero is positioned where a good striker has to be and scores his third goal of the day. The cross was played by Benjamin Mendy. The young man from France played a great game and was responsible for a few goals during City´s successful 6:1 home win against Huddersfield.

After a complicated ACL injury, the defender from France is like a new signing for the team of Pep Guardiola. With him, Guardiola has a new option for the left-back position. Or as a left winger? Or has a left halfback? Which position and role Mendy even play in that Manchester City team?

Everyone who follows the work of Pep Guardiola knows that the Catalan man not only changes formation constantly. He also changes the position and role of his players between games or even during a single one.

With Benjamin Mendy Pep now has a new option for different roles at the left side. The French defender has a unique skill-set in City´s squad. His pace, dynamic and technical abilities seem to be similar to Kyle Walker´s attributes. However, Pep Guardiola uses Walker more as a centre-back or inverted fullback. In contrast to Mendy who covered the whole left side alone in their victory against Huddersfield. This game showed Mendy in different roles and positions. In this piece, I am going to show you how City used Benjamin Mendy in that game.

City started differently than against Arsenal the week before. This time Pep Guardiola changed the system in a way which allowed him to start both strikers Sergio Agüero and Gabriel Jesus. Furthermore, they played with only one “official” winger in Bernardo Silva who isn´t really a winger either. Officially Manchester City played without a left winger.

Consequently, Benjamin Mendy had to occupy the left side on his own. In possession, he stayed pretty wide trying to stretch Huddersfield´s defence shape. City´s wide wingers help them to either use the wings to attack or to find space in the centre of the pitch.

On the left side, Mendy got supported by Laporte, Gündogan and sometimes Gabriel Jesus which created a nice structured shape on the left wing. 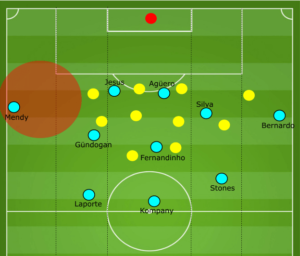 As you can see Stones who played as a right-back against the ball was more like a higher halfback in possession while Mendy stretched the defence of Huddersfield. Thinking that Mendy was less of a threat than Bernardo Silva was a mistake Huddersfield made. Because they didn´t value Mendy as a proper threat their fullback concentrated on staying centrally.

City moved the ball quite well and was able to push Huddersfield back to their own box. Due to the lack of pressing of Huddersfield and the good ball movement of City they could switch the play easily to Mendy who then had space to attack.

Benjamin Mendy is an underrated dribbler. He showed nice skills to beat the defender and cross the ball in. Most of the time the fullback had to step out to press Mendy. However, the French left-back used his speed and dynamic to benefit from the space Huddersfield left on his side. 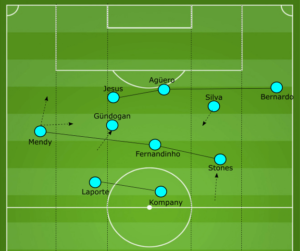 Gündogan and Silva could easily integrate into one of those lines. For instance, Silva sometimes moved higher to exploit the hole in the right halfspace. In contrast to Gündogan who could take the spot of Mendy in the midfield line when the French defender would push higher.

Benjamin Mendy´s position depended on the movement of Gündogan. If the German national-team player moved higher, Mendy would stay deeper in order to maintain that three-man midfield line of Manchester City. 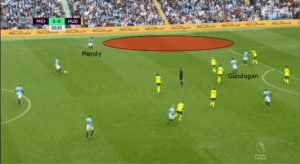 Here, you can see that Benjamin Mendy received a lot of space due to Manchester City´s focus on the centre. In that scene, he stayed deeper because Gündogan moved towards the box.

Most of the time he was responsible for crossing the ball in which was quite successful. His crosses were fast and most of the time located in the right space which caused trouble in Huddersfield´s defence. Compared to Bernardo Silva Mendy wasn´t that offensive and sometimes stayed deeper security wise.

When Huddersfield was in possession Pep Guardiola lined-up his team in a 4-4-2, which meant that Mendy and Stones build a back-four alongside Kompany and Laporte. With that move, Guardiola combined the strengths of build-up with a back-three and using a back-four defensively which is easier to play for most players.

However, Benjamin Mendy rarely had to defend because Huddersfield didn´t get the chance to attack structurally. Manchester City pressed well, and Huddersfield often wanted to attack by winning the second ball after a long pass of their defenders. Because of their structured shape in possession Manchester City was able to close the available space after losing the ball.

For the last 15 minutes, Pep Guardiola brought Leroy Sané into the game. In my portrait of the young winger, I described him as a player who likes to stay wide and starts his dribbling from that location. Consequently, the role of Benjamin Mendy changed. Due to the basic principles of positional play, Mendy moved into the halfspace. Occupying the wing with two players simultaneously doesn´t create a diagonal passing structure.

In order to maintain the described structure from above, Mendy now stayed deeper in the halfspace. Manchester City was therefore perfectly prepared to stop counter-attacks. With the substitution of Sané Bernardo Silva who occupied the left halfspace could constantly play higher because Mendy covered the deeper halfspace.

However, the new position of Benjamin Mendy could be valuable in the future because it fits his abilities and would help City to take advantage of his dynamic. 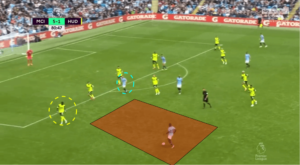 Huddersfield, for instance, focused on the centre the whole game. With a small change after Sané came on. The right-fullback was now focused on the German winger instead of covering the halfspace all the time. Consequently, the right winger of Huddersfield had to occupy that space.

Due to the position of Bernardo Silva between the lines he not only had to concentrate on covering space he moreover had to adjust his position to the movement of the Portuguese midfielder. As a result, Mendy often could move in the halfspace without getting pressured because Huddersfield didn´t want to risk opening space for the players between the lines.

So, Benjamin Mendy could attack with his dynamic after switches without getting pressured or he opened space by moving into the halfspace. When Sané or Mahrez received the ball at the sideline, Mendy would move into the halfspace but make a curved run towards the sideline to occupy the wing while the player with the ball could dribble towards the centre. Because of Mendy´s movement, Huddersfield´s winger had to follow a few meters.

Or Mendy would be a dangerous threat for through-balls when he didn´t interrupt his run and continue to move through the halfspace.

Pep Guardiola once used a fullback in a similar way. At Bayern Munich, he had a young highly-skilled player from Austria. You probably know him, it was David Alaba. Both Mendy and Alaba are dynamic quick fullbacks who are flexible. Both can either occupy the wing or attack through the halfspace.

David Alaba is probably the more skilled player in tight spaces. He often started from a deeper inverted position to finally settle between the lines, in the position Bernardo Silva took against Huddersfield. Thiago then would stay deeper. With Alaba, Bayern was flexible on the left side. They could either use the Austrian to attack or he opened space for his winger.

Maybe, Pep Guardiola will use Benjamin Mendy in a similar way. Especially, when the French defender has space and can start a dribbling he could be a weapon for the Citizens. His role would differ from the one Alaba had at Bayern because they possess different skill-sets. However, influenced by that Guardiola could use Mendy differently throughout a game which would cause major problems to the opponent´s defence. As I said his dynamic and dribbling ability could be useful in the halfspace to break the defence while maintaining a good structure to prevent counter-attacks.

Benjamin Mendy´s role and the changes Pep Guardiola made were extremely interesting. Mendy gives the successful Citizens a new option to attack which they didn´t have last season. His combinations of technical and physical attributes will cause problems for many coaches who try to stop Manchester City.

Transfer Talk: Sergio Reguilón – A left-field option at the left-back...

Pep’s plan: Why Manchester City might not feel the effects of...

Transfer Talk: Could Aubameyang be a temporary solution to City’s number...