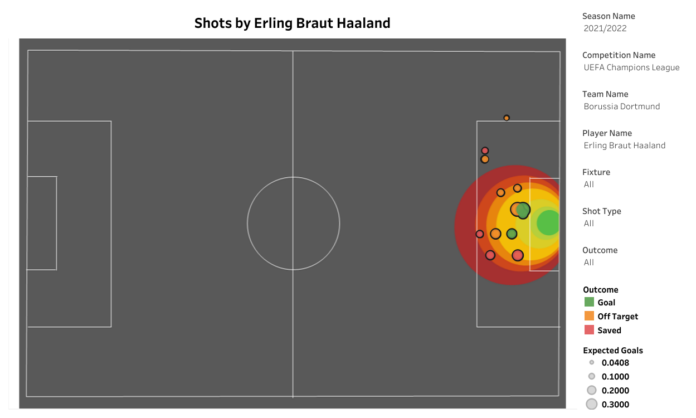 For all of Manchester City’s undeniable brilliance, there remains a similarly inevitable weakness that continues to undermine the side’s ability to succeed in the Champions League.

While City’s galaxy of talented and technically brilliant midfielders consistently dominate matches, for example, they are occasionally let down by both a lack of ruthlessness in attack and weakness in the defensive third.

We’ll explore this in more detail below, while asking whether the signing of Erling Haaland is enough to secure City a UCL triumph?

In the UCL final of 2021, City were favourites to beat domestic rivals Chelsea and win their first Champions League crown. However, having been out-thought by Blues’ boss Thomas Tuchel in recent league and FA Cup defeats, Pep Guardiola arguably over-analysed his selection and started the final without a recognised striker or holding midfielder.

This highlighted City’s failings in detail, as the attack was rudderless and lacking in cutting edge while Guardiola’s men were constantly exposed by waves of Chelsea counter-attacks.

Last season, City looked to have improved and completely dominated their two-leg semi-final against Real Madrid. Once again, however, a lack of ruthlessness in front of goal (during both legs) cost them enormously, while an inability to resist Madrid’s outstanding attack also undermined their chances of success.

City were also incredibly weak aerially in the closing stages of the second leg, as Madrid packed the box and supplemented the height of Karim Benzema with Rodrigo and centre back Éder Militão.

This trio dominated City’s backline who simply couldn’t cope with subsequent balls into the box, as they struggled to both stop the supply at source or deal with the threat centrally.

Ultimately, the cut-price £51 million signing of Haaland represents outstanding business, with the Norwegian forward prolific in front of goal and particularly capable in Europe.

To this end, Haaland scored an incredible 86 goals in just 89 appearances for previous club Dortmund, including 15 in just 13 ULC matches. Overall, he has 155 career goals in 200 games, while plundering 27 goals in 25 Champions League appearances.

With these numbers in mind, he’s also well-placed to solve City’s occasional lack of cutting edge in front of goal, which often manifests in the biggest games where outcomes are decided by the finest of margins.

The question that remains, of course, is can Haaland’s presence in front of goal also compensate for City’s other deficiencies?

The short answer may be no, with the Citizens lacking depth and defensive strength in the full-back areas and a centre half who is dominant aerially in the defensive third. Brighton left back Marc Cucurella could provide a solution to one of these issues, but Guardiola has yet to be linked with any type of central defender.

However, the bookies have made City early favourites to win next season’s UCL, at an average price of 11/4. This theoretically offers good value given the acquisition of Haaland, especially if you leverage the Natural8 welcome offer and unlock a 200% deposit match offer.

Of course, City must also overcome significant psychological baggage to prevail in Europe, but what cannot be denied is that the signing of Haaland (and potentially Cucurella) affords them the best possible chance of success next season.

Going to the Etihad Continues to Transform into New Experiences