The explosion of tactical analysis in football has brought a tactical revolution in football strategy. Teams are actively using analytic data to minimize low-value shots and maximise every scoring opportunity. My previous article, Premier League Moneyball, details this revolution.

One clear outlier that is bucking the trend is Jonjo Shelvey. I’ve detailed his extreme low-value shooting habits before in my article about Newcastle. Here is a refresher on how inefficient Jonjo’s shooting decisions are.

Last season Jonjo took 37 shots from outside of the penalty area. He converted on 1 of those shots. Here is his lonely green goal dot from his goal chart from last season. 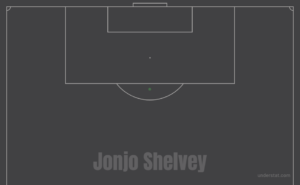 Not only did he only score 1 goal but he only put 9 shots on goal out of his 37. Here is his shot chart from last season. 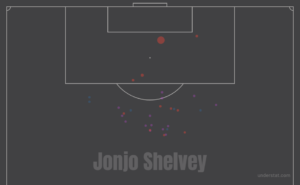 Who is Manchester City’s Jonjo Shelvey?

De Bruyne is one of the league’s elite players. Last season for Manchester City he scored 8 goals and had 16 assists in helping lead them to the title. The 16/17 season he had 6 goals and 18 assists and the 15/16 season he went for 7 goals and 9 assists.

How in the world is Kevin De Bruyne similar to Jonjo Shelvey? 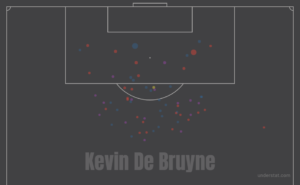 But De Bruyne had 8 goals to Shelvey’s 1

The inside the penalty area and set-piece shooting profile we can call Good Kevin. There is no problem with Good Kevin’s decision making.

That leaves us with 51 shots from open play that De Bruyne took from outside the area. Of those 51 shots he scored 3 goals. That is a conversion rate of 5.8%

Let’s consider these 51 outside the penalty area shots as a separate player. That player would have a near identical profile to Jonjo Shelvey. Let’s call this separate player Bad Kevin.

Raheem Sterling had 87 total shots with 18 goals for a conversion rate of 20.6%

Gabriel Jesus had 56 total shots with 13 goals for a conversion rate of 23.3%

David Silva had 54 total shots with 9 goals for a conversion rate of 16.7%

Bad Kevin had 51 total shots with 3 goals for a conversion rate of 5.8%

What Should KDB do instead of shooting from distance?

De Bruyne is surrounded by talented highly efficient scorers. Taking a shot that will only result in a goal 5.8% of the time is not a wise option. He is going to need 17 shots to score 1 goal.

I will provide the same advice for Kevin De Bruyne as I wrote for Newcastle’s Matt Ritchie. Instead of blasting the hero shot his team would be better served with him finding a better option, a more dangerous option.

If the option is De Bruyne shooting OR playing a through ball to Sterling/Aguero/Sane/Jesus/Silva the choice should always be to play the through ball. A successful through ball will result in a chance ranging from a 16.7% to a 23.3% shot!

The data tells us that De Bruyne needs to complete a through ball to Silva only 33% of the time for that pass to be a better option.

The data tells us that De Bruyne needs to complete a through ball to Gabriel Jesus only 25% of the time for that pass to be a better option than the 5.8% outside the penalty area shot.

Fans might not agree with the data as they want the spectacular goal, but the data shows that De Bruyne needs to play to his strengths which is playing the dangerous passes instead of the hero shots. He has 16 and 18 assists the past two seasons at Man City. That number could be even higher!

Despite being the top dog in the Premier League there is room for even more attacking efficiency. My advice to Pep is to get rid of Bad Kevin and encourage only Good Kevin. Pep please get Kevin De Bruyne to stop shooting from outside the box as he is your Jonjo Shelvey.

Man City Lose Ground to Liverpool in the Title Race After...