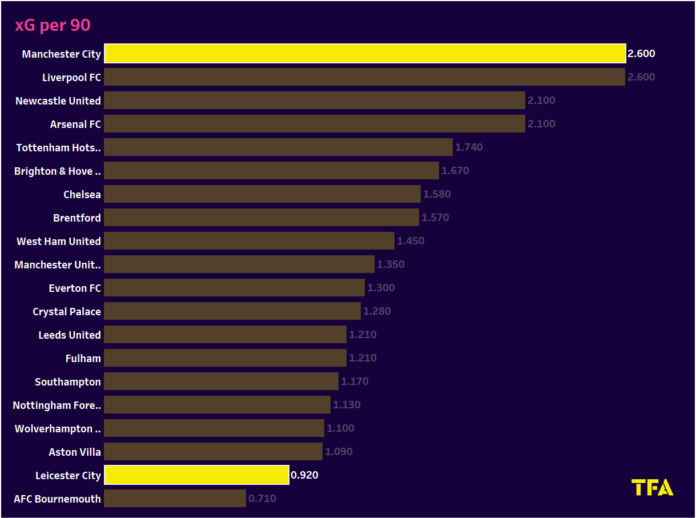 Round 14 of the English Premier League will kick off with defending champions Manchester City travelling to the King Power Stadium to take on the in-form Leicester City side. Manchester City sits in the second position and are two points behind Arsenal. The Foxes, on the other hand, have moved out of the relegation zone after some positive results in recent matches. The last time these two teams met, they played a nine-goal thriller that ended 6-3 in favour of the Manchester side.

Leicester City sits just above the relegation zone with three wins, two draws, and seven losses. These three wins came in the last five matches played. The Foxes have scored 21 goals and conceded 24 goals. They average 0.99 xG and 1.39 xGA per match.

Manchester City, on the other hand, returned to winning ways after a 3-1 victory over Brighton in the last round. Pep’s men have won eight, drawn two, and lost one game this season. They have scored 36 goals with an average xG rate of 2.39 per match. The defence has conceded 11 goals and averages 0.81 xGA per match. Manchester City averages 34.3 positional attacks and 2.2 counterattacks per match. They always look to build-play and apply constant pressure on the opposition.

The best attack against the second-worst defence 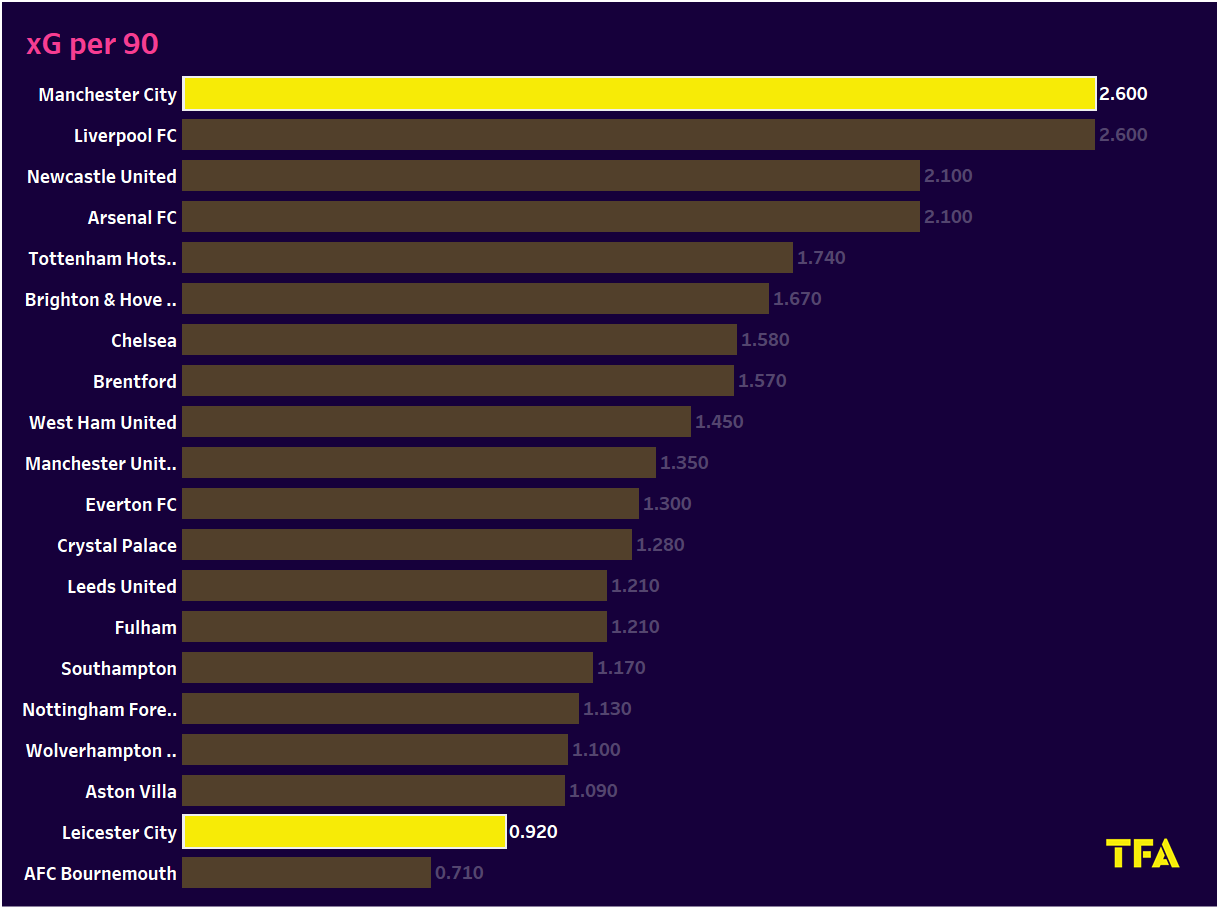 Leicester City’s defence will have a tough day when they face the highest goal-scoring team in the league. The Foxes have struggled to defend and conceded the second-highest number of goals. Manchester City scores three goals on average per match, while their opponents concede two goals per match. However, Leicester City have shown a lot of improvement in the last five matches and have conceded only two goals and kept four clean sheets. The defence will be tested against a side that has the highest xG rate per 90 minutes. Leicester City have also struggled to create enough threats and have the second-lowest xG rate. One of the reasons behind this is the number of shots. They average 9.7 shots per match, while their opponents average 16.2 shots. Looking at the current form, Manchester City will have to find a way to beat this Leicester defence. 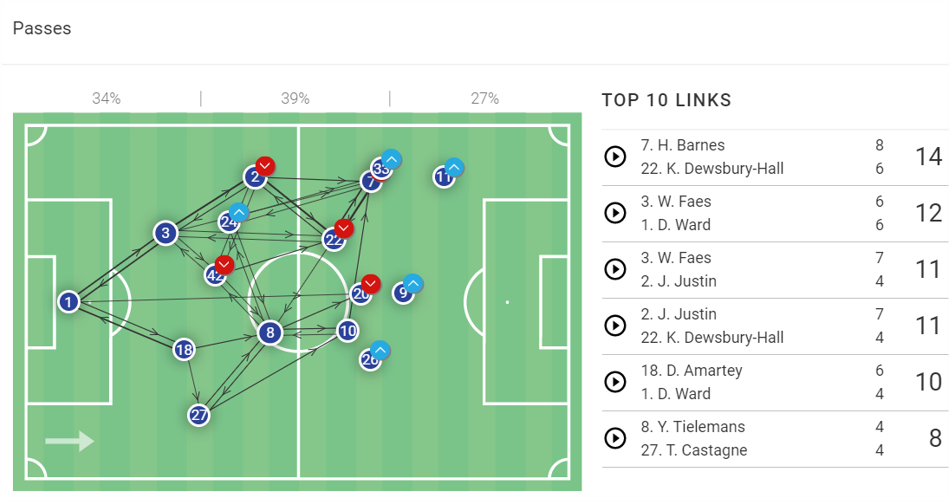 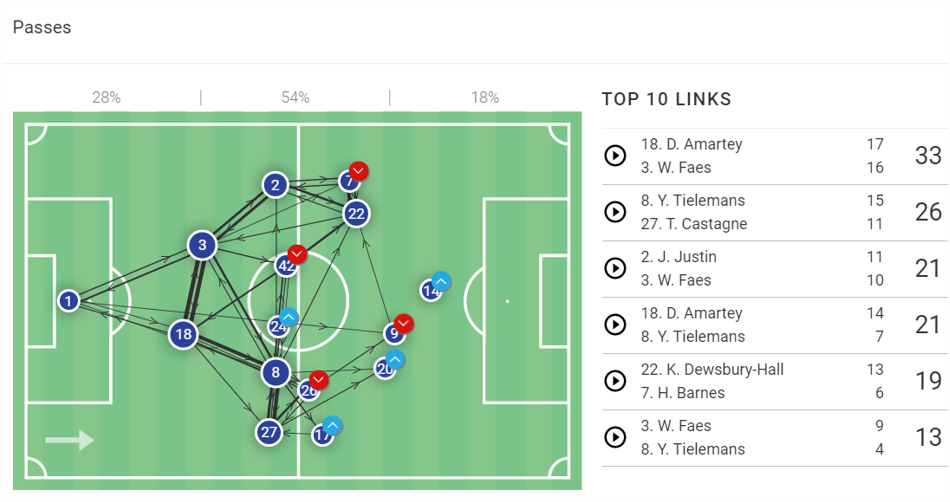 The Foxes have scored 11 goals in the last two matches and conceded only two goals. Brendan Rodgers has made some tactical changes and that has helped them improve the attack. Leicester City have a strong left-sided attack. They have exploited the opposition’s defence from that side in the last two matches, and that has helped them to score six goals. The first viz shows the average position and pass links in the previous match. Leicester City played a high line on the left in that game. The Foxes average 27.5 positional attacks and 1.67 counterattacks per match. They will look to be more efficient with their attacks against the defending champions. 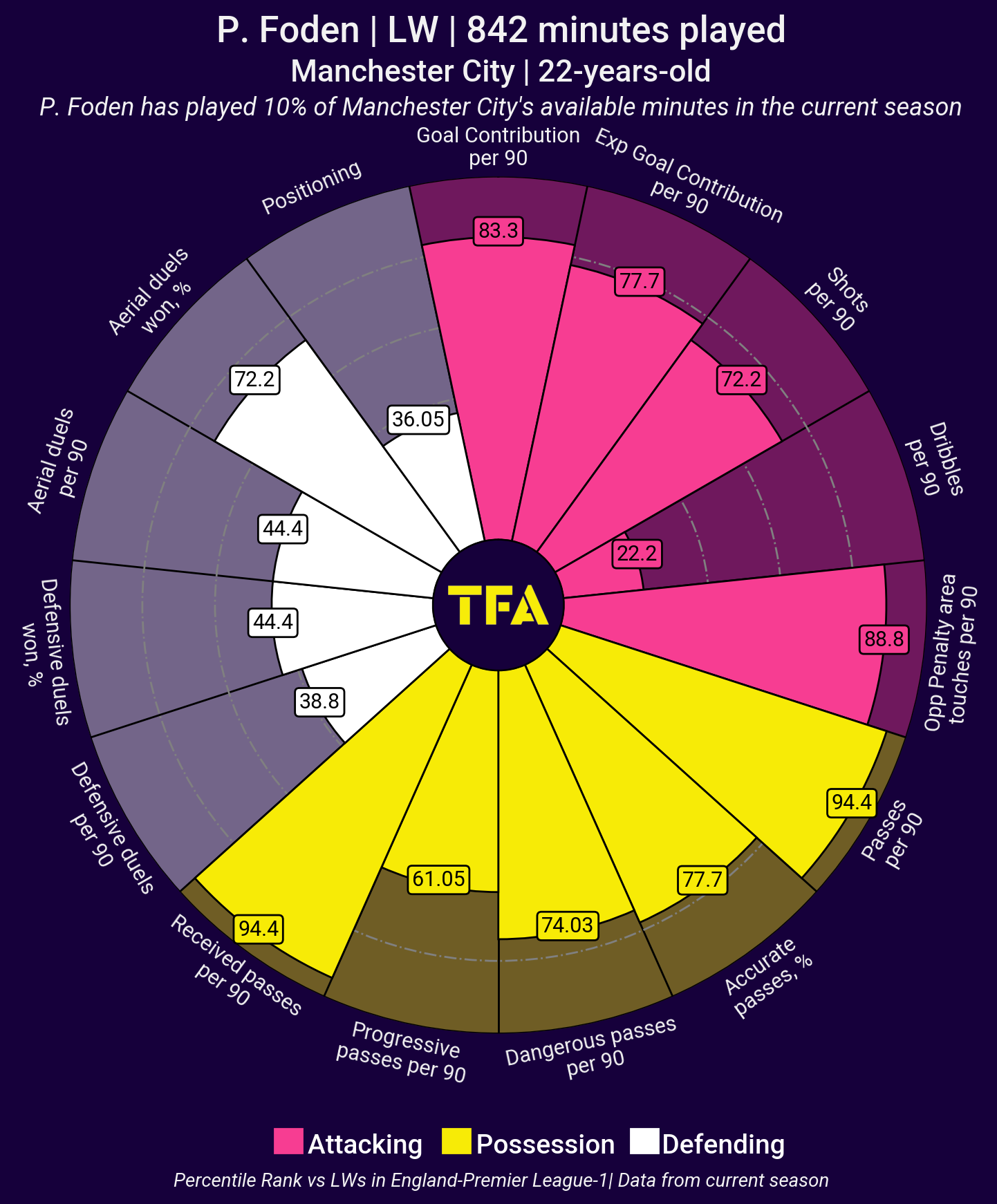 Phil Foden is the second-highest goalscorer for Manchester City this season. The 22-year-old has netted six goals and also has three assists to his name in 11 English Premier League appearances. He plays on the left wing but is likely to play on the opposite side in this match. The above viz shows the percentile rank of the player in comparison to other left-wingers. We can observe that he demands the ball and can also pass the ball. The goal contributions are also high, and the youngster is also ever-present inside the opposition penalty box. He has scored four goals this month and will look to end it on a high. 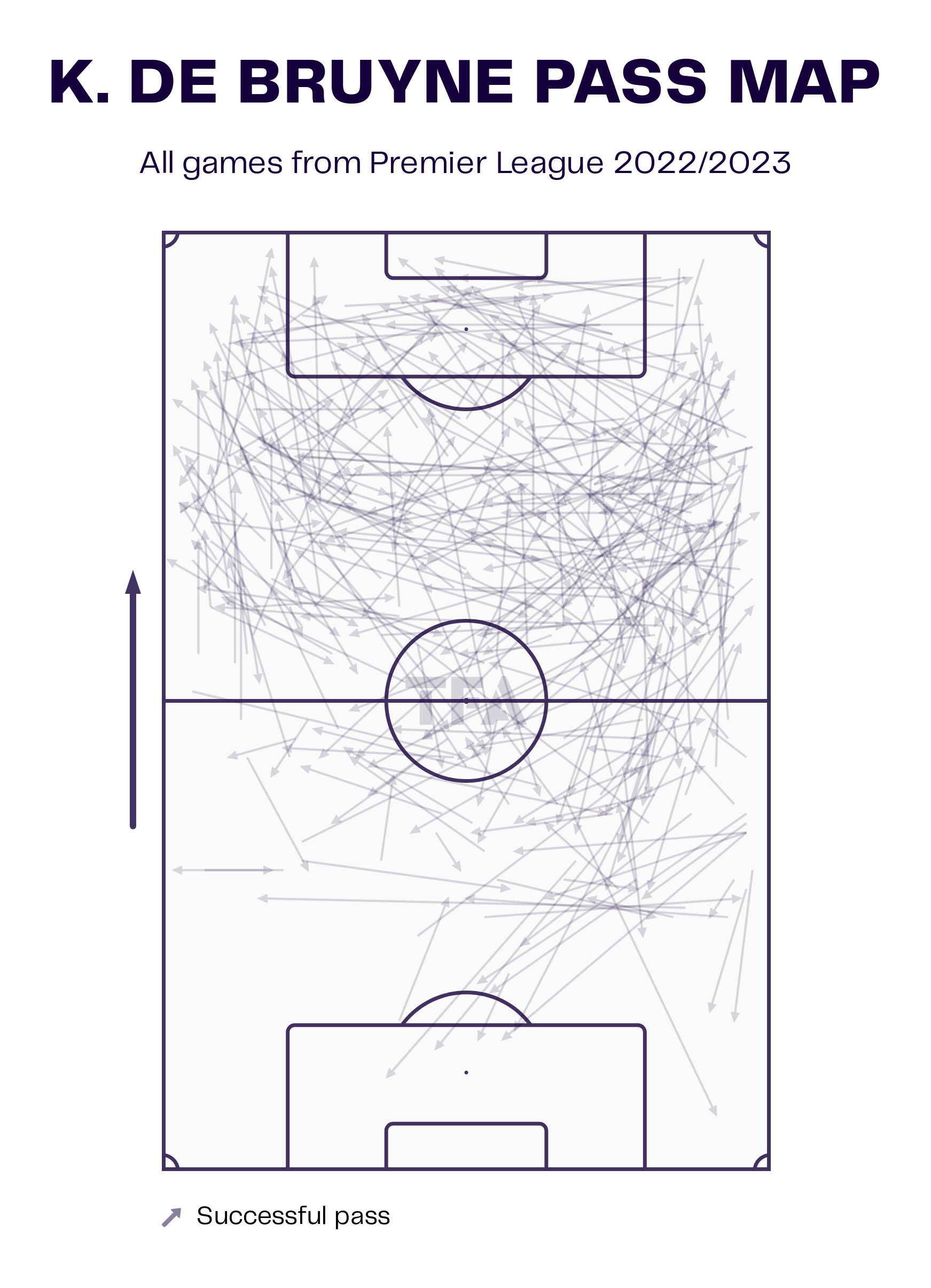 Kevin De Bruyne scored his second goal of the season after a spectacular strike from outside the penalty box. This season he is playing at a different level when it comes to goal contributions. The Belgian has nine assists and will look to take his tally into double figures in this match. The above pass map of the player shows that he has distributed the ball to different areas on the pitch. Some of the passes are directed towards the flanks, while others have landed inside the opposition penalty box. He will be the main creative force in this match.

Leicester City have some positive news in their camp as Wilfried Ndidi and Jonny Evans are expected to return after recovering from injuries.

Manchester City could be without Erling Haaland for this fixture. The Norwegian was taken off at halftime in the midweek match against Borussia Dortmund. However, the injury is minor and Haaland might start or feature off the bench. Kyle Walker is still out alongside Kalvin Phillips.

Manchester City will look to breach Leicester City’s defence. They have players who can win games with individual brilliance. Erling Haaland could be a big miss in this match. The Foxes will look for an upset and look to continue their good run of form.