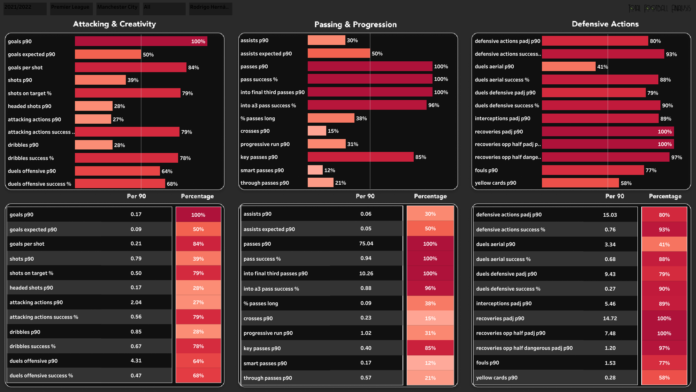 Manchester City‘s last-gasp 2-1 win against Arsenal was their 17th win of the season as the Cityzens move 10 points above second-placed Chelsea. Manchester City did look a bit shaky at times, but Guardiola will likely not be too worried by the team’s performance as a whole. Any team in the world would feel the effects of playing three games in six days with a chance of injuries and Covid-19 absentees.

City have become an unstoppable force this season and have won 11 consecutive games, which has helped them gain this 10 point lead. Through these impressive performances, there has been one man who has been a vital part of their squad and has put up some brilliant performances for them, and that is Rodri. The Spain international has been in superb form for Pep Guardiola’s side this season after an up-and-down first two years in English football. His performances in each game might go unnoticed, but he is the heart of the team operating from the centre of the field, controlling the pace of the game.

Guardiola looks for players who can combine positional discipline with high-energy pressing while keeping possession of the ball to start attacks. Before Rodri, Fernandinho had the experience to quickly master the role following Guardiola’s arrival in 2016. Rodri has shown he can fulfill the requirements and is now performing consistently to be a key aspect of Guardiola’s side.

This is a different Rodri from his two previous seasons at City, strengthened by growing confidence and belief in his ability. He has become a midfielder that is prepared to direct his teammates around, to break into attacking positions as he did against Leeds, or to smash in 25-yard strikes like his screamer against Everton. 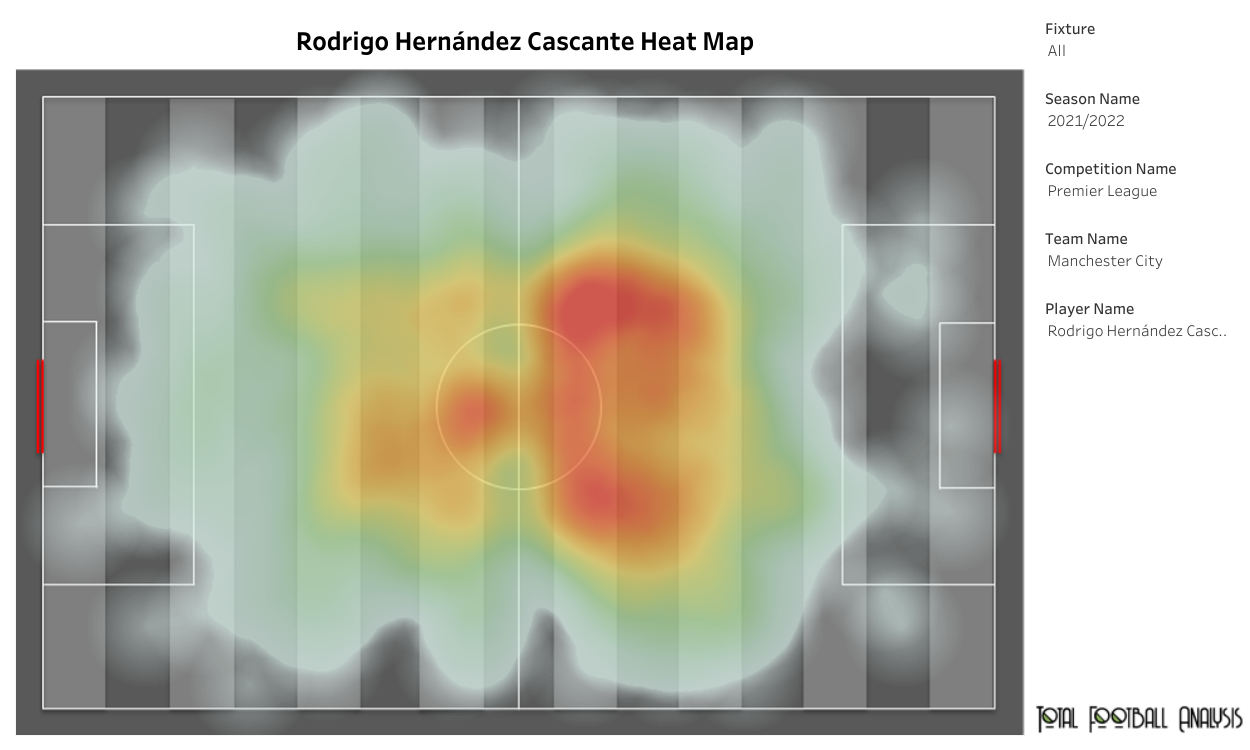 Rodri is one of the most crucial players to control how Pep wants his side to play. In 2019-20, City did not play to Rodri’s strengths. He was repeatedly left exposed to counter-attacks. This season Guardiola has perfected a system to get the most out of the Spain international. His heatmap indicates that he has been ever-present in the midfield and has covered a lot of ground trying to distribute the ball and also create space to receive it. 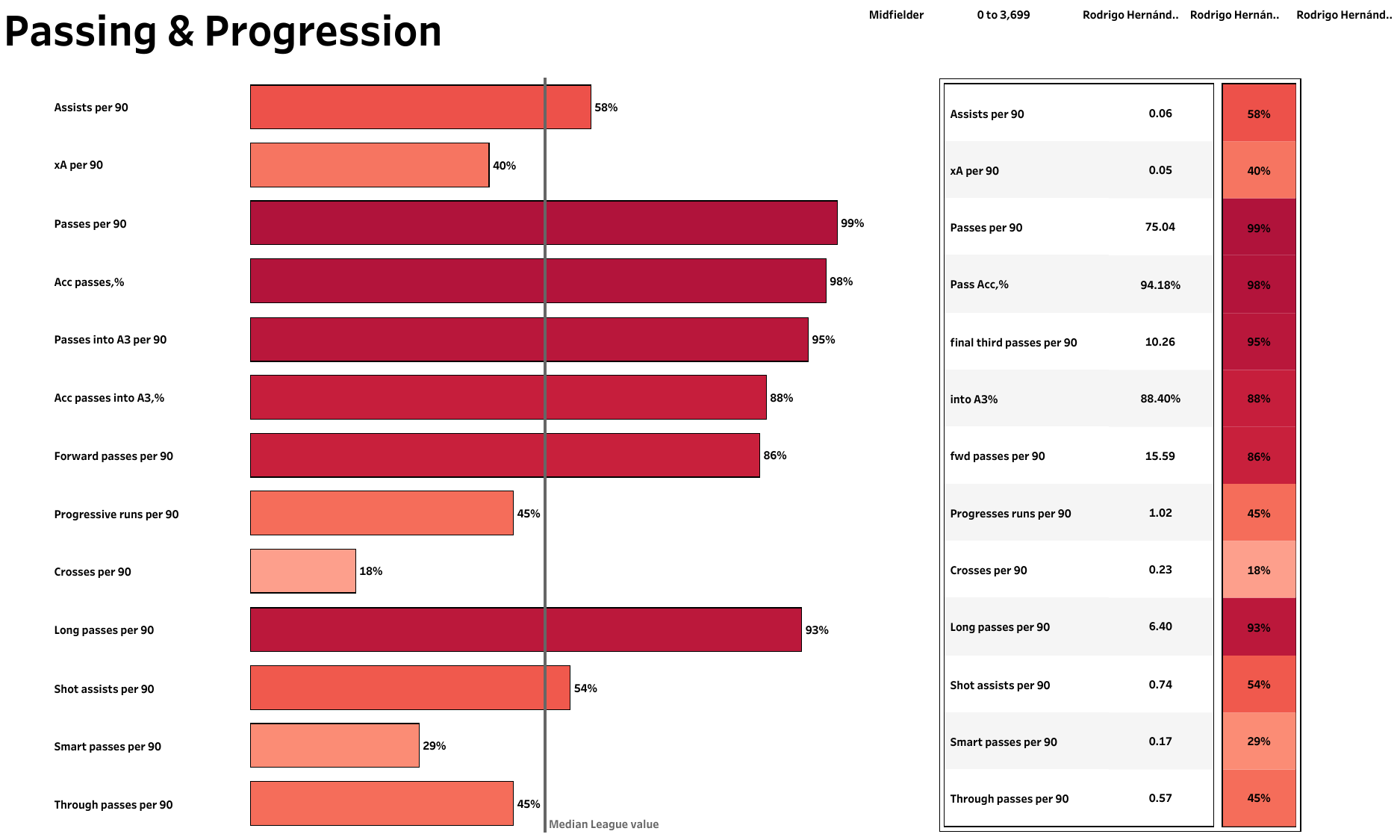 The above visual shows us the passing and progression stats for Rodri. As seen in the visual, Rodri has attempted a higher number of passes per 90 minutes and has a pass accuracy rate of 94.18% every game. He also has an accuracy of 88.40% from the passes that he has played into the final third. 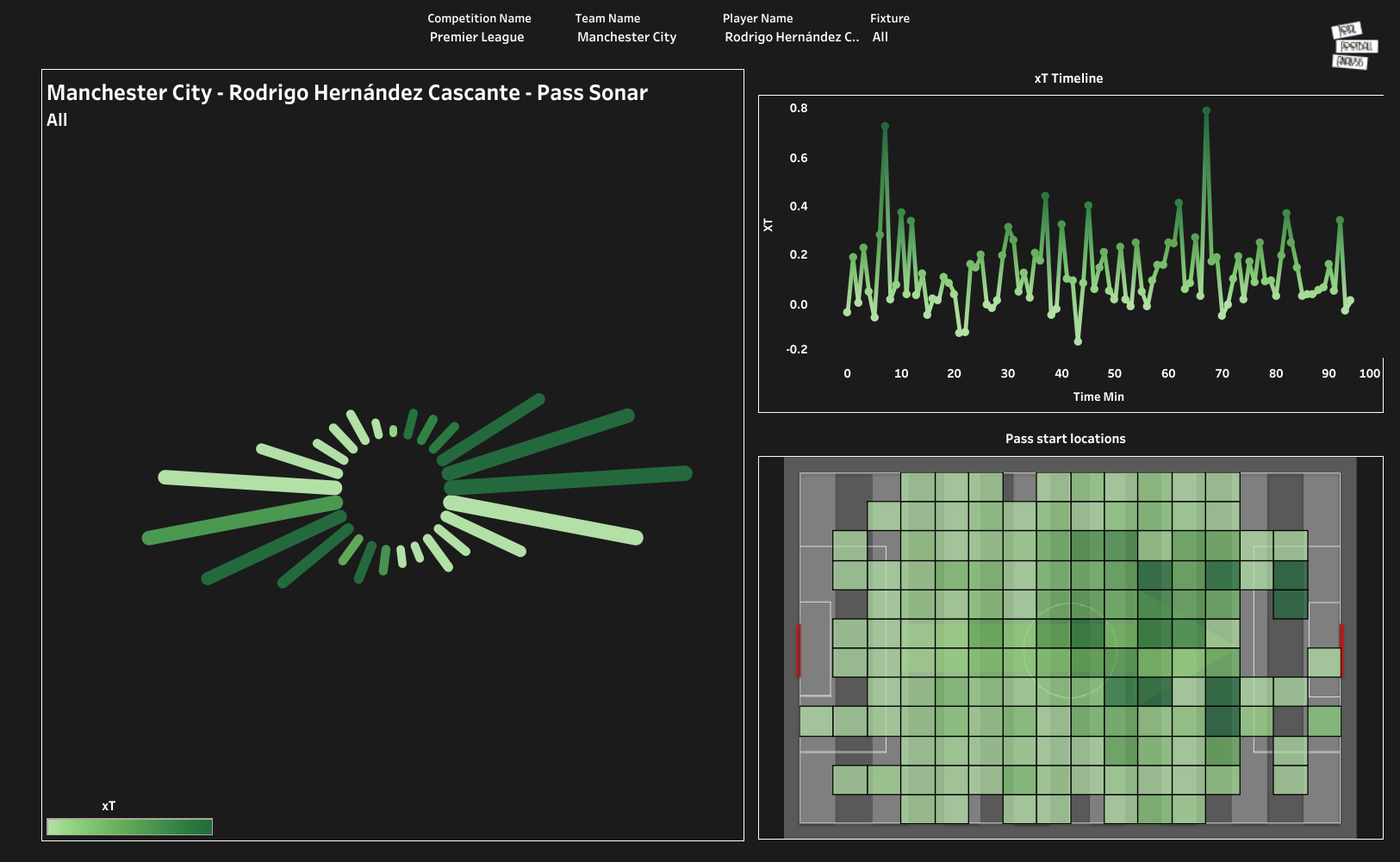 Playing in a number six role, a position usually associated with chance creation from deep, Rodri attracts the attention of pressing attackers to free up space for the full-backs on either side of him. The 2-3-5 system that City tend to use when in possession means that Rodri always has at least one free man to pass to and if not, then an attacking midfielder drops deep to create a man advantage and offer a passing option. The pass sonar indicates that Rodri has a high xT from the through balls that he has played into the final third. The pass start location pitch map shows us that most of the passes that he has played from the final third have a high xT. 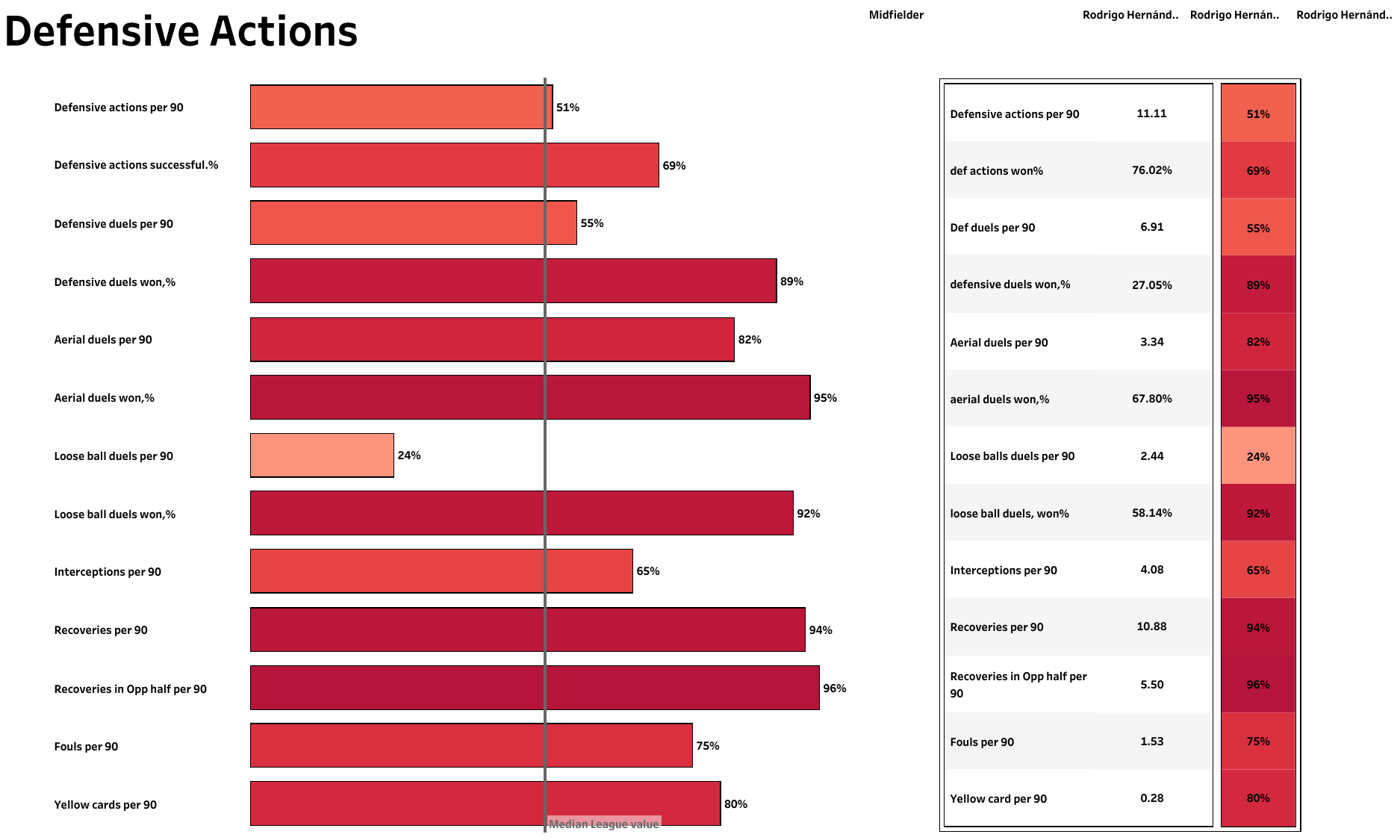 Rodri is one of the most intelligent defenders in the game. His positioning and reading of the game are very impressive. The above visual shows us the defensive metrics for Rodri in the Premier League this season. He has a high win percentage in winning aerial and loose ball duels. He has been able to complete 76% of the defensive actions he attempts per 90 minutes. His defensive talent is a large part of the reason why he’s drawn comparisons to Barcelona midfielder Sergio Busquets, a man whom City manager Pep Guardiola coached in the Barca Youth Academy and brought into the first team. 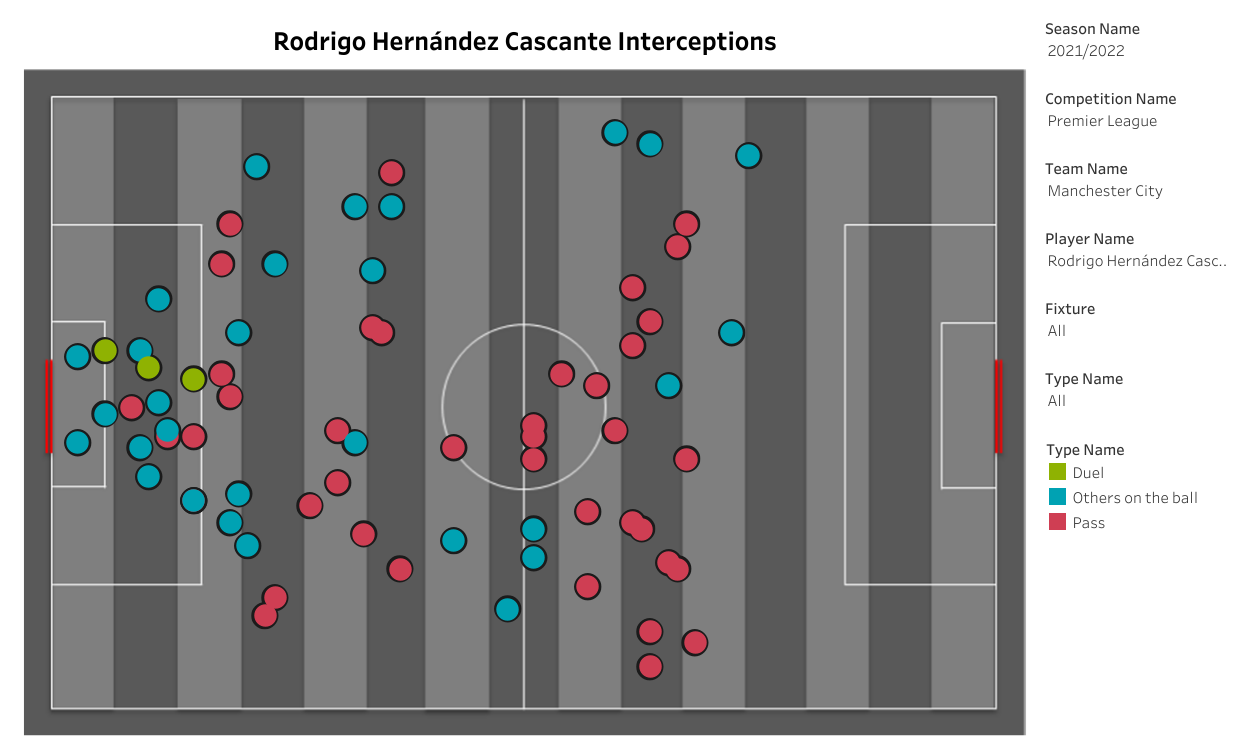 Defensively, he is a player that knows where to position himself on the pitch to cut out counterattacks, making use of occasional tactical fouls when required. He’s a constant interceptor of the ball, breaking up attacks with his interceptions and perfectly timed tackles. As seen in the above visual, he has a high number of pass interceptions higher up the field so that his team can start an attack from the opposition half. Most of his interceptions when the player is on the ball are in his half in the defensive third.

It’s a position where players can never stop learning under Guardiola, but Rodri is starting to become a master of his craft. Far from being left out of key games in the future, he is becoming one of the first names on the Man City teamsheet. City still have a long way to go to defend the Premier League title, but the way they are performing now does indicate that they will be successful in doing so.

From One De Jong To Another

Transfer Talk: Angeliño – Should Manchester City attempt to buy back...

Under the microscope: Can John Stones take Laporte’s place if he...

Under the microscope: Reliable Rodri – Why Manchester City want to...